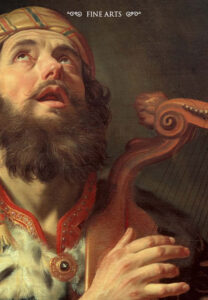 The dinner hour approached as our riverboat sailed up the Rhine. Passengers, dressed as requested in red or white, entered the ship’s sleek dining room that was asparkle with crystal, china, and silver candelabras decked in clusters of tomatoes, purple grapes, and bunches of scallions. Alongside them perched baking potatoes, parsnips, and turnips, held up on tripods of silver forks!

The dinner was long, filled with music and laughter. How would the cast bring this delightful evening to a finale, I wondered? The answer came when the sopranos intoned the opening phrase of “Va Pensiero,” arguably the most beloved melody in the Western canon. Many guests joined in, rusty on the Italian words but enthusiastic in their singing. Those unfamiliar with “Va Pensiero” glanced around in slight confusion: What tune was causing eyes to sparkle and voices to raise?

“Va Pensiero” is the principal chorus from Giuseppe Verdi’s opera Nabucco  (1842), a drama about Babylonian King Nebuchadnezzar II that weaves together plot threads from 2 Kings, Jeremiah, Lamentations, Daniel, and verses from the Psalms. This chorus opens the second scene of Act Three as the enslaved Hebrews, broken by the loss of the First Temple in 586 B.C., languish on the shores of the Euphrates, longing for their homeland.

At the original premiere, the audience exited the theater singing tunes from the opera, singularly ensuring it would be a success. Not much earlier, Verdi, in mourning over the death of his wife and two children, had sworn never to compose again. Yet he was still under contract to produce a new opera for La Scala. His friend and mentor Bartolomeo Merelli pushed the text for Nabucco into his hands and urged him to take it home. Verdi (according to his reminiscences) entered his flat, tossed it onto the table, and the pages opened to these words:

Go, thought, on wings of gold; go settle upon the slopes and the hills, where, soft and mild, the sweet airs of our native land smell fragrant!

Verdi was transfixed. A perfect melody arose in his mind. He penned the chorus quickly and, from it, the whole opera unfolded.

Whether or not Verdi’s account is exaggerated, Nabucco brought about the  composer’s complete revival. The role he wrote for the heroine Abigaille also portended good fortune, as the soprano, Giuseppina Strepponi, became Verdi’s lifelong muse. Without Strepponi’s support, the world may never have heard Rigoletto, La Traviata, or Aida. The chorus “Va Pensiero” kept its popularity, regularly stirring audiences around the world.

Still, how does a tune turn into a heroic emblem of freedom? As a first step, the melody needs to be clear and generally singable. It must soar, lifting hearts along with the rise and fall of its phrases. And it needs to be memorable after one or two hearings. But these musical qualities are not enough.

The text, of course, plays the second part. The words must tap into historical events or express universal truths in ways that grab the attention and do not fade. The poet writing Nabucco‘s libretto, Temistocle Solera, was an experienced craftsman. For this chorus, he took his inspiration from Psalm 137 (By the Waters of Babylon We Sat and Wept) and added concrete images (“fallen towers,” “soft aroma”) and clear calls to action: “Go, thought” (for we are enslaved and cannot) and “Fly on wings of gold.”

But even the literary value of a text is not enough. A third ingredient requires the music to pass successfully through challenges. These can be intrinsic to musical style and performing techniques, or they can stem from difficult circumstances that mark drastic times. If the latter, the music must speak to these challenges.

“Va Pensiero” exemplifies this well. Verdi lived during turbulent times. Across Italy a consortium of writers, artists, and citizens struggled in the fight for Italian 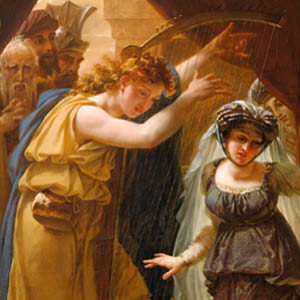 independence known as the Risorgimento (Rising Again). Their goal was to create a free, unified Italian nation. This effort culminated in 1861 with the formation of a Kingdom of Italy governed by a modern parliament and headed by an elected king. Scholars dispute the degree to which “Va Pensiero” served as their official rallying cry, but there is no dispute over the emotional effect of the chorus’ line, “O mia patria, si bella e perduta” (O my country, so beautiful, and lost). At Verdi’s funeral, “Va Pensiero” echoed through the streets. From that time forward, it has served as an unofficial Italian national anthem.

Still, one more element has to descend for a piece of music to be deemed heroic, and this quality is difficult to describe. Simply put, the music must shift the focus from the present moment to something greater. That was the quality that caused our guests at “Pasta-Opera” to put down their forks and lift their faces towards the music.

Verdi went on to compose a string of glorious operas proclaiming courage, patriotism, and self-sacrifice. Some of the plots were personal (La Traviata); others confronted historical events and the foibles of mankind with brutal honesty. The compohttps://www.britannica.com/topic/Orpheus-Greek-mythologyser was handsomely rewarded for these accomplishments, but a historic tribute came when his very name became an acronym for Italian freedom. When officials forbade the mention of Vittorio Emanuele (1820- 1878), king of Sardinia whom patriots hoped to elect as Italy’s new king, no one could stop patriots from shouting “Viva Verdi”: Viva V[ittorio] E[manuele], R[e] d[i] I[tali] (Long Live Victor Emmanuel, King of Italy). More than 150 years later, these incidents are not forgotten.

“Va Pensiero” has one last strength: It is a choral work, even though many of its famous strains are sung in unison. Choral singing creates an automatic community. While an individual heroic character may be powerful, few things match the heroism of a community united in an honorable cause. Particularly now, when our Western culture has fractured and fragmented, the need to rediscover the power of community rises above a luxury. It is a force for the healing of our woes. Music has always had the power to conquer the darkest obstacle (consider the story of Orpheus). Endlessly faceted in its expressivity, music’s power to rouse, extol, exhort, and unify has never diminished. We need only introduce ourselves to its language and open doors so it can enter our lives.