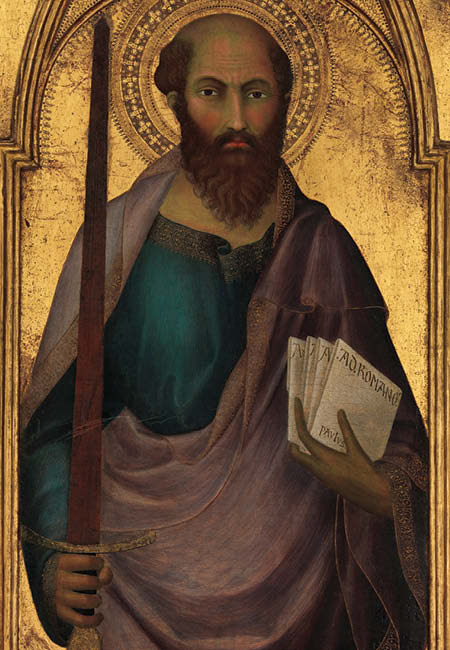 A couple of summers ago I was part of a panel of classical educators discussing the importance of our Western heritage and the obligation we have of passing it on through the education of our children. The audience of homeschool parents listened attentively, and those of us on the panel answered questions from the audience.

But near the end of the question and answer period a young black woman stood up. She explained that she had been about ten minutes late and had not heard the first part of the session, but, she said, she was appalled when she heard us defending Western civilization. She explained that, to her, Western civilization represents racism and oppression.

The ensuing discussion seemed to resolve many of her concerns, but the fact that she thought this way about our cultural heritage in the first place is significant.

I have heard similar comments in other discussions among parents and teachers. Although Western civilization is still generally acknowledged as something to be valued and upheld, it is increasingly assailed for the misdeeds of Western people, misdeeds that, according to some, call Western civilization itself into question.

But in order to criticize something, you have to know what it is, and it is doubtful most of the critics of the West could adequately tell you what it is. What do we mean by the expression “Western civilization”?

Western civilization is the body of ideals and values deriving originally from the cultures of Athens, Rome, and Jerusalem, transformed and completed by Christianity.

That Western people and nations have engaged in base behavior is undeniable. Abuse of power, corruption, hatred, racism, sexism, slavery—all have characterized Western societies at one time or another. These things, of course, have occurred in all cultures. But should any culture be viewed as simply the sum of its worst actions?

Several years ago, I had a public disagreement with a prominent conservative blogger who had written a post titled, “No, America Is Not a Great Nation.” In my response, I said that

He is right that Americans do some really bad things―and lots of them. Some of them are even done in the name of America. But, just as he has gotten a good list of symptoms, he lapses into a bad diagnosis.

In fact, the disease metaphor is an apt one, since he is basically blaming the patient for his sickness.

The blogger was engaged in reasoning that is typical of the critics of Western civilization. The problem is a failure to make a basic distinction: the distinction between people’s acts and the principles and virtues they profess to uphold.

The distinction many critics of traditional American culture (a culture which is inherently Western) fail to make is between America as an ideal and America as a practical reality. If the problem is the practical reality, it is not necessarily the fault of the ideal. In fact, the actions that critics often point to almost always involve a failure to live up to some ideal, and frequently the critics appeal to the very ideal of the civilization they are criticizing in order to criticize it.

This question comes up in discussions about classical education, which studies the cultures of Athens and Rome. Some people point out that the Greeks and Romans did some pretty bad things. My response is always the same: We admire these cultures―and judge them―on the basis of their ideals, and our criticisms of them usually involve the failure of people to live up to their own ideals.

What is wrong with America is Americans.

The problem with the argument that holds Western civilization responsible for acts that violate the very principles it upholds is not only that it is wrong, but that it is self-defeating.

By what standards do the self-professed critics of the West judge it? Do they judge it on the basis of the values and ideals they have learned from some other culture? If so, which culture is it? The traditional cultures of the East and those of many of the local cultures of the developing world were historically just as rife with racism and oppression, if not more so. 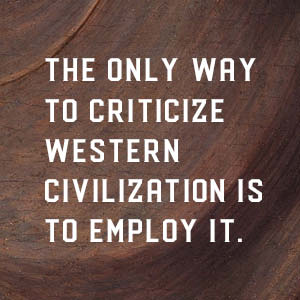 Yes, Western nations engaged in slavery, but the movement that brought the institution of slavery down employed the criticisms and prescriptions of Western thinkers and writers. Oppressors often appeal to some principle they claim justifies their oppression, but they are then opposed by those who appeal to the same body of principles in defense of their freedom.

Only in the West were the ideals of freedom and equality held as a universal ideal in the light of which all actions were to be measured. The West has produced its share of despotism and oppression, but there has always been its own tradition of thought—going back to Athens and Jerusalem—from which to provide a court of appeal.

We see this self-critical impulse nowhere more conspicuously than in the Hebrews, whose most severe shortcomings can be found in—and judged by—their own sacred texts.

One way of seeing the universality of Western ideals is to look at those who challenged the evils in which Western people often engaged.

When Frederick Douglass sought to equip himself to argue the cause of abolition, he didn’t find the weapons for this fight in some other civilization. He found a ready arsenal in Western civilization itself. Douglass’ owner had illegally taught him how to read, and when he was thirteen years old he managed to purchase a copy of The Columbian Orator, a collection of classic speeches edited by Caleb Bingham.

Douglass read the book, which contained the speeches not only of Americans like George Washington, Benjamin Franklin, and William Pitt, but classical figures such as the Romans Cato and Cassius. One of Douglass’ favorites was Cicero. He read and memorized these speeches. And in doing so, he approximated what we today would call a “classical education.”

He did not use this learning to attack the values of the country that had enslaved him. Far from it. He did exactly the opposite: He “mastered his masters’ language” and held Americans to their own ideals of freedom and equality—the standards America had itself obtained from the Western culture that produced it.

And what of the great civil rights leader Martin Luther King, Jr.? Did he revile the West as we hear some modern voices doing today? This list of required texts from the social philosophy course he taught at Morehouse College suggests not:

These were the works that contained, in one form or another, the ideals of Western civilization: not only the cardinal virtues of prudence, temperance, fortitude, and justice, but the Christian virtues of faith, hope, and charity.

Simόn Bolívar, the great liberator of Latin America from the yoke of Spanish control, was well-read in the works of Western history, and he appealed to them repeatedly in his case against the Spanish.

The thinkers who most influenced Gandhi, the great champion of Indian sovereignty, included Ruskin, Gibbon, Dickens, Tolstoy, and Plato.

America is also a primary example of this. The arguments of the founders were taken from the thoughts and writings of the British themselves, who, in turn, had imbibed them through the Greek and Roman works they had mastered, and through the Christianity by which they had received these works.

The Declaration of Independence was explicit on this: The British were not only wrong; they were violating their own principles.

The only way to criticize Western civilization is to employ it.

Many Western people have violated their own principles. But the solution to our problems is not to reject the West. The solution is to go back to our own classical Christian tradition. To do otherwise will only leave us bereft of the means to our renewal.