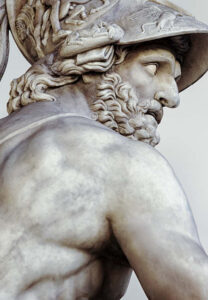 Not long after George Lucas’ Star Wars movies came out, it became widely known that he had used the classic myths as a grounding for the stories in his films. Lucas later acknowledged that he had been influenced by the writings of Joseph Campbell, an American professor whose most famous work, The Hero With a Thousand Faces, argued that there is one central story structure behind all classical hero tales and myths, which he called the Monomyth.

The Monomyth is a sort of narrative pattern in which there are discernable stages in the life of a hero, and Campbell maintains it is common to all great hero stories. Novelists, filmmakers, songwriters, and video game creators have confessed to having been influenced by Campbell’s idea of the Monomyth in creating their works. His theory has attracted many critics since the publication of The Hero With a Thousand Faces in 1949, and yet his observations will sound familiar to anyone versed in stories, classical and modern alike.

• The birth of a hero is often miraculous, frequently taking the form of a divine parent. Romulus, the legendary first king of Rome, is said to have been sired by Mars, the god of war.

• There is often an initiation of some kind, involving tokens of the hero’s paternity. Theseus is guided by his mother to the rock under which his father has left his sandals and his sword.

• Such stories frequently have the hero withdrawing from the world and preparing for greatness. Jason (of Jason and the Argonauts) is sent to the centaur Chiron (the teacher of Achilles), who teaches him how to ride, hunt, and play music.

• The hero must undergo a trial or quest. In penance for a great misdeed, Hercules is ordered by the Oracle at Delphi to serve King Eurystheus, who requires the hero to undergo the twelve labors for which he is famous.

• The hero also must undergo some sort of death, which casts him into the underworld, from which he rises again and then, finally, experiences an  ascension, apotheosis, or atonement. In the final and greatest trial of Gandalf the Grey in The Fellowship of the Ring, he faces the Balrog, who, falling into the abyss, pulls the wizard down with him, seemingly to his death. And yet, later in the story the three hunters are approached by a cloaked figure who reveals himself in an exalted form as Gandalf the White.

Some version of these heroic patterns is reprised in the myth and folklore of every civilization in history, from primitive tribes to modern popular literature and film: divine births, initiations, preparations, resurrections, and apotheoses.

Campbell himself takes note of this. The Virgin Birth of Christ, His childhood spent in learning from the rabbis, His Baptism, the withdrawal into the desert, the tempting by Satan, the Crucifixion, the Descent into Hell, and the Resurrection and Ascension into Heaven. These events form an almost perfect pattern of the Monomyth.

IS CHRISTIANITY JUST A MYTH?

And so comes the question: Is Christianity merely another form of the Monomyth? Is it similar to all the other myths of the world, having been fashioned by storytellers and transformed by enthusiastic and naïve adherents into alleged history?

That was certainly Campbell’s view, one mostly shared by other professional folklorists and cultural anthropologists. But there is another view, an older view. If we turn from the secular university scholars to the greatest of the early twentieth century writers who authored the works that became influential source material for more contemporary storytellers, we find an entirely different attitude.

What did writers such as G. K. Chesterton, J. R. R. Tolkien, and C. S. Lewis believe about the strange and uncanny correspondence between the Gospel story and the stories of antiquated myth?

Chesterton directly challenges the view that Christianity is just another myth in his famous newspaper debate with Robert Blatchford, the atheist publisher of The Clarion, published between 1903-1904. He turned the barrel of Blatchford’s gun around on him:

Mr. Blatchford and his school point out that there are many myths parallel to the Christian story; that there were Pagan Christs, and Red Indian Incarnations, and Patagonian Crucifixions, for all I know or care. But does not Mr. Blatchford see the other side of the fact? If the Christian God really made the human race, would not the human race tend to rumours and perversions of the Christian God? If the centre of our life is a certain fact, would not people far from the centre have a muddled version of that fact? If we are so made that a Son of God must deliver us, is it odd that Patagonians should dream of a Son of God?

In other words, the fact that the narrative pattern of the Christian story is found throughout history is a confirmation, not a refutation, of its historical truth.

The story of a Christ is very common in legend and literature. So is the story of two lovers parted by Fate. So is the story of two friends killing each other for a woman. But will it seriously be maintained that, because these two  stories are common as legends, therefore no two friends were ever separated by love or no two lovers by circumstances? It is tolerably plain, surely, that these two stories are common because the situation is an intensely probable and human one, because our nature is so built as to make them almost inevitable.

Chesterton, who was often accused of overusing the literary device of paradox in his own writing, pointed to the paradox in Blatchford’s argument:

The  Blatchfordian position really amounts to this—that because a certain thing has impressed millions of different people as likely or necessary, therefore it cannot be true.

Chesterton believed that Christianity was the “fulfillment of paganism”—that what the pagans knew intuitively, what they imaginatively searched for in their stories and myths, was what Christianity delivered. The mythical stories were simply imperfect attempts—through the flawed instrument of the human imagination—to try to grasp the fundamental archetypes at the core of reality, archetypes that spoke of a God coming to earth and ascending into heaven, taking the paradoxical form of a baby in a manger: 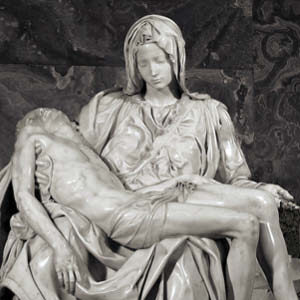 Lewis believed that man’s two central insights into the reality of the world were the intellect and the imagination. The intellect, he said, was the organ of reason, and the imagination, the organ of meaning. He was a passionate rationalist, versed in the ways of argument, but was also intimately familiar with the classical and Norse mythologies in which he saw a glorious significance. But he came to a juncture: He saw the imaginative appeal of Christianity, but he could not reconcile it with the rational requirement of historical truth. It was just another myth, albeit a great one.

His friend Tolkien thought quite differently. In his essay “On Faerie Stories,” Tolkien coins the term “eucatastrophe”—the unlikely turn in a fairy tale that produces the surprise happy ending. We can see it in Tolkien’s own writing when the evil Gollum steals the ring from Frodo just as Frodo has decided not to destroy it and to keep it for himself. Gollum, entirely unwittingly, falls into the consuming fire of Mount Doom, clutching the Ring and unintentionally destroying it. It is the bad ending suddenly turned into the good ending. It is of the same form as the Christian eucatastrophe, which is eucatastrophe in its highest form: the “defeat” of Christ at the Crucifixion that turns into the victory of the Resurrection. And it is a turn that is made even more perfect by the fact that it is true.

Lewis later was convinced, after Tolkien explained to him on a walk along the River Cherwell at Oxford, that Christianity not only has all the meaning of the mythologies (of which fairy tales are a type), but all the truth of reality. Christianity is the true myth. The Christian story, he argues, “is supreme; and it is true. Art has been verified. God is the Lord, of angels, and of men—and of elves. Legend and History have met and fused.”

In the writings of all the Inklings—the Oxford writers influenced by Chesterton such as Lewis, Tolkien, and Charles Williams—there is an implicit proposition: The Christian story isn’t merely one more instantiation of the Monomyth—it is, in fact, the Monomyth itself. Christianity is not just another story fashioned from some central pattern, but rather is itself the central pattern from which all other stories are made.