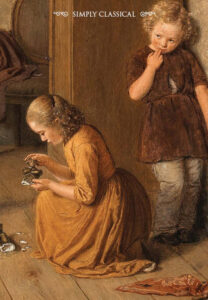 My son loves a good find. Antique malls and secondhand stores delight his mind. Yesterday he showed me his latest purchase, a set of old radio comedies on cassette to enjoy from his retro-tech cassette player.

My daughter is the same way. She once rescued a bedraggled doll with legs dangling. Michelle gave the doll an honored spot in her bedroom where she had displayed her homemade sign, “Sweet Valley Children’s Home.” Her collection of discarded dolls were named, clothed, schooled, and rocked to sleep.

All of this seems fitting because both Michael and Michelle know what it is to be discarded. I do not reference their biological mother, for she loved them and would have cared for them had she been able to do so. No, I’m referencing what my children often experience on a daily basis.

Michael’s conditions now include parkinsonism, with sluggish speech, and Pisa syndrome, aptly named by an involuntary, stiff leaning far to one side. His mind has always been “like a sieve,” in his words, but now the holes seem enlarged. Some of his brain conditions spark impulsive actions that baffle or infuriate others. Deterioration cannot be easily described, but it can be painfully experienced.

Currently Michael cannot work, except the occasional odd job a neighbor might ask him to do. Even our local sheltered workshop could not help, as it is set up like a factory requiring sustained attention, long hours of repetitive tasks, and productive speed. After just a few months working there, Michael began looking unkempt, was provoking and being provoked by others, and became sullen, angry, and despondent. Michael has often been discarded by those he sought to win, friends he sought to have, and jobs he sought to hold.

His twin sister has seen this more closely than anyone. Michelle is full of grace when Michael seeks to be restored to her good graces, accepting his apologies and welcoming him back as her friend once again. She has repeatedly been led to pray for her brother, console him, give him space when he is inconsolable, and enjoy his company when all is well. Perhaps all of this prepared her for our family’s most recent blow, when Michelle was called aside at her work.

The setting could not have felt more awkward. I had invited a Christian writer friend to join me for lunch at the coffee shop when Michelle would be working. I knew Michelle would enjoy serving us. On her best days she accomplished this with flair and grace. (At the funded coffee shop, people with special needs are hired intentionally.) She had been working there more than a year. Lately, though, Michelle had grown pale, tired, and easily overwhelmed. She had trouble concentrating and remembering what to do. Lab work had revealed a seriously low iron level, so her doctor had ordered an iron infusion at the hospital. At the same time her schizophrenia and obsessiveness seemed to be insidiously taking over her mind. While my friend and I were having lunch the manager asked to speak with me. I left my friend sitting alone at the table. Michelle joined me and we could see the frustration on her manager’s face. Hearing a stream of blunt words— “wasting money paying her” and “Michelle, If you don’t improve you cannot work here“—Michelle burst into rare, shamed tears and staggered to the door. “Go console your daughter,” my wise friend said, as she hugged me and left for home.

Later at home my husband asked indignantly, “Michelle is too disabled to work at the coffee shop that ‘serves up inclusion one cup at a time’?” But this had become a high-pressure job akin to Michael’s factory experience. Michelle had warned us and we had not listened. She had shared that she did not do well at work and had frustrated her boss. Mental illness is fragile and sensitive to pressure, criticism, and rejection.

At home we heroically practiced clearing and wiping tables, sweeping floors, and role-playing customer scenarios. But in the current setting, without a floating aide to provide reminders, without posted charts with tasks to check, and without repeated modeling with guided practice, Michelle’s inadequacies loomed large.

We gave Michelle the choice. She met our eyes with a factual assessment. “I cannot do it. I’m trying my best but my best is not good enough.” Her statement contained no hint of resentment, but rather admirable objectivity. More heroism than futility, Michelle knew it was time to step aside.

Mercifully, that same evening I received a text from my neighbor. This kindhearted Christian woman enjoys my children. Would Michelle be willing to come over and feed my cats while I’m away? I’m going to be out of town for two weeks. I knew that Socks and Oreo would be welcome companions for Michelle.

Michelle and I walked over together. My neighbor had arranged everything for success. She explained and modeled with clear instructions. She had placed measuring scoops in the bin. She showed Michelle how to secure the lid. She set out two separate cat bowls to minimize feline quarreling. She included a spray bottle filled with water and permission to use it if needed. Stephanie had thought of everything. She thanked Michelle with a warm, sincere appreciation. In this remarkable moment, my neighbor had not merely found someone to feed her cats; my neighbor had reclaimed the discarded.

The next day I re-titled our home charts. Michelle has long aspired to be “a notable housewife,” so she is our Notable House Helper. Michael, who once longed to serve as a pastor, is our Right-Hand Man. Both attend to outdoor tasks and indoor chores. Both read the Holy Scriptures in quiet time set aside. Michael plays simplified hymns on the piano while Michelle sings along. Michael attends to geometry lessons with careful diligence. In the evenings we play a family game to firm our minds and share each other’s company. Both children attend church with us on Sundays, sing hymns, and pray for others. To the world it may look like they “do nothing,” but we are not the world.

In the foreword to Simply Classical: A Beautiful Education for Any Child, Dr. Gene Edward Veith writes these words that surprised me at the time. I understand more fully now:

Michael and Michelle are the two heroes of this book. They are twins, and they both have had to struggle all their lives with profound mental, emotional, developmental, and physical difficulties. But as we read this book and follow their education, we see them wake up to the joy of language, the satisfaction they find in beauty, and their academic achievements…. We come to know them as human beings.

In our Christian homes, classrooms, and schools let us love the human beings who need us. Let us bring purpose, belonging, and dignity to the discarded, that the love of Christ may abound in our circles.