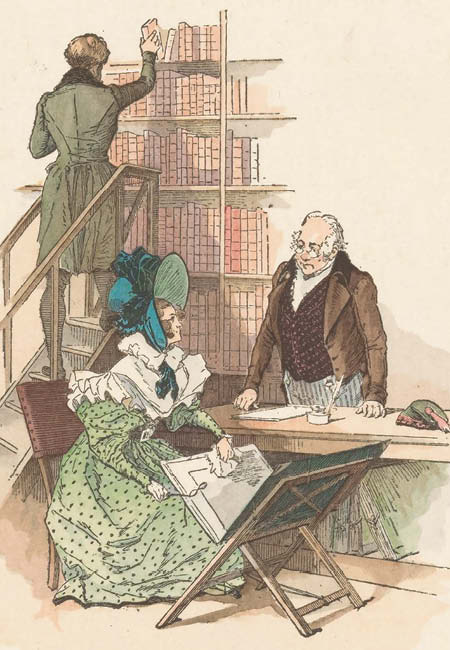 I have always loved to read. I have always loved the sense of entering a completely new world, yet finding points of contact with my own. I have always felt the relentless pull of whatever might be on the next page of a book. I have often lived through my imagination. And I have always been somewhat shy and introverted, so reading has offered a safe haven where, in solitary times, I could find an endlessly varied occupation

In the early seventies, when I was in my teens, I became part of a large group of young people who made open commitments to Christ in a sort of evangelical context. My sub-group was, of course, the readers. We didn’t stop with the Bible. We read books about the Bible; we read apologetics; we read books on theology and church history and spirituality. When I entered college, I chose religion as my major because no profession held any attraction for me compared with the issues my friends and I had been probing for the previous several years.

My college years were decisive for me. My faith matured, joining itself to the Orthodox faith into which I had been born and baptized and intermittently nurtured, and which I had never really left. The process had begun before college, when I began reading the works of C. S. Lewis at sixteen or seventeen. His extraordinary writing—its beauty, clarity, and penetrating descriptive accuracy, especially regarding emotion and the spiritual life—not only confirmed the fundamental truths taught by the church, but connected these truths to a much wider spectrum of experience: mythology, philosophy, literature, even cultural criticism. Rigorously honest, self-effacing, and unpretentious, his portrait of the experience of joy—”the inconsolable longing”—permanently and globally shaped my perceptions and priorities. Shortly after encountering Lewis, I read The Holy Fire by Robert Payne, a book filled with vibrant sketches of John Chrysostom, Gregory of Nyssa, Basil the Great, Gregory of Nazianzus, John of Damascus, and others—a roll call of saints whose work and words molded Christendom.

I also encountered what to me were the incredibly winsome works of such contemporary Orthodox theologians as Alexander Schmemann, John Meyendorff, Lev Gillet, Thomas Hopko, and Kallistos Ware. The immensely powerful literary (yet in a sense catechetical) works of Dostoevsky followed not long after. It was an awesome and pivotal time, a time of intellectual ferment and exchange. One friend, a doctoral student in literature at Columbia, introduced us to the Victorians and Romantics. Another, pursuing New Testament studies at Duke, incarnated the conviction—later so important to me—that academic studies need to mirror reality by being interdisciplinary.

My friendships continued to revolve around books. Books formed the center of our social life. We read books together; we discussed ideas; we joked about and argued and pondered things we read. Sometimes, just for fun, we would muse over what the perfect bookstore would have on its shelves.

Meanwhile, the other half of my life was family and work. I grew up in a family business within an ethnic immigrant Lebanese community, and from the time I was nine years old I worked in my father’s grocery store, as did my older brother, my mother, and my two sisters. There I learned hard, dirty, sweaty, honest work: good work, neat work. Through high school and college and even into my early married life I continued working for my father and with my family. I loved them and was reasonably content to have the two discrete halves of my life going on simultaneously. I worked hard because I had been taught to, and I read and probed and discovered new and delightful things about my faith because I loved the pursuit. Work and that deeper sense of delight remained in entirely separate spheres. And I could live with that. As I said, I was reasonably happy.

On May 17, 1987, my wife Barbara, on her way home from work, was hit by a drunk driver who ran a red light. Some two months later, injuries from that accident took her life and the life of our unborn third child. 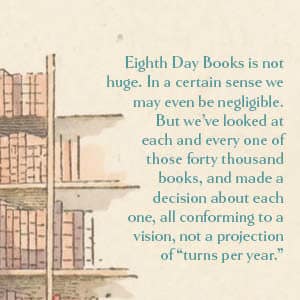 I felt that my life had also ended, and that I had to start over. For a number of months I had no idea what to do. When I began to recover from the numbness that goes with grief, I started to ask myself obvious questions. What kind of job could I look forward to going to every day? What kind of work would involve the tendencies, loves, talents, and gifts that were part of my particular makeup? The thing I could look forward to was opening a bookstore.

The old circle of friends and the tossing around of ideas about what the ideal bookstore would contain came into play. As I drew on those discussions, the advice of my friends both past and present, my experience in the evangelical world, my studies in college in the humanities and in literature, my exposure to church history and the fathers, my deepening convictions about the fullness of the Orthodox faith, my growing sense that all things good and true and excellent and beautiful belonged together—the essential elements of Eighth Day Books—converged.

There came a time when I knew that I could not not do this thing. Whether or not I sold a single book, I knew that this was the thing that I had to do.

The two discrete halves of my life seemed to coalesce. All the seemingly separate and distinct strands intertwined. Life began to make sense.

The journey has not been an uninterrupted rapture. Far from it. There are days of chaotic frustration, confusion, overwhelming insufficiency or mind-numbing paperwork (each of those thousands of books has a paper trail). Finances are always an adventure tinged with terror. But there are also days pervaded by a sense of golden wholeness and completion, days of almost heartbreaking beauty. You continue.

Our building is one of those early twentieth-century quasi-Victorian houses that abound in certain parts of Wichita, in a neighborhood that turned commercial in the 1960s. Our books occupy two levels plus a basement—euphemistically called “the hobbit hole” and devoted to children’s books—and an attic converted into an office full of odd angles, with a view of trees and the old neighborhood. This attic is where I live about seventy hours a week. We stock around fifteen hundred titles, or forty thousand books, compared to the estimated one hundred fifty to two hundred thousand books in the average Barnes & Noble.

Eighth Day Books is not huge. In a certain sense we may even be negligible. But we’ve looked at each and every one of those forty thousand books, and made a decision about each one, all conforming to a vision, not a projection of “turns per year.”

Our mail-order catalog includes these words:

We hope there is a coherence within this eccentric community of books, an organizing principle of selection: if a book—be it literary, scientific, historical, or theological—sheds light on ultimate questions in an excellent way, then it’s a worthy candidate for inclusion in this catalog. Reality doesn’t divide itself into “religious” or “literary” or “secular” spheres, so we don’t either; we’re convinced that all truths are related, and every truth, if we pay attention rightly, directs our gaze toward God. One of our customers found us “eclectic but orthodox.” We like that. We also resonate with Saint Justin Martyr in his Second Apology (paraphrased a bit): That which is true is ours.

Christ’s resurrection is the lodestone of my life, my hope, my faith. And the early church had a rich symbolism for this: The resurrection took place on the first day of the week, which was also the day after the seventh day—the eighth day. This Sunday of all Sundays represents a new creation, eternity breaking into time. The eighth day represents eternity contrasted with the time of this world.

Our vision is all about the unbreakable connections between all things that are true and good and beautiful. In the simplest of terms, Eighth Day Books specializes in classics in religion, literature, and history. These criteria are surprisingly spacious. We try to stock that which is of perennial, not ephemeral, interest. A wise theologian friend told me thirty years ago in answer to my anguished adolescent query about whether to engage “non-Christian books” that if we lay all the cards on the table, the truth will make itself known. His answer has become one of the foundations of title selection at the store.

We believe that overarching principles have to manifest themselves in messy particulars. If indeed, as Paul Evdokimov writes, “no form of life or culture escapes the universal reach of the Incarnation,” then we must stock Saint Athanasius’ On the Incarnation and Curious George, Belloc’s The Path to Rome and Kerouac’s On the Road. That’s how C. S. Lewis and Friedrich Nietzsche, Metropolitan Philaret of Moscow and Oswald Chambers, Bertrand Russell and Frederick Copleston, Martin Luther and Robert Bellarmine, James Whitcomb Riley and T. S. Eliot, Michael Novak and Wendell Berry, Camille Paglia and Lucy Maud Montgomery—the antinomies can be multiplied endlessly—all find common space on our shelves.

We opened in September 1988 in about fifteen hundred square feet, with a few lovingly chosen books, staffed by the owner and one part-time employee, a friend and New Testament scholar who has since made his mark internationally. He was the first in an unforgettable series of friends who came to work at the store, and of strangers who became friends and even family. I consider the staffers brothers and sisters—or, now that I’m nearing fifty, sons and daughters.

They came not just because they wanted jobs, but because they wanted to work at a place like Eighth Day Books, and their terms here have mostly been long because they knew the scent of the place, identified with its vision, and added their sweat to the pursuit of that vision. We have dwelled together and formed one another. I have witnessed remarkable convergences of lives and friendships and whole communities. There have been a few who might keep the store going when I pass from the scene. I’ll be interested to see who it is.

Warren Farha is the owner of Eighth Day Books. This article appeared in the Spring 2005 issue of Image Journal.