Many years ago the English writer G. K. Chesterton claimed that the “coming peril” facing civilization was “standardization by a low standard.” Today, almost a century later, Chesterton’s words have something of the mark of prophecy about them. This “dumbing down” is exemplified in America’s woefully beleaguered education system. Standards of literacy and numeracy, to say nothing of standards of morality, are not so much declining as plummeting. 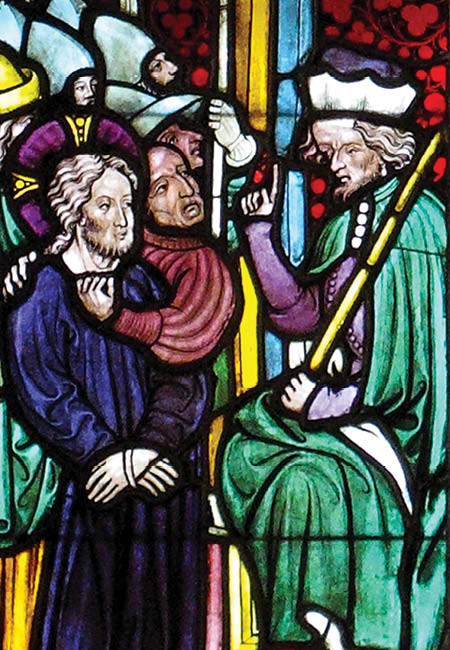 The problem is that the architects of our education system consider Pontius Pilate’s famous question, “Quid est veritas?” to be intrinsically unanswerable. In contradistinction, the mark of an authentic education is the asking of Pilate’s axiomatic question with the aim of seeking an answer to it.

The first step in answering the question, “What is truth?” is to ask the preparatory questions: How do we know what is truth? What are the means necessary to achieve the end?

We discover truth through the use of reason and only through the use of reason. There is no irrational path to truth. The so-called mystical paths to truth, such as the experience of the kiss of beauty or the goodness of love, are merely rational paths by another name, and by any other name reason smells as sweet. The good, the true, and the beautiful are nothing but the triune splendour of truth itself, each of which conforms to, and is an expression of, the rational foundations of reality.

The great pagan philosophers, Socrates, Plato, and Aristotle, arrived at the conviction of the existence of the Divine through the use of reason. The great pagan writers Homer, Aeschylus, Sophocles, and Virgil arrived at the same conclusion through the rational observation of the follies, foibles, virtues, and vices of humanity and their respective consequences. These great pagans came to an understanding of the natural law through the rational observation of humanity’s place within nature, and saw it as a logical and ultimately theological expression of the Divine law.

Although reason leads us to an acceptance of the existence of the Divine, and also to a rudimentary understanding of the Divine attributes of omnipotence, omniscience, omnipresence, justice, goodness, beauty, truth, and love, it cannot tell us much more. In order for our reason to grasp the reality of the Divine on any deeper level, it needs the Divine to reveal itself.

Pilate’s question is answered by Christ in the latter’s assertion (to His disciples) that He is “the way, the truth, and the life.” In this revelation of Himself, God shows us that He is not only the Truth but the Reason. He is, furthermore, not only reason as a noun but reason as a verb. He is the reason Who is the end of our quest for truth, and He is also the rational means, the Way, by which the reason is discovered. In this sense, He is not only the Word but both senses of the word! In an apparent tautology that contains the totality of truth, He shows us that we have to reason to believe the reason to believe.

Having asked and answered Pilate’s question, thereby establishing the truth to which an authentic education should be directed, the other question that needs to be asked and answered concerns who we are as human beings: Who is Man?

For the Christian, in contradistinction to the materialist, man is not simply homo sapiens. He is not simply the most intelligent of the primates. He is a creature made in the image of God in a manner that distinguishes him radically from the rest of the animals. A better name for man is that given to him by the Greeks, who called man anthropos. It is a word which, according to Plato in his Cratylus, implies that man alone among animals reflects or turns upwards. Unlike the other animals that, governed by instinct, are unable to do so, man looks up at the heavens, seeking a purpose and meaning to life beyond the mere creature comforts of everyday life. Reminding ourselves of Oscar Wilde’s epigram, “We are all in the gutter, but some of us are looking at the stars,” we might view the gutter as the symbol of natural instinct and the stars as the symbol of supernatural desire. Man looks up; the lesser creatures do not. Man gazes; the animal grazes!

What we see reflected back to us in the magic mirror of the heavens is not homo sapiens—who is ultimately as enslaved by instinct as are the rest of the animals—but anthropos who seeks solace in the sun and the stars, seeing in the heavenly bodies and the music of the spheres the signifiers of the light of grace. It is in this way that Samwise Gamgee in The Lord of the Rings speaks for all of humanity when he affirms in the darkest hour that “above all shadows rides the sun.”

Another understanding of man, related to the Greek anthropos, is that of homo viator, the traveling man, or the man on the journey of life, the man whose purpose is to get Home by taking the adventure that life throws at him. The archetypal homo viator in Western culture is perhaps Odysseus, but in Christian terms the archetype is the medieval character Everyman, who is travelling on the road to heaven. For the Christian, every man is homo viator, whose sole purpose (and soul’s purpose) is to travel through the adventure of life with the goal of getting to heaven, his ultimate and only true Home, facing many perils and temptations along the way.

The enemy of homo viator is homo superbus (“proud man”), who refuses the self-sacrifice that the adventure of life demands and seeks to build a home for himself within his “self.” Such a man becomes addicted to the sins that bind him, shriveling and shrinking to the pathetic size of his Gollumized self. The drama of life revolves around this battle within each of us between the homo viator we are called to be and the homo superbus we are tempted to become. This drama is mirrored in the perennial personal struggle in the heart of every man between selflessness (love) and selfishness (pride).

Who is Man? Ultimately He is Jesus Christ, the Perfect Man who shows us who we are meant to be. In becoming more like Christ we are ipso facto becoming more fully human.

Who is Man? The answer was given unwittingly by Pontius Pilate as he showed the scourged Christ to the people. Ecce Homo. Behold, Man!

In a nutshell, therefore, an authentic education is that which teaches us that truth is real and is present most fully in the Real Presence of Christ in the cosmos, and, following logically and theologically from this Reality, it is an education that teaches us to be more fully human, more fully the person we are meant to be, by becoming more like Christ who is the Way, the Truth, and the Life.