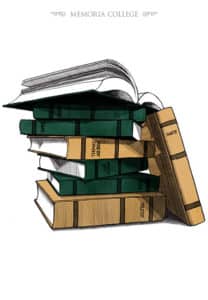 The flood of hot topics that comes through our innumerable feeds has a way of trapping us in a whirlpool of endless scrolling. We read the same sentiments over and over again, since there are, after all, only so many things to say about a celebrity’s shallow comments on a shallow subject at a shallow event last night. Maybe one clever commentator manages a particularly clever play on words that sarcastically gets to the heart of why the remark was no good, very bad, extremely dumb. Our thumbs are quick to punch in a cry-laughing emoji. We didn’t, of course, actually laugh. Our impassive, screen-illumined face didn’t give a single hint of joy as we sit slouched in bed. And we move on to the next thing that we absolutely must have an opinion about but which we won’t remember tomorrow.

How do we navigate our way out of this trap? We can steal a little wisdom from C. S. Lewis, who wrote about the importance of old books in a generation far less hooked on screens than ours. Our peril is greater, but his way out remains just as good. In his introduction to a (then) new translation of On the Incarnation by the fourth-century Church Father Athanasius, Lewis puts forward an extremely short but potent argument for reading old books.

In the first place, Lewis points out that the old wisdom is really not as hard to understand as people assume. They stick to “an exclusive contemporary diet” because they think that these ideas are easy while the old classics will be too hard for them. I encounter this humility frequently in students who are thinking about taking classes with Memoria College. They think they need an introductory book before they dive right in to Plato. In reality, they are usually much more intelligent and prepared for the greats than they give themselves credit for. Or they think they might discuss contemporary politics with more ease than the metaphysics of St. Thomas Aquinas. In reality, most contemporary issues are extremely complex—despite the shallowness and simplicity of our commentators—and a wise opinion on any of these issues requires an extensive knowledge of history, ethics, metaphysics, theology, foreign policy, and economics.

By contrast, the perennial questions that we find in the canon of the Great Books are common to our human experience. While some questions may never have a final answer, if they are asked by Homer and Plato, Dante and St. Thomas, you will invariably find that your own experience will make the canon approachable and your own life will profit from the asking.

In the second place, the debate in every historical period is conducted against the backdrop of a host of unstated assumptions that the disputants share. “All contemporary writers share to some extent the contemporary outlook,” said Lewis, even those like himself “who seem most opposed to it.” But this is not unique to the present age. Every age has its zeitgeist, and the sides caught up in the temper of the age usually tacitly agree on far more assumptions than explicit points of disagreement. We may think of the way the Whigs and Tories during the time of the American Revolution both shared a great number of values, premises, and sentiments because they both came from the perspective of Englishmen in the age of the Enlightenment. Or we may think of the way the intense dispute between Catholics and Protestants

during the Reformation only makes sense within the context of Christianity. In our own case, Team Red and Team Blue can only have the fights that they have within the context of American, modern, liberal democracy. But you won’t see the tacit assumptions—assumptions without which the fight between Team Red and Team Blue fails to make any sense—if you only listen to Fox and CNN. You’ll need to read John Locke’s Second Treatise, or better yet Plato’s Laws and Aristotle’s Politics. This means that the literature of every age comes with the danger of its own particular blind spots. Every age is “specially good at seeing certain truths and specially liable to make certain mistakes.” The trouble with our own age

is that we, being steeped in it, are blind to its blind spots. The blind spots of Greece or Rome or Renaissance Italy, on the other hand, are glaring to us and unlikely to become temptations. Sometimes one finds a troubling tendency in classical education circles to unquestioningly elevate all that is premodern and unquestioningly denigrate all that is modern. This is not Lewis’ point. The ancients and medievals had their brutal wars, their Simonism, and their slaves. But we can see these problems. They practically jump off the page and horrify us (so long as we don’t conveniently clip them out of our textbooks). Lewis’ point is not that they have no faults but that we need their help to see our own. We reel in disgust when we read about what the Romans did to prisoners of war in the Colosseum. What elements of the contemporary zeitgeist—what elements of your own life—would a Roman similarly reel from in disgust? You need to read Cicero to find out.

I have frequently encountered students who hear this argument and immediately think, “Oh yes, I know just what Lewis means. I can see clearly several blind spots of the present age,” as they proceed to rattle off the cliché caricatures of what’s wrong with the other side, whoever the other side might be. They have little sense that any blind spot that they themselves can see clearly is probably not the kind of endemic blind spot that Lewis means. If we can only see what’s wrong with someone else’s worldview, but cannot see what we have in common—what would shock and appall the inhabitants of any other age in human history about us both—then we have yet to gain the perspective that Lewis advocates.

But this leaves one asking, “How can I start to see that which, by definition, is very difficult for someone like me to see? How can I become wise to follies that I and all in my generation share?” The only answer is to find a vantage point outside our own generation so we can see ourselves and our culture more clearly. Lewis tells us:

None of us can fully escape this blindness, but we shall certainly increase it, and weaken our guard against it, if we read only modern books. Where they are true they will give us truths which we half knew already. Where they are false they will aggravate the error with which we are already dangerously ill. The only palliative is to keep the clean sea breeze of the centuries blowing through our minds, and this can be done only by reading old books.

If you know you need to read these books for yourself, consider an alternative to doomscrolling; dig in to something deep.