Philosophy is a deep subject that can be quite intimidating. Modern philosophy is so esoteric that few can understand or relate to it, but classical philosophy is different.

As with so many things, if you go back to the beginning and learn first principles, you can develop a deep and satisfying understanding of a subject that is baffling in its modern form.

While philosophy may seem abstract and unrelated to the real world, quite the opposite is true. In fact, we are all philosophers; we all have a view of reality, a worldview, as we say today. And our philosophy trickles down and affects everything we believe and do. An example is our view of science and religion.

In the beginning, there was no separation between scientists and philosophers because both were asking the same questions: How do we know what we know? Do our five senses give us accurate information about the world, or are our senses unreliable and our knowledge only an illusion? Is anything permanent in this changing world, and if not, why even study it? Are we discreet unrelated beings, or are we all really subsumed in the one? What is more real, the material or immaterial, permanence or change, the senses or the intellect, the one or the many? Are there any principles that underlie the staggering variety of the physical world? The early Greek philosophers asked all of these questions, trying to make sense of their world. 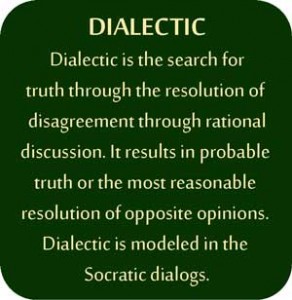 Why did the Greeks insist on these first principles? That’s what the Greeks did: They had the gift of intensely rational minds that looked at everything through reason alone. In the providence of God, they laid the foundation for human wisdom.

Classical metaphysics began with Plato and Aristotle, and was expanded and perfected by the Christian philosophers, Augustine and Aquinas. Classical metaphysics, even without the light of divine revelation, supports the existence of God, the supernatural, the immortality of the soul, monotheism, natural law, traditional morality, and ethics. 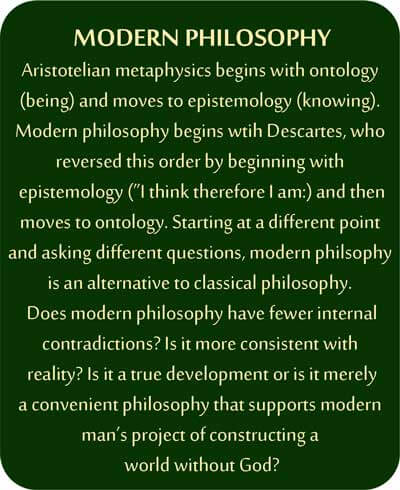 Classical metaphysics, as far as it goes, is consistent with revelation. Reason alone, of course, could not arrive at the doctrine of the Trinity and other supernatural truths of our Christian faith. These can only be known by direct revelation from God.

Classical metaphysics is the foundation of Western civilization. It is rational, systematic, internally consistent, and it can be defended by dialectic. It has never been disproven, just dismissed because it is inconvenient to the modern project of human progress through science alone. Or even worse, classical metaphysics has been distorted and exploited by modern philosophers such as Nietzsche and Ayn Rand.

The importance of philosophy is illustrated by the phony war between religion and science, phony because it is really a war between two philosophies, the classical metaphysics of Plato, Aristotle, Augustine, and Aquinas, and the modern philosophy of materialism and atheism. But we can cut to the heart of this war by using a fundamental principle of classical metaphysics, articulated by Aristotle:

Modern philosophy is based on unexamined assumptions of materialism and atheism, principles which are assumed by modernists as axioms. Materialism says that the material world is all there is, an assumption that is clearly falsified by the existence of the mind. Even though materialism cannot be defended by dialectic, it has become the religion of our time. It provides the framework within which questions can be asked and answered, and thus serves as an orthodoxy as narrow and superstitious as any religion has ever been.

We can change that by studying classical metaphysics, which teaches us the first principles of philosophy with which we can expose the prodigious errors of modernism.

Reading Assignment: The Last Days of Socrates by Plato