Saint Augustine in his Confessions tells us that after many years of wandering in the desert of indecision, it was Cicero who led him to Christ. Cicero’s Hortensius set him on the path to Christian conversion by implanting in him a longing for the immortality of wisdom. The text of Hortensius did not make it to the modern world and thus is probably the most famous lost treatise in world literature. Wouldn’t we all love to read this work that St. Augustine praises so highly? Well, I have read a lot of Cicero and, like most writers, he repeats himself a lot, so I can assure you that if you read Cicero, you too can read many of the same thoughts that so inspired St. Augustine.

As believers, we give our children the answers before they have the questions, which is only natural and good. We have the answers that God gave us in His Word. However, the answers make more sense and are learned better if we ask the questions first and really want to know the answers. This is what young people do when they reach high school and college and start to ask questions about their faith and the values we have tried so hard to instill in them. But as parents, we worry about our children asking questions and experimenting with the wrong answers, as St. Augustine did for so many years. Wouldn’t it be great if there were a way to ask fundamental questions about life and explore answers in an orderly, safe academic setting? There is: the pagan classics.

Let me give you an example.  In Cicero’s work On the Nature of the Gods, Cicero lets the Epicurean Velleius expound on his philosophy at length.  Here are some of the brilliant ideas espoused by the Epicureans: 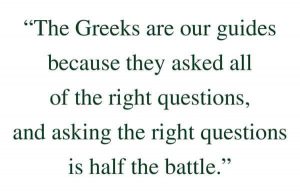 Sound familiar? Notice that the Epicureans, unlike modern atheists, were not impious enough to suggest the gods did not exist, only that they were irrelevant. And to give them credit, they did get one thing right—the world is made of atoms. The Epicureans even anticipated multiple universes when they suggested that there are multiple worlds that come into and out of existence.

But then Cicero devotes page after page to rebutting, ridiculing, and generally showing, through reason, the shallowness of the Epicurean worldview. What a great benefit to the young to read about this philosophy and see that the trendy, chic ideas of our celebrity atheists—Daniel Dennett, the late Christopher Hitchens, Richard Dawkins, and company—are not new, but rather old, recycled, unoriginal, and wrong, already rebutted, ridiculed, and dismissed by the giants of the human intellect. Let Cicero, Plato, and Aristotle do the work for you. When it comes to the existence of God and the immortality of the soul, they are on our side. Human wisdom can be used as a defense of divine revelation, for it is all God’s wisdom.

We are all Greeks when we come to God: searching, asking, debating, questioning, doubting, wondering. The Greeks are our guides because they asked all of the right questions, and asking the right questions is half the battle. And they explored answers with a depth and insight that is astounding. It was Cicero, building on this Greek inheritance, that led Saint Augustine to Christ. It was Vergil, who used Homer as his model, that led Dante up to the gates of Heaven.

The pagan classics can do the same for us.

Reading Assignment: On the Nature of the Gods by Cicero