In the last two issues of the Classical Teacher, I gave several reasons why Christians should read the pagans. I talked about their contributions to architecture and discussed what they knew about virtue from the natural world which God created. These were some of the more obvious reasons. But there is another reason that is also obvious, although we seem to miss it: their view of science.

Because we live in the aftermath of what has been called the “scientific revolution,” we modern people consider ourselves quite superior to the ancients in regard to the study of the natural world. We are polished practitioners of what C.S. Lewis called “chronological snobbery.” We think ancient people were ignorant of the natural world and that we, with all our advanced scientific knowledge, have little to learn from them.

But one of the problems with having your nose so high in the air is that you can miss the thing right in front of you. 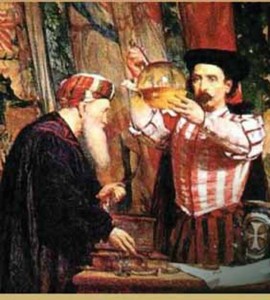 Science, as we use the term today, is the study of matter. But the abstract investigation of the natural world began with philosophy,  for the ancients had to get first principles settled first before science could really get off the ground.  The Greeks were always looking for first principles. What is the unity behind the diversity of life? What is the fundamental reality—change or permanence, the material or immaterial, the one or the many?

Thales, an ancient thinker who we could consider the first scientist, thought that everything was made of water.  Pythagoras thought number is what unified all things. Heraclitus said that all is flux. Parmenides believed the senses are wrong, that change is an illusion. What is the true source of knowledge—the senses or the intellect? Empedocles said that matter was composed of earth, fire, air, and water; and Democritus that matter was composed of small indivisible particles called “atoms.”

Later philosophers, like Plato and Aristotle, began to clean things up and to establish “first principles” by which we could better think about these issues.  While it is true that science has advanced far beyond the initial beginnings of the ancient Greeks, these thinkers laid the foundation for that progress.

“The first principles proper to a science cannot be demonstrated within that science.  If they could, they would not be genuine first principles.  They can, however, be defended by dialectic.”  In other words, science does not justify itself. There are assumptions it employs but that it cannot prove. Science rests on something more fundamental than science.

Remember how geometry works.  You start with axioms (postulates) which you cannot prove.  Axios in Greek means “worthy.” Axioms are worthy of belief because all reasonable people accept them and they can be defended by dialectic.  Dialectic was the question and answer method used by Plato to test one claim against another to see how worthy it really was. These axioms cannot be justified by geometry; they are prior to it. They can only be “proven” by some process of dialectic outside of geometry itself. Once your first principles—your axioms—are established, you can build your whole edifice of geometry which, because it accurately describes the natural world, confirms that your original axioms were true.

It was Euclid, an ancient Greek, who developed this method, and his geometry is still the model for mathematical and scientific reasoning. And just like the axioms of geometry, the assumptions of science must be proven outside of science itself. They are first principles which science itself cannot establish. They must be established by philosophy—or theology.

Over the last several hundred years, modern thinkers have abandoned many of the first principles of classical thought.

Aristotle’s famous “four causes” are the four questions that can be asked about anything.

Modern science has thrown out two of Aristotle’s four causes—the formal and the final cause, with earth shattering results. Many of our debates today­—about political philosophy, ethics, and the nature of reality itself are determined by whether or not you think things have real essences (formal cause) and whether they have intrinsic purposes (final cause). They were never disproven; they simply went out of intellectual fashion.

Is there such as thing as “human nature”? Should we treat animals the same way we treat humans? Are men and women really different? All of these questions depend on one’s belief in formal and final causation.

The most obvious result of this difference between the classical and modern view is the whole false battle between science and religion.  We could cut right through if we demanded that modern science establish its first principles through dialectic. And we could do that if we knew how, which we could learn from Plato and Aristotle.   We can and must go back to the Greek first principles of science if our civilization and even science itself is to survive.

Your reading assignment for now:  Martin Cothran’s Material Logic. I will get you to the original classics. I am just giving you a break for now.  Aristotle is not that easy to read.