Modern educators love to talk about “critical thinking skills,” but not one in a hundred even knows what he means by the term.

Every time our country goes through an education reform spasm—which it has undergone about every twenty-five years since the 1920s—the education establishment trots out a set of slogans that always sounds good but doesn’t really mean anything. Even words that were very meaningful in other contexts become mind-numbing under the deadening hand of education reform.

The newest victim of this treatment is the term “critical thinking skills.” Undoubtedly at some point in the past, this term meant something, but today it has been hijacked by proponents of what is called “twenty-first-century learning,” the most recent incarnation of education reform.

When those promoting education reform invoke the term “critical thinking skills,” you can count on one thing: They have no idea what they mean by the words.

Last fall, I participated in a televised debate on the new national science standards being implemented in my home state of Kentucky. I pointed out that the standards did nothing to encourage the acquisition of a knowledge of nature.

There is, on the one hand, a pronounced tendency to downplay basic factual knowledge—particularly if such knowledge is gained through that process which is the bane of progressive educators: memorization. You can see this pretty plainly in the rhetoric surrounding the Common Core Initiative.

In the science standards, students are never asked to name, identify, classify, or describe any natural object. In fact, the words “mammal,” “fish,” “reptile,” and “amphibian” are never mentioned in the standards—nor are such basic scientific terms as “hormone,” “kinesis,” “lymphatic,” “neuron,” “nucleotide,” “osmosis,” “Celsius,” “Fahrenheit,” “plasma,” “vaccine,” “protozoa,” or “enzyme.”

When I pointed this out during the debate, my two opponents, a college biology professor and the chairman of the State House Education Committee, argued that the reason for excluding these things was that they were trying to teach students “critical thinking skills.”

I said that I doubted whether they even knew what “critical thinking skills” were. And as it turned out, they couldn’t give a definition.

When the moderator of the debate asked me what my definition of critical thinking skills was, I answered: “Logic.”

It is an interesting fact that the people who say they want to improve our schools spend so much time talking about “critical thinking skills” and so little about logic.  One of the reasons is undoubtedly that the word “logic” is much more concrete. It implies a system of rational rules that can be taught—what the ancients called an “art.” Logic has an actual history of having been taught, and taught in a certain way. It is not nearly so amorphous as the term “critical thinking skills.” 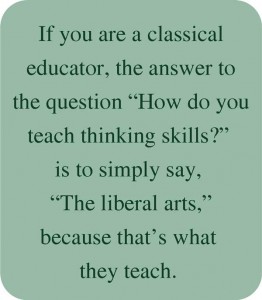 But for propaganda purposes, it is less useful to use exact words. Vague words with indeterminate meanings are much to be preferred.

So bad is this situation that a friend of mine, an emeritus professor of economics, is writing a book in which the thesis is that no one knows what the term means. “Critical thinking skills” is a term used in a number of different disciplines, he points out, but no one has a clue as to what it means.

But it sounds good, which is why education reformers use it. To say you are in favor of critical thinking skills is the education equivalent of saying, “Have a nice day.”

The next time you hear someone from the educational establishment start talking about thinking skills, ask him or her to define it for you. You will be met with blank stares. And if you ask them to give you an example of a thinking skills program they would recommend, they will change the subject.

When the television moderator asked me the question about what thinking skills were, instead of merely mentioning logic, I could just as easily have said the liberal arts (of which logic is a part). The two parts of the liberal arts—the trivium and the quadrivium—are the two kinds of thinking skills: the qualitative and linguistic on the one hand, and the quantitative and mathematical on the other.

Ask yourself this question: If my students are versed in formal grammar—say, they have spent their grammar-school years studying the inflected Latin grammar—and they are at grade level in mathematics, what thinking skills are they missing?

In other words, there is a seven-word answer to the question “How do you define critical thinking skills?”—grammar, logic, rhetoric, arithmetic, geometry, music, and astronomy. And as David Mulroy, the author of The War Against Grammar, points out, if it makes you feel better, you can simply replace astronomy and music with algebra and calculus.

If you are a classical educator, the answer to the question “How do you teach thinking skills?” is as easy as saying, “Latin and math.” If you want to, you can add “music.” Or you simply say, “The liberal arts,” because that’s what they teach.

We can’t teach children thinking skills if we don’t know what they are—and we can’t teach them how to think if they don’t have anything to think about.