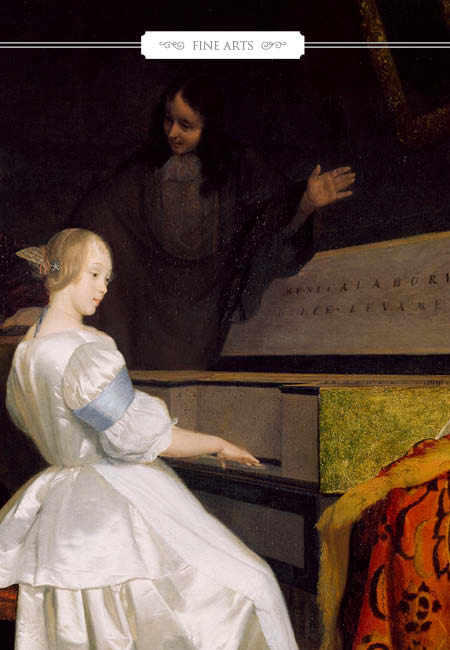 Few people recognize engagement in the arts as an intrinsic element of spiritual virtue. To use the words of Pope John Paul II from his “Letter to Artists,” penned in 1999,

[T]rue art has a close affinity with the world of faith, so that, even in situations where culture and the Church are far apart, art remains a kind of bridge to religious experience.

While Discipline is not included in the list of cardinal virtues enshrined in classical philosophy and Christian theology (Prudence, Justice, Fortitude, and Temperance), the practice of discipline plays an undeniable role in the cultivation of these virtues. Principles of discipline and order are undeniable bedrocks of Western culture. Plato spoke about the “virtue of each thing, whether body or soul, instrument or creature” developing “not by chance but as the result of the order and truth and art which are imparted to them.”

The quality of a child’s life will be shaped by his or her capacity for self-discipline. Not long ago, children routinely learned lessons in self-discipline from exposure to ancient legends and classical myths. Great stories of the Bible (such as Jacob disciplining his emotions to labor for Rachel) shaped societal values. Daily conversations would be peppered with maxims like “A journey of a thousand miles starts with a single step.” Admired figures spoke winsomely about discipline, including the legendary coach Vince Lombardi, who called it “a state of mind you could call ‘character in action.'” Think how far our popular culture has lurched from such insight!

Living in a society where false winds blow the praises of instant gratification and superficial achievement, where can we turn to foster self-discipline in a child? What about a study of the arts, undertaken not only as an acquisition of skills or a search for creative expression, but as a disciplined path that unites us with critical elements of our Western heritage?

Until recent decades, a methodical study of the arts formed a routine part of nearly every child’s education. As recently as my youth, music filled the air of our neighborhood on any given day after school. Perhaps the tinkling of scales on a piano floated through a window, or maybe the blast of a trombone scared off the birds; such musical sounds documented the effort of young people to master the intricacies of an instrument. These same children likely would have absorbed a systematic program in music and art appreciation during the school week, as well as some exposure to dance and theater.

Was the goal to put more virtuoso performers on the stage? Absolutely not. The goal was to establish paths to the cultivation of virtuous qualities like patience, diligence, persistence, and steadfastness. There was a general recognition that the discipline and reward of studying the arts laid the groundwork for whatever avenues the child pursued as an adult, be it academic, technical, or a venture requiring craftsmanship. So let’s consider some examples of how this cultivation looks in practice.

A child who studies an art form must master a roster of impulses early on: the impulse to wiggle or lose focus; the impulse to be weird (“Hmmm, what happens if I hold the recorder with my feet?”); the impulse to slither off or throw a fit when the task gets tricky. The study of any art moves in a methodical process using baseline methods such as “copying the masters.” That is why students of painting set up their easels in galleries and repeatedly copy the masterworks. That too explains the exhausting routine dancers follow daily at the barre underneath the watchful eye of the instructor.

Modeling oneself after something exemplary instills moral, ethical, and spiritual discipline. It supports our growth in the cardinal virtues, mentioned above, as well as the theological virtues of Faith, Hope, and Love. Educators and parents desiring to teach these precepts do not always realize how readily the arts support their efforts, helping a child control the ear, eye, mind, and body, as well as discipline the emotions. Thus, music appears in the ancient structure of learning called the Quadrivium not as an elective, but as a cornerstone. 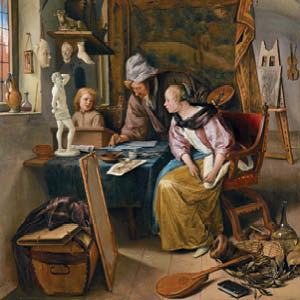 A disciplined exposure to the arts also disproves the unfortunate belief that “creativity” is a free force sweeping us along, with minimal effort, toward a laudable accomplishment. How often have you heard: “My neighbor plays piano so great, and he doesn’t even read music!” Or: “You should see how well my granddaughter draws, and she’s never had the first lesson.” My answer is to counter: “Just think what Neighbor A or Granddaughter B would achieve with some training!” Disciplined pedagogy and the self-disciplined acquisition of artistic skills do not diminish self-expression; rather, they are the best means to attain it.

Today’s children are also fed the drivel that anything they do is “creative” as long as it fulfills a loose definition of self-expression. This naïve notion may apply to toddlers, but once a child hits the age of five or six we must take a disciplined approach to learning the arts. There are fixed principles in every art form—”Turn the brush gradually like this to make this kind of line”—and a good teacher nurtures self-discipline—”I know you’d rather dive in, but let’s first figure out the mix of colors for the results you want.”

Discipline is needed not only to do an art form, but to appreciate it. For example, most children (and adults!) are brought up listening to music that lasts approximately three minutes (or, in the case of snippets from film scores, less). The focus necessary to absorb the non-verbal language of music requires a much longer attention span. The capacity for such aural understanding needs to be developed.

We can look at other art forms and discover these same principles. Dance cannot be appreciated fully until the observer realizes, for example, that a ballerina’s “delicate” feet are muscular weapons, calloused from years of physical pressure, that bleed under the stress of pointe shoes. A child’s understanding of a painting changes when she finds out how many times the artist sketches a face, even when it seems inconsequential—one of dozens in a crowd.

To return to the letter of John Paul II (himself an actor and playwright in youth), the real significance of the arts lies in their link to God: “the Divine Artist passes on to the human artist a spark of His own surpassing wisdom, calling him to share in His creative power.” How differently we would embrace and teach the arts if they were more widely understood as a reflection of the Divine Creation! Administrative discussions of their “extra-curricular” nature would disappear. Instead, the arts would be embraced for their unique power to prepare a child for the challenges of adult life through the strengthening of the most virtuous qualities.