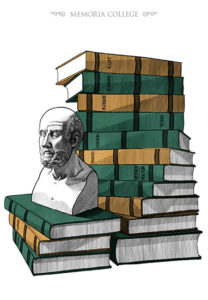 When discussing the heliocentric (sun-centered) view of the universe, the brilliant astronomer Johannes Kepler wrote,

For in the sphere, which is the image of God the Creator and the Archetype of the world … there are three regions, symbols of the three persons of the Holy Trinity—the center, a symbol of the Father; the surface, of the Son; and the intermediate space, of the Holy Ghost.

Why does Kepler make such a statement in a work of science? Because it was a necessary step in developing his theory. He wanted to understand how the planets and stars moved in the heavens, but before he could go into the details, he had to provide the big picture that encapsulated his entire theory. The fact that the heavens represented the nature of their Creator gave him a guiding principle that he could then use to understand the details of how the heavens worked. As a result, he was able to come up with what we now call Kepler’s Laws, which are still considered an accurate description of how the planets move in the solar system.

Where did Kepler get this guiding principle? It wasn’t from a collection of data. It wasn’t from the work of a previous scientist. It was from his imagination. Kepler imagined that God would imprint His very nature into the structure of the universe, and as a result, Kepler was able to revolutionize the way astronomers understood the heavens.

If you take the time to read the great scientists of the past, you will see that their imaginations were critical to their work. Archimedes imagined the surface of each body of water to be the surface of a sphere, because he knew the Earth was a sphere. As a result, he was able to use geometry to derive his Law of the Lever and his principle of buoyancy. Blaise Pascal imagined the atmosphere as a weight that was pushing down on all things it touched. He then described an experiment to his brother-in-law that would determine whether or not he was correct. Because his brother-in-law performed the experiment, we now know that the atmosphere exerts pressure, and we also know that this is true for any fluid, which led engineers to develop the hydraulic lift.

This inclusion of imagination is one reason I find it valuable to read the great scientific works of the past. In those days, scientists weren’t constrained to write their works in a dry, dispassionate style. They wrote honestly about the way they thought, often with poetic language and great enthusiasm. As a result, you can gain insights into how they came up with their revolutionary ideas. In today’s science, imagination is still central to our ability to discover new things. Unfortunately, because of the nature of peer review, funding concerns, and artificially imposed writing formats, we rarely include the imaginative part of our thinking in our scientific papers.

It’s important to realize that this is just as true for the young, budding scientist as it is for the experienced one. Consider, for example, the story of ten-year-old Clara Lazen. In school, she was being taught the basics of how atoms bond to make molecules. In certain molecules (called “covalent” molecules), the atoms share electrons so they each attain a stable state. The shared electrons make a chemical bond, and this kind of bond can be represented using special molecular modeling kits. The kits have balls with different numbers of holes in them. Some of the balls in the kit, for example, have four holes in them. They are generally black, and they represent carbon. When carbon has four bonds, it is stable. Other balls have two holes, and they are typically colored red. These balls represent oxygen, which is stable when it has two bonds. Other balls have three holes, and they represent nitrogen, which is stable when it has three bonds.

The teacher told the students to try to build molecules using their kits. He said that any molecule in which each ball had all its holes filled would represent a stable molecule, because each atom would have a stable arrangement of electrons. This is, of course, an oversimplification, but then again, he was teaching ten-year-olds. Well, Clara started building molecules, and she built something that not only had all the holes filled, but also captured her imagination. She showed it to her teacher, who took a photo of it and sent it to a friend, Dr. Robert W. Zoellner, who is a chemistry professor at Humboldt State University. Dr. Zoellner searched the chemical literature but found no reference to the molecule. As a result, he did his own theoretical analysis of the molecule and decided that it was, indeed, stable. Theoretically, it should be possible to make the molecule.

In the end, Dr. Zoellner published a paper about Clara’s molecule (and other possible molecules in the same class) in the Journal of Computational and Theoretical Chemistry. Clara and her teacher, Kenneth M. Boehr, are co-authors on the paper. It turns out that based on the energetics of the molecule, it could be used in batteries or even explosives. As a result, Dr. Zoellner is trying to find someone to attempt to synthesize the molecule.

This is an illustration of Einstein’s view. Any chemist would tell you that Clara’s teacher oversimplified matters for his students. In addition, Clara didn’t really understand chemical bonds. She hadn’t even been taught Lewis structures or Valence Share Electron Pair Repulsion theory, which together are the basis of the molecular models with which she was playing. However, her imagination was more important than such knowledge, and it opened up a new frontier for molecular energy storage.

As scientists from Johannes Kepler to Clara Lazen demonstrate, the search for knowledge is a creative endeavor. As such, it requires a rich imagination.

Dr. Jay Wile is an award-winning author of science textbooks for all ages, including his "Exploring Creation With…" series, as well as a professor at Memoria College.