These three cultures became so integrated over the course of the last two millennia that they have become hard to distinguish from one another. These three harmonic cultural voices speak to us out of the past and are sometimes hard to disentangle. But we can draw some basic distinctions.

Greek culture was artistic, literary, and philosophical. The Greeks invented representative art, drama, and philosophy as we know it today. The Romans, being less theoretical and more practical, were noted more for their contributions to ordered government, roads, and architecture. The culture of the Hebrews was noted for its posture toward a personal, transcendent God. It was to the Hebrews that God directly revealed Himself, and it was the Hebrews, His own people, with whom He dealt—individually and as a nation.

It was these three cultures which, in the first five centuries after Christ, were taken by the Church Fathers and transformed into a greater thing than the combined parts: Western civilization, which was handed down over the last two thousand years by what we know today as classical Christian education.

The two great values of the Greeks were strength and intelligence, as articulated in their literary tradition. The value of strength is illustrated in the first of Homer’s great works, the Iliad. It is the story of a warrior, Achilles, who values martial strength and personal honor (which is the individual reputation of strength) over all else. It is about his ability to defeat the Trojans in battle, his angry retirement from the conflict when his honor has been challenged, and his return to the battle where, as we know from other accounts, he is killed because of his one weakness. The value of intelligence is personified in the protagonist of Homer’s other great work, the Odyssey. Unlike Achilles, who succeeds due to his physical strength and the strength of his character, Odysseus succeeds through his intelligence. He is “Odysseus of many wiles.” He does not rely on physical strength to defeat his enemies, but rather relies on his intelligence. He outsmarts his foes.

As time went on, the earlier martial culture of the Greeks gave way to the great intellectual culture that grew out of Athens. This transformation is illustrated in Sophocles’ play Ajax, when a meeting of the generals is held after the death of Achilles: They must decide who will receive the armor of their now dead champion. The two nominees are Ajax, the next strongest warrior after Achilles, and Odysseus, known for his subtlety and quickness of mind. The scene represents a symbolic decision point for the Greeks. Will they remain primarily a martial culture, or become known instead for their intellects?

The award is given to Odysseus. And, though the Greeks retained their reputation as great warriors, they did so in large part on account of the strategic and tactical abilities of their great generals—Leonidas, Themistocles, Pyrrhus, Lysander, and, of course, Alexander the Great. They also conquered their foes through military innovations that gave them an advantage over their enemies, such as the phalanx, in which hoplite soldiers stood with their shields locked together and their spears projecting outward toward the onrushing enemy, and the trireme, a ship that gave them greater mobility against their naval enemies.

Alexander embodied in many ways the aspirations of the Greeks. He was a military mastermind who repeatedly crushed armies much larger than his own, he eventually conquered most of the known world, and, although not properly a Greek (he was Macedonian), he was deeply learned in Greek education, having as his tutor none other than Aristotle himself. According to legend, Alexander brought along on his campaigns his copy of Homer, out of which he had memorized long passages, and which he is said to have kept under his pillow while he slept. His campaigns were not just military, but cultural. He brought Greek culture with him like a missionary, and, in the end, it was not the Greek military that conquered the world, but the Greek culture itself, which remained long after he left.

And what is this culture? It is the culture of intellectual curiosity. “Up and down the coast of Asia Minor,” said Edith Hamilton, “St. Paul was mobbed and imprisoned and beaten.” But only in Athens, she points out, did they listen: “They brought him unto the Areopagus, saying, ‘May we know what this new teaching is?'”

There was great art and architecture before the Greeks, but they were the first to attempt to discover and portray the ideal of man. Their literature and their philosophy, however, seem to have come out of nowhere. “With them,” said Hamilton, “something completely new came into the world.” In a matter of two or three generations Aeschylus, Sophocles, and Euripides were writing tragic dramas—and Aristophanes his comedies—that remain unsurpassed even today. And then there was Socrates, who, unlike anyone before him, came asking questions about the True, the Good, and the Beautiful. He interrogated his friends on every issue imaginable—justice, truth, happiness, moral obligation, music, friendship—using his dialectical technique of discussion. His thoughts were written down by his student, Plato, and studied by Plato’s student, Aristotle.

And all of this was done through the use of Greek, a language of unique richness and subtlety, which made the articulation of these ideas understandable and compelling.

The twin values of the Romans were order and piety. The Romans ruled the world for more than a thousand years—longer, if we count the eastern Roman Empire—because of their unsurpassed ability to order both their civilization and their selves (piety is the order of the soul). The savage Roman temperament, which can be seen in Romulus, their first king, is seen no more clearly than in their extravagant and bloodthirsty games and pageants. Such a violent and energetic race of people could not survive without some external means of control, some way to channel their enormous energy into productive purpose. And so they developed the extrinsic cultural means by which they should govern themselves. 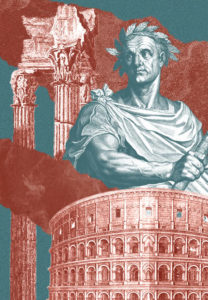 The Romans succeeded because they were more organized than the civilizations around them, and this organizational ability was nowhere more evident than in the device by which they organized themselves: “Rome’s monumental achievement,” said Hamilton, “never effaced from the world, was law.” Law, a thing we take for granted in our still vaguely Roman world, was made supreme, and was taken, as Alexander took Homer, to the rest of the world.

“The little town on the seven hills conquered the other little towns around her,” said Hamilton, “because her citizens could obey orders.” Their ability to militarily conquer and then to maintain a huge empire for so long a time is a testament to their organizational abilities. Their thirst for order extended to everything around them. They built roads and aqueducts that are still being used today. To look upon the Colosseum is to behold the essence of Roman power and order in stone.

This external order was reflected by the inner order of the soul. The Aeneid, the great work of Virgil (the Roman Homer) is the story of Aeneas, the Trojan prince who flees the burning city of Troy with his father on his back and his family in tow. He exemplifies the Roman virtue of piety (the order of the soul) through his devotion to family and practical, everyday ethics.

The Roman language itself betrayed the Roman character. It was the language of order. R. W. Livingstone has said it better than anyone:

The best revelation of the Greek genius is the Greek language, fine, subtle, analytic, capable of feeling and expressing the most delicate minutiae of thought, never hard, and yet not flabby, the most malleable of tongues and equally capable in the hands of a master like Plato, of wit, dialectic, pathos, satire, poetry or eloquence. And can we really understand the spirit of Rome without knowing the march of the Latin sentence, serried, steady, stately, massive, the heavy beat of its long syllables and predominant consonants reflecting the robust, determined, efficient temper of the nation, as different from Greek as a Roman road from a breaking wave.

There was Athens, Rome—and then there was Jerusalem. The Hebrews, too, could be said to have had two values: faith and obedience. Unique among the ancient tribes of the world, the Hebrews believed in one transcendent God, and their entire culture was centered on His worship. There was the one holy God, who had revealed Himself specially and specifically to the Hebrews, whom He called His people.

The entire history of the Hebrews consisted of this one single, supreme, transcendent Deity and His dealings with individuals and with nations, especially the nation of Israel. While the Greeks had Achilles and Odysseus, and the Romans’ Aeneas, the greatest of the Jewish heroes was Abraham, a hero not of warfare nor of the mind, but a hero of faith. 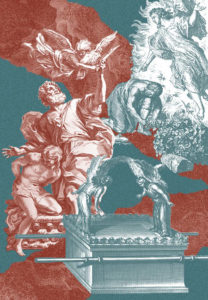 By the time of Christ these three cultures had begun to converge. Alexander had conquered the known world and Rome had expanded it. In the centuries after the death of Christ, Church Fathers in the East and the West worked through the relationship between the direct revelation of God—the Old Testament Scriptures and Jesus’ teachings—and the great truths of the natural order that were discovered by the Greeks and Romans through God’s general revelation. They melded these together into what we now call Western civilization.

All three of these civilizations saw their beliefs as universal, applying to all men everywhere, but by the fifth century in the West the Christian Roman Empire had become universal in fact. And so it remains, even in our modern world where, despite ever-present attempts to change them, all Western nations still share the central assumptions of the three cultures.

It is only through the work of centuries of faithful educators that we today benefit from this great tradition. And it is only through our own ongoing commitment to continue this work that it will survive.