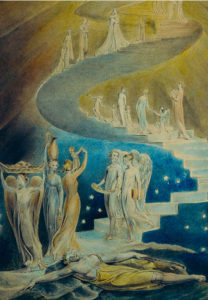 If we seek to conserve the Western tradition, then what are the principles that constitute it? There is a recognizable tradition of Western civilization in which we all participate, one governed by the concept of beauty. Let us consider six key insights about the nature of the cosmos and of the human person that constitute the genius of the West that we should all desire to share in, to conserve, and to cultivate. These insights are to be found already present in the culture of ancient Greece at the time of Socrates, and they are also to be found in the Judaic tradition prior to its contact with Hellenic culture. But they find fuller and more satisfactory articulation just before and during the first Christian centuries, as the thought of Athens and Jerusalem engage one another. Socrates himself can be understood as a representative figure within a synthetic but readily unified tradition that no less profoundly depends on Jewish and Christian thought.

The first insight is that man is an intellectual animal. This is not strictly identical with claiming he is rational. First of all, “intellect,” in the Christian-Platonist tradition, means the faculty of thought itself. Aristotle’s understanding of God is of a thought that “thinks itself.” Many centuries later, Thomas Aquinas would explain that this claim does not indicate that God thinks only about Himself to the exclusion of all else, but that He is His Thought, comprising the knowledge of all things in a single, simple essence. What absolutely characterizes the human being as intellectual is not his distinct way of solving problems, but the essential openness to being, the capacity to drink in the whole of reality, becoming it virtually without ceasing to be himself, afforded by the spiritual operation of thought. Our intellect impresses not primarily in its orderly processing of data, but in the “limitless voracity” by which it “seizes being and draws it into itself.” The mind can potentially contain the universe; it can possess the fullness of being and of truth.

Second, reason finds in its very operation a truth beyond itself that defines the human person. Namely, that his nature is founded on a prior or foundational intelligibility in the world and that he is intellectually and aesthetically oriented toward a transcendent knowledge of it. We can demonstrate truths by our reason’s use of logic, but the principles that make reasoning possible cannot themselves be demonstrated. Something precedes man’s act of knowing, both in himself and in the world. Aristotle speaks of the intellectual virtue whereby the mind “grasps the first principles” of thought. The most ancient authorities in the tradition emphasize that prior to our reasoning lies some kind of gift, visitation, or inspiration. For Plato, every idea is a recollection (anamnesis) from the plane of eternal ideas, or pure intelligibles—what are commonly called the “Forms.” Centuries later, Augustine would stretch into the darkness of memory to find the presence of God—the one who makes the memory to be in the first place and who abides there as in all things. When we look out at the world we discover the intelligibility of reality itself; thought is only possible because idea—truth—was there first, already waiting to be thought. That we can know things—that we can readily know that they are and what they are—tells us something about the objective intelligibility that precedes our knowing and greets us at every turn.

But this ready comprehension that things are and of what they are provokes us to strain and exceed ourselves in trying to understand what it is To Be—or to glimpse something even beyond that. But what is this supernatural end? The tradition proposes a third thing: This dual orientation proceeds by way of reason towards an intellectual vision perceptive of Beauty Itself, which is the splendor of truth. The world would not be reasonable if it did not act “for a purpose.” We find the world soaking in intelligible truths and desirable goods; we find purposive action everywhere. And so, the proper question is not whether there is a final cause, a highest good at which all things aim, but rather what is that good. Because of the mind’s universal capacity, we know that whatever it may be, we may come to understand it. We see in the Symposium that Socrates believes the name for this good at which our nature aims is Beauty. Plotinus will write, centuries later, that the soul’s course lies in “the vision of the First Beauty itself.”

When we arrive, by way of discursive reason, at the final knowledge, the highest good of the intellect, and come to possess it, the tradition tells us we do not know it any longer in terms of discourse but in the form of intellectual vision. Augustine, with most of the Christian-Platonist tradition, considers the seeing of truth as the soul’s vision of Beauty. We speak truths as truths, but when truth presents itself to the mind’s eye, it does so as Beauty. In such vision, we encounter truth as more than a series of particular propositions; we see it whole, with all its multifarious aspects joined into a seamless whole, every part overflowing into every other like, again in Plato’s words, a vast sea. Nearly one thousand years later, Thomas Aquinas will accept it as a matter of course, speaking consistently of true knowledge as vision, of rational truth as spiritual light, of divine revelation as the “light of glory,” and of the divine knowledge as akin to a single glance over all eternity. Beauty in its purest sense designates a finality at which the human intellect arrives when it fulfills itself, when it is most fully saturated in reality. 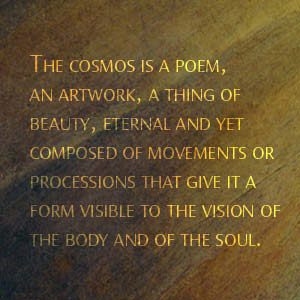 Human beings are by their nature ordered to this vision of beauty, and the intelligibility of the world around us is not the least of evidences in favor of that proposition. This should suggest to us that beauty is not exclusively or even primarily a human “value,” but that the world is itself ordered by and to Beauty. This is the fourth insight. Nature must be understood in terms of well-ordered desires, that is to say, movement ordained to an intelligible end, which is, in turn, to say, form (being constituted in itself by a purpose beyond itself) ordered to splendor. The cosmos is a poem, an artwork, a thing of beauty, eternal and yet composed of movements or processions that give it a form visible to the vision of the body and of the soul.

In a similar vein, the Wisdom of Solomon will praise the creative knowledge of God for having “arranged all things by measure and number and weight,” that is, for endowing creation with the mathematical qualities of beauty. Later, it will take on new life, finding more complete expression in the prologue to John’s Gospel, where the eternal Logos, the well-measured and ordered thought of God, creates everything from nothing.

Medieval writers will embrace these concepts with alacrity, finding the geometrical and numeric structures that saturate the material world, the cosmos, as but signs of its origin in Beauty Itself and its orderly journey back to it. This rich perception would find its greatest single advocate and most sustained explication in Dionysius the Areopagite, whose Divine Names holds that the universe is mapped as a great pageant begun in the divine Beauty of God, proceeding out into the precincts of creation, and returning once more to Him.

Aquinas writes that man’s vision of the Divine Beauty leads, finally, to his assimilation to it. This leads us to the fifth insight: Human dignity specifically consists in man’s unique capacity to perceive and contemplate that splendorous order, and, thus, the most excellent form of human life is that which is given over to such contemplation. When a man capable of wisdom first learns of the life of philosophy, Plato’s letters tell us, he “thinks he has heard of a marvelous quest that he must at once enter upon with all earnestness, or life is not worth living.” We should wish to become lovers of wisdom, if we are not already, and this consists in a life shaped by certain practices and oriented toward a certain end, rather than in a specific knowledge.

In his Gospel centuries later, John indicates in his narrative of Jesus’ encounter with the Samaritan woman at the well that all human beings already are seeking this most excellent way of life—they just do not know where to find it. Gesturing to the well, the Lord cryptically tells her, “Everyone who drinks of this water will thirst again, but whoever drinks the water that I shall give him will never thirst; the water that I shall give him will become in him a spring of water welling up to eternal life.” In a dark room, we all immediately turn to a spark of light; we all thirst. We sense that light from above and water from below surround us as the inexhaustible reality we always need.

The craving for a water that so quenches our thirst that we shall never thirst again, a light that answers our most gnawing question, anticipates our sixth and final insight: This contemplation realizes itself in what we may call happiness or salvation, and it is characterized by an activity that resembles passivity, that is to say, not simply the absence of motion but a fullness of activity that is called peace and freedom. The whole of the Christian-Platonist tradition converges on “happiness” and “beatitude” as the terms best suited to name the purpose of human life, and it tells us that all our activities are ordained to that end. Because one could only achieve this in a condition that transcends the present, fallen earthly realm where all things pass away, Christians emphasize that happiness is just another name for beatitude as salvation. Aquinas, for instance, affirms that only the contemplative life realized outside of time is perfect happiness, and, crucially, this he describes as the dual-act of “knowing and loving God.”

James Matthew Wilson is Cullen Foundation Chair in English Literature and the Founding Director of the Master of Fine Arts program in Creative Writing at the University of Saint Thomas, Houston, as well as an award-winning poet and author of several books, including The Vision of the Soul: Truth, Goodness, and Beauty in the Western Tradition, from which this excerpt is taken, and which won the 2022 Parnassus Prize from Memoria College.