Using a structure built from several different types of argumentation, the dilemma corners your opponent by presenting him or her with a difficult choice between two unacceptable alternatives.

The most sophisticated and yet elegant argument form is the dilemma. If you know how to use the dilemma you have achieved the logical equivalent of a black belt. Using a structure built from several different types of argumentation, the dilemma corners your opponent by presenting him or her with a difficult choice between two unacceptable alternatives. There are only three ways to respond to a dilemma, two of which are the previously mentioned unacceptable alternatives, and one of which is called the “counter-dilemma,” an argument form that is equally as sophisticated as the dilemma itself.

One of the most famous examples of the dilemma and counter-dilemma is that of Euathlus and Protagoras. Euathlus, an aspiring rhetor (the ancient equivalent of an attorney), went to Protagoras, a famous teacher of rhetoric, seeking training in logic and rhetoric. But he couldn’t afford the tuition, so he made a deal with Protagoras.

Euathlus promised to pay the teacher half of his tuition up front and the other half when he had won his first case in court. Protagoras agreed. But after Euathlus graduated, several years went by and Protagoras still had not received the remaining half of the tuition. So Protagoras wrote Euathlus and demanded the other half of his money. Euathlus wrote him back and reminded his former teacher that he had promised to pay him back only when he had won his first case, and that he had never put his training into practice in the courts and thus had never won his first case. Therefore, concluded Euathlus, he did not have to pay the remaining tuition. 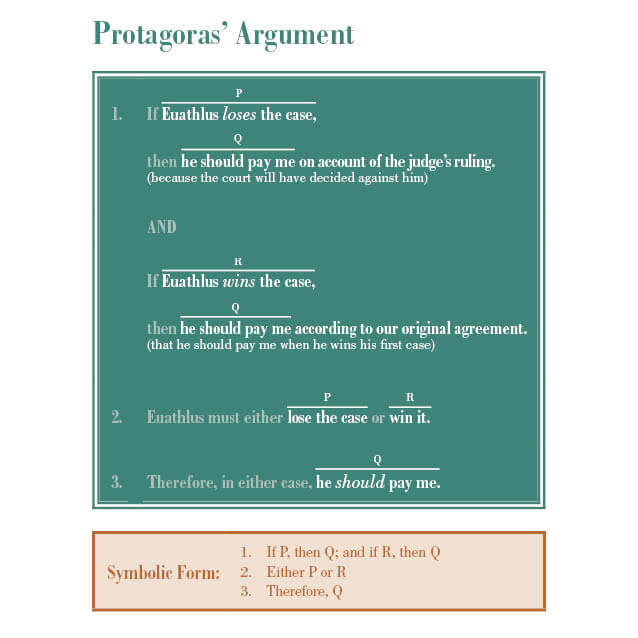 In logic, we often put words into symbols in order to see the form or structure of the argument. If you look at the box on the right, you will see, in symbolic form, Protagoras’ argument. “P” stands for “Euathlus loses the case,” “Q” for “Euathlus should pay me,” and so on. This will be important when we look at the next step in the dispute between the two men, both of whom—Protagoras because he was a master of the arts of logic and rhetoric, and Euathlus because he learned it from Protagoras—were well-versed in how to argue.

Euathlus well remembered this kind of argument form; Protagoras had taught it to him. But Euathlus also remembered something else he had been taught: There were three ways of getting out of a dilemma. The most complicated of these ways is called a counter-dilemma. It was this that he employed against his old schoolmaster. 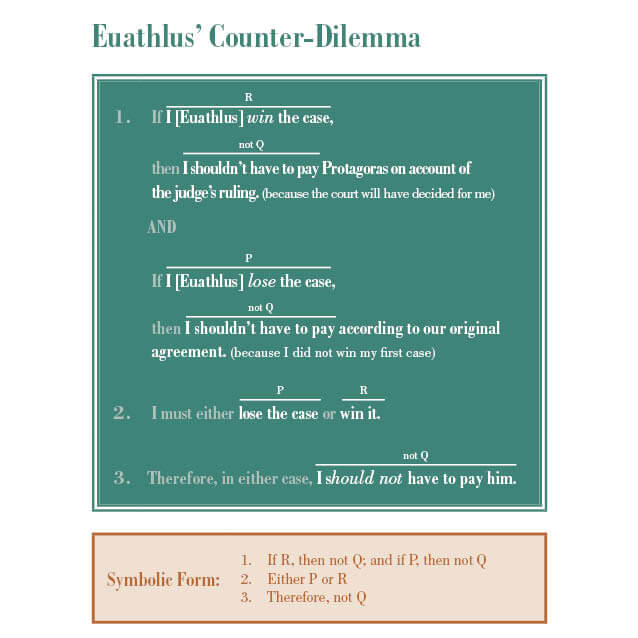 Once a student knows how to employ the dilemma and counter-dilemma (thereby indicating that he knows all of the different argument forms the dilemma incorporates), he has, practically speaking, mastered the system of traditional logic.