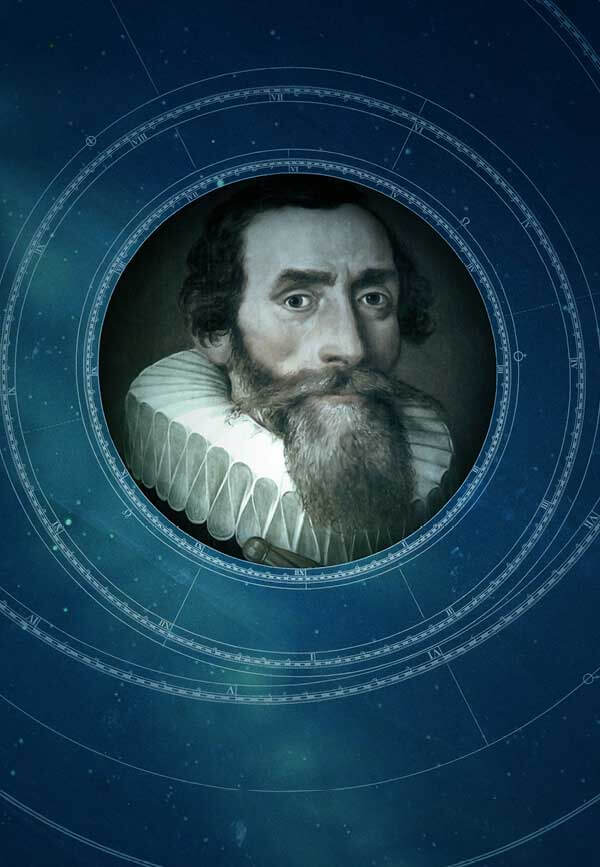 On the Feast of St. John the Evangelist in 1571, a baby boy named Johannes Kepler came into the world. Born prematurely, he was weak and sickly as a child. By the time he was born he had two brothers and a sister. When Johannes was five years old, his father left the family.

When Johannes was six years old, his mother, the daughter of an innkeeper, took young Johannes to a high place to view the Great Comet of 1577 which had attracted astronomers from around the world. At age nine, Johannes observed a lunar eclipse, later relating being called outdoors to see the spectacular event. His mother could not have known the impact these events would have.

Childhood smallpox left Johannes with crippled hands and weak vision that limited his observational abilities, but the spark of interest in astronomy and mathematics kindled by his mother remained. He was said to have captivated the attention of travelers to his grandfather’s inn by his mathematical insights.

In 1589, after Johannes had completed grammar school, Latin school, and seminary, he began further studies in theology and philosophy. Proving himself a great mathematician and astronomer, in a student disputation Kepler defended heliocentrism both from theoretical positing and from theological understanding.

Kepler discovered laws of planetary motion after years of arduous experimentation and observation. In Mathematics: Is God Silent?, author James Nickel notes that Johannes Kepler also became one of the first to use Napier’s logarithms to calculate the orbits of the planets. Kepler united theory with theology, experience with experimentation, and observation with ontology. In Epitome Astronomiae Copernicanae, one of Kepler’s works published between 1618-1621, he evidenced the influence of theology upon his mathematical understandings:

For He Himself has let man take part in the knowledge of these things and thus not in small measure has set up His image in man. Since He recognized as very good this image which He made, He will so much more readily recognize our efforts with the light of this image also to push into the light of knowledge the utilization of the numbers, weights and sizes which He marked out at creation. For these secrets are not of the kind whose research should be forbidden; rather they are set before our eyes like a mirror so that by examining them we observe to some extent the goodness and wisdom of the Creator.

Albert Einstein, in his 1934 Essays in Science, regarded Kepler’s approach to mathematics and astronomy as a basic principle of scientific work and commented: “Knowledge cannot spring from experience alone but only from the comparison of the inventions of the intellect with observed fact.” Johannes Kepler embodied a liberal education: grammar school, Latin school, mathematics and astronomy, history and literature, philosophy and theology. Kepler properly ordered them all.

Eleven years before he died, Johannes Kepler wrote this in Harmonices Mundi (The Harmonies of the World):

I give thanks to Thee, O Lord Creator, Who hast delighted me with Thy makings and in the works of Thy hands have I exulted. Behold! Now, I have completed that work of my profession, having employed as much power of mind as Thou didst give to me; to the men who are going to read those demonstrations I have made manifest the glory of Thy works, as much of its infinity as the narrows of my intellect could apprehend.

As we study nature and arithmetic, mathematics and astronomy, music and theology, together with our children we can proclaim the humble words of Johannes Kepler:

Great is our Lord and great His virtue and of His wisdom there is no number: praise Him, ye heavens, praise Him, ye sun, moon, and planets, use every sense for perceiving, every tongue for declaring your Creator. Praise Him, ye celestial harmonies, praise Him, ye judges of the harmonies uncovered … and thou my soul, praise the Lord thy Creator, as long as I shall be: for out of Him and through Him and in Him are all things; for both whose whereof we are utterly ignorant and those which we know are the least part of them; because there is still more beyond. To Him be praise, honor, and glory, world without end. Amen.

We can give our children evidence of the glory of God’s works, as much of His infinity as the narrows of our intellect can apprehend.