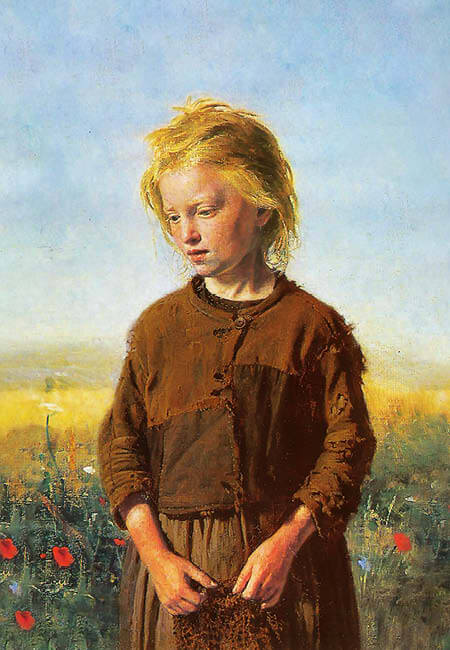 When I learned that this issue of The Classical Teacher would focus on fairy tales, I sought in-house counsel. My daughter readily climbed up on a chair, grabbed a book from her tottering stack, and produced a worn collection. Bookmarked by a thin clear “glass” wand, such as a fairy godmother might wave over one’s life, the pages opened.

“This is my favorite,” she explained matter-of-factly: “‘How Primrose Went to the Party,’ by Carolyn Sherwin Bailey.”

I had not heard of the fairy tale or the writer. I settled in to see what had so captivated my daughter for all these years:

The Prince who lived in the great white castle at the top of the green hill was to give a party, and he had invited the children from the village to come.

For days there had been talk of little else at the cottage doorsteps, and in the market place. Oh, the children all knew how wonderful a party at the Prince’s castle would be. The doors would be thrown wide open; in all the rooms there would be rose trees of every kind and color; birds would sing in golden cages; and each child would be given a feast and precious gifts.

There was something else, though, that the children knew. One must be dressed in a fitting way to appear at the castle of the Prince.…

All were ready to meet the Prince, they felt sure, except Primrose; she walked apart from the others for she had no party dress, and no gift to carry.

She was named Primrose because she made a poor, bare little hut on the edge of the forest bright, just as a wild flower makes a waste spot beautiful. In all her life Primrose had never been to a party, and now she was invited with the others. But her feet were bare, and her little brown dress was torn, and she had no hat to cover her wind-blown, yellow hair.

I paused here while reading to marvel at the similarity to Cinderella and all its retellings, including one of our favorite operas, Rossini’s La Cenerentola. How can a poor, discarded girl measure up to others in finery, wealth, or ancestry? I continued, curious:

As they went up the hill, the children passed a poor stick gatherer, bending under her great bundle.

“Off a pleasuring, with little thought for others,” the old woman mumbled to herself, but Primrose stole up to her side and slipped one soft little hand in the woman’s hard, care-worn one.

“I will carry half your sticks for you to the turn of the road,” she said.

And she did, with the old woman’s blessing on her sunny head at the turn.

Farther on, the children passed a young thrush that had fallen out of its nest and was crying beside the road. The mother bird cried, too. It was as if she said, “You have no thought of my trouble.”

But Primrose lifted the bird in her two hands and scrambled through the bushes until she had found its nest and put it safely in. The branches tore her dress that had been ragged before, but the mother thrush sang like a flute to have her little one back.

Just outside the castle gates, there was a blind boy seated, asking alms. When the other children passed him, laughing and chattering of all that they saw, tears fell down the cheeks of the little blind boy, for he had not been able to see for a long, long time.

The others did not notice him, but Primrose stopped beside him and put her hands softly on his eyes. Then she picked a wild rose that grew beside the road and put it close to his face. He could feel its soft petals, and smell its perfume, and it made him smile.

This made me smile. This single fairy tale had shaped my gentle daughter for many years without my knowing. I kept reading:

Then Primrose hurried through the castle gates and up to the doors. They were about to be closed. The children had crowded in.

“There is no one else to come,” the children shouted.

Then they added, “There is no other child except Primrose and she has no dress for a party and no gift for you, great Prince.”

But the Prince, his kind eyes looking beyond them, and his arms outstretched, asked, “What child, then, do I see coming in so wonderful a dress and carrying a precious gift in her hand?”

The children turned to look. They saw a little girl who wore a crown; it was the stick bearer’s blessing that had set it upon her head. Her dress was of wonderful gold lace; each rag had been turned to gold when she helped the little lost bird. In her hand she carried a clear, white jewel, her gift for the Prince; it was a tear she had taken from the little blind boy’s face.

“Why, that is Primrose,” the children told the Prince.

Overcome, I placed the clear wand back where it belonged and closed the book. The fairy tale ends with those simple words. I thought of the way my daughter takes the hand of an elderly woman to chat with her in the nursing home. I flashed to the many times my daughter has been shunned by other children. How this story must have comforted her.

“Though the Lord be high, yet hath he respect unto the lowly” (Psalm 138:6). G. K. Chesterton explains in “The Ethics of Elfland” that “the lesson of Cinderella is the same as that of the Magnificat—exaltavit humiles,” he lifts up the lowly. When a child is outcast, fearful, or lonely, a fairy tale reminds him that all is not lost. When a child becomes self-absorbed, arrogant, or mean toward others, a fairy tale reminds him that he ought not live this way.

Through fairy tales as a young boy, Chesterton writes that “there had come into [his] mind a vague and vast impression that in some way all good was a remnant to be stored and held sacred.” He continues: “I left the fairy tales lying on the floor of the nursery, and I have not found any books so sensible since.” In fairy tales, good is good, and evil is evil. Consider, he says simply, “what ethic and philosophy come from being fed on fairy tales.”

In this life we endure trials and we cause trials to others. No matter the griefs we cause or the griefs we endure, we can rest assured that abiding goodness, kindness, and love prevail. We have been made acceptable to attend the party. Whether in ourselves or in others, we see the rags. The Prince sees things differently.