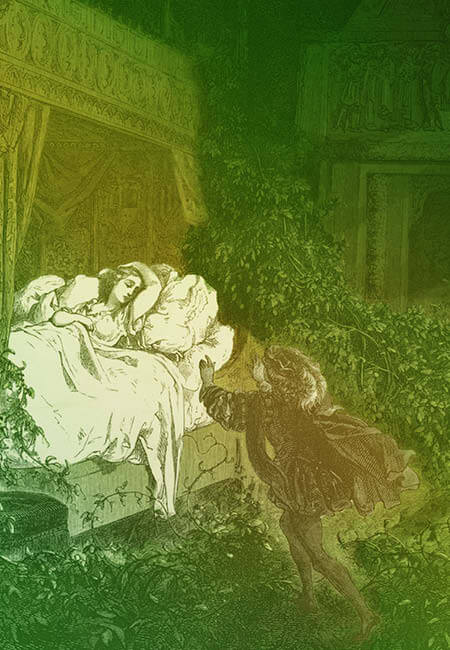 One night when our family was together, my six-year-old grandson came up to me (as he often does), grabbed my hand, and asked me to read him a story. So I walked over to the bookshelf where we keep our children’s books; it was getting late, and we needed something fairly short.

I glanced around until I saw an old copy of the story of “Sleeping Beauty.” We settled down on the couch with the Little Golden Book and he listened intently as I read.

Sleeping Beauty, as my grandson heard it that evening, is the story of a princess named Aurora who is visited by three good fairies—Flora, Fauna, and Merryweather—on the day of her christening. Flora gives her the gift of beauty, and Fauna the gift of song. But before Merryweather can give her gift, the ceremony is interrupted by Maleficent, the “fairy of darkness.”

Maleficent, upset at not being invited to the ceremony, casts a curse upon the child: On her sixteenth birthday Aurora will prick her finger on a spindle and die. But Merryweather, whose blessing was interrupted, still has her gift to give. She declares that the child shall not die, but only fall asleep until she is awakened by her true love’s kiss.

In an attempt to avoid the curse, the three good fairies take Aurora to a tiny cottage in the woods to raise her in secret, calling her Briar Rose. Just before her sixteenth birthday she meets a young man in the woods and falls in love with him, and he with her. Each thinks the other is a commoner. When she goes home and tells her fairy godmothers, they at last tell her of the curse. They explain that after her birthday, when the evil spell has ended, she will be taken back to the castle where she will marry a prince whom her parents have chosen for her. Briar Rose is crushed; she has met her true love and does not want to marry a prince she’s never met.

Meanwhile, Phillip, the young man in the woods, returns home to his castle and, after being reminded that he is not free to marry whom he desires but is to marry a princess of his family’s choosing, renounces his throne. He returns to the woods hoping to find Briar Rose, who by then has been taken back to her family’s castle.

When Briar Rose returns to the castle she is caught in the final designs of Maleficent, who lures her to a high room where she pricks her finger on a spindle and falls asleep. The three good fairies find her. They know that the only way to revive her is through her true love’s kiss, but do not know where to look for him.

When the fairies hear that Phillip has renounced his throne and family for the sake of a girl in the woods, they realize he is the man they need. They find him and arm him with three things: the Sword of Truth, the Shield of Virtue, and the Strength of True Love—an image of the True, the Good, and the Beautiful.

Maleficent, with all her evil power, confronts Phillip before he reaches Aurora. But evil, we learn, is no match for the True, the Good, and the Beautiful. Maleficent is defeated and Aurora, revived by her true love’s kiss, awakens. The two lovers, not knowing that they were promised to each other, get married and, of course, live happily ever after.

That, for anyone familiar with the tale, is also the Disney version of the story. Disney philosophizes the relationship between Briar Rose and the prince in a way that makes the story, in its simple and subtle way, a commentary on the problem of fate and freedom.

What is the problem of fate and freedom? It is that we want the assurance that the universe is under someone’s or something’s control and is not random (or, as the existentialists would say, “absurd”), but we also know that, in order to be truly moral creatures, we must in some sense be free to make the decisions by which we can be morally judged.

A similar problem becomes pronounced in early Christian thought, which held that God was sovereign and man responsible. It seemed as if we were caught in a dilemma: If God dictates everything that happens, then it would seem that man is not free to choose his own path in life, for God has already set the course of his path, and if man is free to choose his own path, then God is not sovereign over the course of man, since man determines his own path.

How do we avoid impaling ourselves on one of the horns of this dilemma? Much parchment was expended in trying to deal with this problem, and the history of Christian thought is filled with attempts to solve it.
“Many writers,” said the Dutch Reformed theologian Herman Bavinck,

argue either in such a way that they attribute all things and events to the will of God and consider resistance impermissible, or they limit God’s providence and place many things in the hands of humans.… Scripture, however, warns us against both this antinomianism and this Pelagianism; it cuts off at the root all false fatalistic resignation on the one hand, and all presumptuous self-confidence on the other. 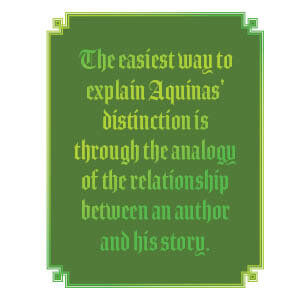 But how can these seemingly conflicting truths be reconciled? Augustine planted the seeds of an explanation in the early fifth century A.D., which culminated in a distinction made explicit by Thomas Aquinas—that between primary and secondary causation—a distinction accepted by Christian thinkers of diverse traditions.

The easiest way to explain Aquinas’ distinction is through the analogy of the relationship between an author and his story. The events in every story—from the thoughts and actions of the characters to the consequences of the plot—are dictated by the author. This is primary causation.

From the perspective inside the story, however, every character makes his own decisions. They seem to perfectly follow from prior conditions within the story, and the actions of the characters seem to be the products of their own free will. This is secondary causation.

But the analogy is not perfect because, of course, a human author is different from God the Author; a human writer can only fabricate characters, can only approximate the act of true creation. God is a Creator, but man, in J. R. R. Tolkien’s words, is only a subcreator. An author’s characters in a story are automatons, only capable of reflecting the will and ends of the human author.

God is an author in the supreme sense: In His act of real creation, He makes possible our every action. In His sovereignty every character has his beginning, middle, and end, yet He stirs up and makes possible the self-activity of humans. Humans have natures capable of acting towards their own ends, but God, through His grace, is behind it all.

Although the Greek poets could not have articulated the causes precisely this way, they seem to have had the same insight, only from the perspective of poetry rather than philosophy. They were able to portray
the primary vs. secondary relationship—which is best explained through the author-story analogy—in a slightly different way, by giving the primary and secondary orders roles within stories themselves.

In Homer’s Iliad, the gods are the primary causes, cast as characters in the story. They issue their immutable decrees while the human actors make their seemingly independent decisions (secondary causes), bringing about their foreordained destiny.

In Sophocles’ Oedipus the King, the protagonist, Oedipus, attempts to flee the destiny proclaimed for him by the Oracle at Delphi that he will kill his father, marry his mother, and bring destruction on his native city. Oedipus knows the prophecy and tries to flee it, but because of his ignorance of his origins, the acts he thinks are defying the prophecy turn out to be the very acts that bring the prophecy about. The primary causes initiated by the Fates are brought about through the very will of Oedipus, who is in the role of the secondary cause.

In the Disney version of the story of Sleeping Beauty, we see these two levels of causation operating in much the same way as the Greek poets used them. Briar Rose and the prince meet in the woods—the realm of secondary causation. They freely fall in love. They each decide to marry the other. Each has come to know the other, but neither knows the other’s place in the larger order of things, the order of primary causation—the order of their parents and their kingdoms. Briar Rose does not know that Phillip is a prince, and Phillip does not know that Briar Rose is a princess.

When they each return to their families and to their roles in the wider world, they discover that they are each betrothed to someone else—the princess to a prince, and the prince to a princess. Each of their marriages has been decided for them. They have no choice in the matter if they wish to remain in the primary order—the order of kings and queens and princes and princesses.

The only option for Phillip and Aurora is to attempt to defy the predestined end, to renounce the “gods” of the primary world in favor of freedom.

What they find out in the end is that the person to whom each has promised himself (and herself) is the very person to whom each has been promised to. Aurora discovers that the handsome man in the woods whom she loves is the prince she is destined to marry, and Phillip discovers that the beautiful maiden in the woods whom he loves is the princess he is destined to marry. Their choice was made in complete freedom, and yet, unbeknownst to each, the choice was made for them. The decision they make is the decision that is made for them.

From two different perspectives, it looked to be two different things, but in reality they were one and the same. Their lives were written for them by authorities greater than they, and, at the same time, they also decided it themselves. And so it is in this world, here, as Lord Dunsany put it, in the “fields that we know.”

None of this should seem strange to us, we who act out our roles in a story in which the divine Author has cast Himself in the leading role.

So the Greek poets saw it, and so the Christian theologians have explained it.