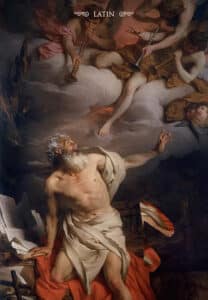 “A language must die to be immortal.”

When it comes to expressing the eternal and immutable truths of the Christian faith, the only good language is a dead language. Chesterton once made a disarming retort to the customary detraction of Latin as a dead language. He simply remarked that to say this is not a detraction at all, for quite in contrast to the detractor’s intentions, it throws into profile the clear ascendancy of Latin over all the “living” languages of today:

It is the question of a dead language and a dying language. Every living language is a dying language, even if it does not die. Parts of it are perpetually perishing or changing their sense; there is only one escape from that flux; and a language must die to be immortal.

Yes, indeed, pagan Latin eventually bit the dust, and the Western mind turned with relish to the new throng of spawning tongues which began to mottle the linguistic map of Europe. But then came one of those bizarre turns in human history that makes us wonder just how human it really is. After Rome had lost its imperial dignity to Byzantium, and furthermore taken the moral nosedive of soaking its arenas in Christian blood, it would have surprised no one had the last dying syllables of the Empire’s language remained inaudible to history. But at the opening of the fifth century, within the African walls of Hippo, St. Augustine was penning the last chapters of The City of God and must have looked up from his desk every few minutes or so, wondering if Genseric’s hordes were going to bring his episcopal residence down on his head. With the grace of God, Augustine finally brought his book to an end, but in the interim, the Vandals had also brought Hippo to an end. Latin died to the world. This was in 430 A.D.

Just years before, St. Jerome had completed his Latin translation of the Bible. He did his work largely in Palestine, as St. Augustine had in Africa, but in Rome itself, where the Hellenized Jewish converts had arrived with the Good News from Palestine, many of them turned their energies to the translation of the Greek Gospel and liturgy into a Latin the waning Romans could understand. The language was dying, but the souls of those who still spoke it were nonetheless in need of salvation.

To everyone’s surprise, there rose upon the field of this purely instrumental effort something like a linguistic renaissance, as a host of prefaces, collects, orations, secrets, and post-communions grew into what is known to us today as the Leonine Sacramentary.

Roman civilization went on and died; the last emperor unceremoniously left the scene in 476 A.D. But paradoxically, the heart of the Latin language was still beating strongly, and its conjugations and declensions were carried on the breath of a new host of talkers. But there was a difference: For what these men were talking about was something hitherto unheard of on the street corners of history, and statements were being made that no period of Cicero’s had even remotely embraced.

This is Chesterton’s point. The Latin language died, indeed, but the death it died it died to the world. In the small enclave of the Christian Church, the same language experienced nothing less than a miraculous resurrection; and the analogy can be pursued to the end. The bloodless carcass of the language, filled to the skin with the earthbound schemes of the ancients, could no longer respond to the soul of paganism; like every merely natural body, the life that had sustained it was merely mortal. So history slowly dragged it off to the grave, that one more might be added to the thousand withered tongues of time. 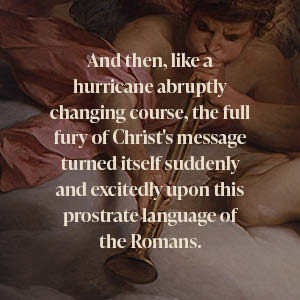 But then came Latin’s Easter sunrise, for after the Gospel of Christ had been rejected by the Jews, the Prince of the Apostles sealed his witness to the Master by reddening a hill in Rome we now call the Vatican. And then, like a hurricane abruptly changing course, the full fury of Christ’s message turned itself suddenly and excitedly upon this prostrate language of the Romans, and, lifting a hand over its lifeless heap of words—all of them tongue-tied by centuries of unanswered questions—it cried out, “Ephphatha!”—and the tongue was loosed, and Christian Latin began to speak to the world.

The Christian Latin which we find in the Vulgate, in St. Augustine, in the Latin Fathers, and in the early Sacramentaries is not just a salvaged Latin, shaken, dusted off, and clumsily recycled in an age that had lost the inspiration of the days of Virgil and Horace. This was the Renaissance view of the matter. It is rather a language reborn through obstetrics irreducible to ordinary linguistic evolution; and what the literati mistake for barbaric unsophistication is rather the dignified simplicity demanded by the mysteries of a God who is Simplicity Itself. The anointment of the Spirit seems to force this Latin to move about more modestly, with a kind of self-forgetful gait, but for all this it moves far closer to the hushed world of God’s most intimate secrets.

This is the first claim I should like to make for Christian Latin, namely that it was the same language that had “known” the wisdom of Greco-Roman antiquity, but had died a natural death as that wisdom exhausted its resources. It then was resurrected from the dead by the supernatural Truth of Christ.

The second claim I raise is this: though Christian Latin was not born with Christianity itself, it was nonetheless born with Christian theology, and thus, not only its characteristic simplicity (at least when compared with classical Latin), but also its new world of meanings grew apace with the new understanding of the faith. The unique powers of Western speculation, starting with Augustine and one day to climax in the overwhelming Latin edifice of Aquinas, were fruits borne in the language in which Christian thought first moved and matured.

The third claim is the most pertinent of all, at least for us who ride on the stampede of modern progress. Chesterton observed that the only way for a language to be truly living is to die and to resurrect by the agency of a higher, life-giving force (such as the Church). The common, vernacular tongues of everyday life are immersed in the contingencies of time and subject to the vagaries of the world’s currents of change. All the spoken languages of the world are undergoing slow deaths, and parts of them are being draped every day in black. But the only reason I bring all this up is the effect it has on our ability to think and talk about immutable doctrines.

Certainly we need to speak supernatural truths in the vernacular as well, but I am afraid we will have to drink the doctrine fast, for these old wineskins are hardly better than paper sacks, and the weakness of our fickle contemporary tongues is tearing leaks in the fabric of the language almost as fast as we utter our words. If the truths of the faith are forever new (as they most definitely are), then we should keep them well nested within a language that has already been lifted above this linguistic mortuary we inhabit, invested with some share in the unchanging status of eternity, and thus made dead to this world and alive to another.