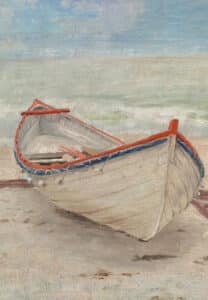 In 1965, on the small island of Tonga in the South Pacific, six schoolboys, ranging in age from thirteen to sixteen, “borrowed” a local fisherman’s boat and took it on a joyride that lasted over fourteen months. They  were bored, and so they decided to sail for Fiji, another South Pacific island five hundred miles away. Not thinking to bring a map or a compass, and provisioning themselves with only some bananas, coconuts, and a small gas burner (they were boys, after all), they set forth on their adventure.

The boys sailed vaguely in the direction they thought Fiji might lie and eventually fell asleep. They awoke in a storm; the sail was ripped from the small craft by the wind and they lost their rudder. After the storm abated they floated for eight days.

One morning they woke up and saw a small island—not a tropical paradise but a “hulking mass of rock jutting up” out of the ocean. They managed to swim ashore, to what they later discovered was the small island of ‘Ata. They were marooned on a desert island.

Dutch writer Rutger Bregman tells the true story of this very boyish adventure in his book Humankind: A Hopeful History. He acknowledges the similarities to William Golding’s Lord of the Flies, where a group of British schoolboys are stranded on a jungle island. Several of the boys take over and inaugurate a reign of terror. But the similarities extend only as far as the circumstances. In Golding’s story, the worst aspects of the human soul assert themselves. For the youthful castaways on ‘Ata, it was much different.

At first the boys just tried to stay alive. “They survived,” says Bregman, “initially on fish, coconuts, tame birds.” And when one boy broke his leg, the others set it with sticks and leaves. But the boys eventually discovered a crater where the original natives, taken away on a slave ship in 1863, had once lived. “There,” Bregman recounts, “the boys discovered wild taro, bananas and chickens (which had been reproducing for the hundred years since the last Tongans had left).”

The fisherman who finally rescued the boys recounted what he found when he got there:

[T]he boys had set up a small commune with a food garden, hollowed-out tree trunks to store rainwater, a gymnasium with curious weights, a badminton court, chicken pens and a permanent fire, all from handiwork, an old knife blade and much determination…. The kids agreed to work in teams of two, drawing up a strict roster for garden, kitchen and guard duty. Sometimes they quarrelled, but whenever that happened they solved it by imposing a time-out. Their days began and ended with song and prayer.

Unlike the boys in Lord of the Flies, the Tongan boys worked well together and managed to create their own semblance of a society. How did they do this? Not only had they learned enough of growing food to create their own gardens, but they also knew the songs they needed to sing and the prayers they needed to pray to grow their souls. One of the boys, who had prayed repeatedly to God to save them, promised to become a minister if he survived. He did survive, and he became a minister.

Eugen Rosenstock-Huessy once said that a citizen is a person who, if need be, could recreate his own civilization. These boys had been taught the rudiments of Western civilization by the teachers at their

boarding school. And, when faced with the necessity of recreating it, they did.

Western civilization is a complex and magnificent thing, but in many ways it is imperiled today. If it were suddenly to topple, would our children know it well enough to recreate it?