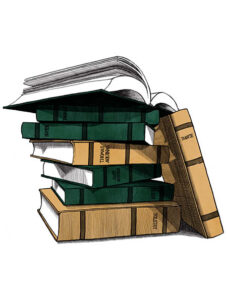 In Aesop’s well-known fable, “The Ant and the Grasshopper,” the lazy Grasshopper fails to prepare for the future, choosing instead to sing away autumn days in the sun. The industrious Ant, by contrast, works hard collecting grain and preparing for the upcoming winter. The story tells us that when winter finally comes, the hungry Grasshopper begs the well-prepared Ant for food but ends up disappointed when his request is refused and he must suffer the consequence of his choice.

Since nursery school we have been taught to celebrate the conscientious Ant and condemn the myopic Grasshopper in this story. As thoroughly modern Americans we know that it is foolish to be ill-prepared; we are supposed to work hard gathering provisions, skills, and tools that will serve us practically in the future. Pragmatism is the very air we breathe. We’re supposed to root for the perfectly practical Ant.

But maybe we’ve been celebrating the wrong bug. Maybe the Grasshopper is actually a better classical hero? Perhaps the instrumental insect deserves a pardon?

A little knowledge about the twelve-month lifecycle of grasshoppers gives us a fresh perspective on Aesop’s fable. An important fact about  grasshoppers is that they are not made for winter at all. By God’s design, they naturally die in late fall. It is not necessary for them to prepare for the upcoming winter because it is a season they will not see. Instead of gathering futilely, the grasshopper, in the full maturity of its final days, graces the world with song.

We’ve long been trained to exalt that very pragmatic Ant, but isn’t it possible that the Grasshopper honors its nature and fulfills its purpose just as beautifully? The pragmatist doesn’t appreciate the six-legged songsmith; he condemns the Grasshopper as an idler because he misunderstands the insect’s End.

Pragmatism, the hard-nosed, hard-working philosophy so characteristic of the practical modern misunderstands our End as Christians, too. Pragmatism can lead us to prepare for seasons that will never come and destinations that are not meant for us. Its engine is fear, not faith. Rather than leaving space for God’s providence, Pragmatism presumes that we can predict what God intends for our earthly futures. And it scares us into forgetting our ultimate Home, where the size of our stockpiles matters not at all. As champions of classical education we understand our purpose and place differently.

When Pragmatism influences education, we give higher value to specialization and vocational training than we do to broad knowledge and wisdom, which prepare us to answer God’s unexpected calls. When we pursue only what is “practical”—chasing prosperity—we focus on developing skills to the exclusion of virtues. And when we strive only for material comfort and security, we  misunderstand where our ultimate Home truly lies.

Pragmatic ideology causes earnest and committed parents and teachers to worry about their students: What will they ever do with a classical education? Why should they study languages that no one even speaks? What kind of job will they get if they study ancient books? How will they make money? Why read classical literature instead of just learning a STEM skill?

C. S. Lewis, classicist and devout Christian apologist, helps us answer these questions. Lewis, recognizing Pragmatism as the temptress that she is, suggests that this brand of worldliness is a subtle snare of the Devil. In The Screwtape Letters, Screwtape, a junior demon, explains that

Prosperity knits a man to the World. He feels that he is “finding his place in it,” while really it is finding its place in him. His increasing reputation, his widening circle of acquaintances, his sense of importance, the growing pressure of absorbing and agreeable work, build up in him a sense of being really at home in earth, which is just what we want.

Lewis routinely takes swipes like this at Pragmatism. But he also acknowledges that even when we pursue Truth, Goodness, and Beauty as priorities, it’s easy for practicalities to commandeer our time and distance us from those we love—our people and our God. Lewis seems to understand how, unconsciously, life can descend from a love song to a laundry list.

Lewis points out in The Four Loves that

… it is the practical and prudential cares of this world, and even the smallest and most prosaic of those cares, that are the great distraction. The gnat-like cloud of petty anxieties and decisions about the conduct of the next hour have interfered with my prayers more often than any passion or appetite whatever.

We relate. But, no sooner than we vow to refocus, we dismiss the romantic notion that it’s possible to deemphasize the daily duties of life. Of course, we must be practical, to some extent. The problem, however, is that if we relent entirely to practicalities, what begins as distraction can end in disaster. Failing to lift our hearts and minds out of the workaday world where we earn profits and praise tempts us to forget the Great Reward.

Lewis, for his part, reminds us to keep first things first every chance he gets. And he begins his lessons early for young readers in The Chronicles of Narnia. In the series, Lewis persistently rejects Pragmatism and, for good measure, characterizes several villains in his canon—explicitly—as practical. Before his transformation, Eustace Scrubb in The Voyage of the Dawn Treader is repeatedly described in this way. He reads “all the wrong books” and can offer all sorts of factual explanations—but mostly for the purpose of explaining away beauty or goodness. In The Horse and His Boy, the untruthful Fisherman Father speaks in efficient and applicable maxims, not Narnian poetry and song, for “he had a practical mind.” Uncle Andrew, the self-interested magician in The Magician’s Nephew, is cowardly, arrogant, and self-serving. He too is described as “dreadfully practical.” He develops his “craft” only for personal gain and exults, foremost, in the commercial and financial viability of the worlds he and the children discover. Finally, in The Lion, the Witch and the Wardrobe, Jadis the White Witch is the supreme villain of Narnia and, again, is painted with similar strokes:

… [M]ost witches are like that. They are not interested in things or people unless they can use them; they are terribly practical.

Classical Christian education seeks to create, not pragmatists, but “new men,” people who are humble, self sacrificing, and who put their faith in a dependable God. It is an education that pursues heavenly things before worldly things and values not just results, but development. It exalts the journey toward the True, the Good, and the Beautiful, and realizes that they aren’t fully attainable on earth. Like The Dawn Treader, classical Christian education is a vessel that seeks to carry its students forward on a great journey to noble things and, hopefully, and most importantly, to Aslan’s country itself. And to those who question the “use” of such a journey, the supremely knightly Reepicheep responds:

Use? Use, Captain? If by use you mean filling our bellies or our purses, I confess it will be no use at all. So far as I know we do not set sail to look for things useful but to seek honor and adventure. And [the voyage to Narnia] is as great an adventure as I have heard of.