The Founding Fathers were of varying backgrounds and disparate political beliefs, but they shared two characteristics that distinguished them from other men of their time—and from most men of any time: wisdom and virtue. And it is for this reason, beyond just wanting to become familiar with who they were and what they did, that many parents are interested in teaching their children about the men who founded the United States of America. But more than just teaching our children about these men, many of us are also interested in how our children might become more like them. So rather than just admiring them for these traits, we should strive to understand how they came to possess them.

When Alexander Hamilton entered King’s College (now Columbia University) in 1773, he was expected to have a mastery of Greek and Latin grammar, be able to read three orations from Cicero and Vergil’s Aeneid in the original Latin, and be able to translate the first ten chapters of the Gospel of John from Greek into Latin.

Thomas Jefferson received early training in Latin, Greek, and French, and then continued his formal education at a classical academy in preparation for attending the College of William and Mary, where his classical education continued, along with his study of law.

“Americans view the Founding Fathers in vacuo, isolated from the soil that nurtured them,” says Tracy Lee Simmons in his book, Climbing Parnassus: A New Apologia for Greek and Latin. For the founders, says Simmons, instruction in wisdom and virtue came principally from two places: “the pulpit and the schoolroom.” 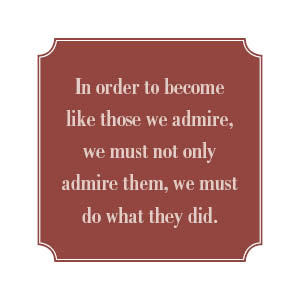 The typical education of the time—what we would now call a classical education—began at about age eight. Students who went to school were required to learn Latin and Greek grammar and to read the Roman historians Tacitus and Livy, the Greek historians Herodotus and Thucydides, and to translate the Latin poetry of Vergil and Horace. A formal education also stressed the seven liberal arts: grammar, logic, and rhetoric (the trivium), as well as arithmetic, geometry, astronomy, and music (the quadrivium).

Several of the founders, including John Adams and John Hancock, attended Harvard. The sole academic requirements for admission to Harvard University in the 1640s were as follows: “When any scholar is able to read Tully [Cicero] or such like classical Latin author ex tempore and make and speak true Latin in verse and prose suo (ut aiunt) marte [by his own power], and decline perfectly the paradigms of nouns and verbs in the Greek tongue, then may he be admitted into the college, nor shall any claim admission before such qualifications.” No ACT or SAT scores. No application essays. Just Latin and Greek.

Students were also required in these early years of Harvard, with limited exceptions, to use only Latin in class or in class assignments. Some of this undoubtedly changed by the time the founders attended, but not much. When it came to classical education in colleges of colonial times, they took no prisoners.

Classical influences were pervasive in the schoolroom, but it didn’t stop there. Even what Americans heard from the pulpit was imbued with classical references and allusions. Today it is not uncommon to hear some say that Christians should shy away from the pagan authors of antiquity, but this is an idea the generation of the founders—including great Christian thinkers such as Cotton Mather and Jonathan Edwards—would simply have considered preposterous. In fact, all of the great Christian theologians and thinkers of early America were soaked and steeped in the classics. Not only did they think a classical education was consistent with a Christian vocation, they considered it absolutely essential.

How the Classics Influenced the Founders

If the founders were steeped in classical thought, how did it affect their own thinking about the new nation? For one thing, it inculcated in them a respect for the lessons of history, which is readily apparent in their writings and debates about how to construct the American Republic. “I have but one lamp by which my feet are guided,” said Patrick Henry, “and that is the lamp of experience. I know of no way of judging of the future but by the past.”

They combed the annals of the ancients for examples of governments that worked well—and for those that did not. They knew, well before the philosopher George Santayana was born to say it, that “Those who cannot remember the past are condemned to repeat it.”

“These men,” says Simmons, discussing the Philadelphia debates in 1787, “had read and digested Polybius, Aristotle, and Cicero, and they used the ancient luminaries to frame and illustrate their ideas before the assembly…. These heated yet erudite debates, along with the Federalist Papers, fairly pullulate both with subtle classical allusions—with which Madison, Hamilton, and Jay assumed readers to be tolerably familiar—and direct references to the leagues—Amphictyonic, Achaean, Aetolian, Lycian—formed by the ancient Greeks in order to achieve political and physical security.”

To become inspired by the great deeds of great men is to obtain the motivation to do similar things. But while we can admire other men, that won’t necessarily make us more like them. In order to become like those we admire, we must not only admire them, we must do what they did.

It is tempting to look back on the education of these great Americans and think that their course of education is too difficult for the students of today. But that would be a grave mistake. The fact is that we have advantages they didn’t have. For example, the educational resources available to colonial children were not only harder to find, but of vastly inferior quality than today.

We can, moreover, say we lack their fortitude, but that is not something they brought to their education—it is a benefit they received from it.

Education is the cultivation of wisdom and virtue. In deciding how to accomplish this with our own children, we would do well to see how it was done in a time when wisdom and virtue were more prevalent than in our own.