Notice: Trying to get property 'display_name' of non-object in /var/www/html/public_html/wp-content/plugins/wordpress-seo/src/generators/schema/article.php on line 52
Skip to content

As an English professor, lecturer for the Honors College, and public speaker, I am afforded many opportunities to guide students of all ages and backgrounds through Homer’s Odyssey. One thing I love to emphasize along the way is how committed Odysseus, Telemachus, and the other noble characters are to the laws of xenia.

Based on the root word xenos, which means “foreigner” (hence our word “xenophobia”), xenia is the Greek concept of hospitality that established the rules by which strangers and other suppliants were to be received and treated. In a world without passports or police or international law, safe travel relied on a system in which all civilized people agreed to play the role of guest or host in accordance with certain standards.

If you were the host, you were to take in all strangers without asking their names. Only after you had fed them and showed them hospitality were you to inquire after their identity and their story. So the Phaeacians treat Odysseus and so Telemachus treats Athena when she comes, disguised, to the palace of Ithaca. The Cyclops Polyphemus, on the other hand, immediately asks Odysseus for his name and then promptly eats two of his men.

The guest, too, was expected to adhere to strict codes of conduct. He was not to overstay his welcome or steal from his host. Telemachus and Odysseus prove to be good guests in the various homes where they stay. Penelope’s suitors, in sharp contrast, eat her out of house and home, abusing her servants and sleeping with her maids. Odysseus’ men also prove to be bad guests when they devour the sacred cattle of the sun god. It is this breach in xenia that leads to the death of Odysseus’ crew, setting apart our hero (who alone does not touch the cattle) as the sole survivor of the journey from Troy.

Such are the external rules of xenia. What I really learned from my frequent readings of the Odyssey, however, was not so much the rules themselves as the attitude of heart that goes with them. No one exactly teaches Odysseus and Telemachus how to follow xenia. Rather, the good man absorbs from those around him the kind of behavior expected of a gentleman.

A similar ethos of hospitality runs throughout the Bible. Abraham shows xenia to the three angels who come to his home and he is blessed, while the evil citizens of Sodom seek to abuse those same angels and are destroyed. Rahab the harlot takes in the spies and her family is spared when Jericho is put under the ban; Herod the Great slaughters the innocent children of Bethlehem and dies a wretched death.

Though the ancient Greeks, lacking special revelation, did not understand the biblical definition of justice to be mercy for the widow and orphan, they did understand that hosts have obligations toward their guests and other strangers in the land. In my own life, I learned xenia from Homer before I learned it from the Bible. Indeed, it was because of my earlier love for Homer that I felt a thrill of pleasure when I first read these words in the New Testament: “Be not forgetful to entertain strangers: for thereby some have entertained angels unawares” (Hebrews 13:2).

Telemachus taught me the importance of being attentive, of picking up on social clues without having to be formally instructed. But he taught me even more the importance of internalizing such things, of writing them on the heart. Xenia expressed in a legalistic, grudging way is not true xenia. One should not merely treat guests well; one should enjoy having guests and take pleasure in the fellowship that follows. The New Testament treats hospitality as an important gift (see 1 Peter 4:9, Romans 12:13, 1 Timothy 3:2, and Titus 1:8), and the Odyssey presents it as a key indicator of inner nobility. 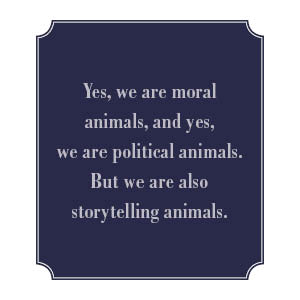 Xenia became for me a cornerstone of the good life. Too often people give charity in a somber spirit, receiving people into their homes (and their hearts) as a religious exercise rather than a joyous privilege. Communal feasting in the Odyssey is an affirmation of the human spirit, of the fact that we are not souls trapped in bodies but enfleshed souls. To rush through dinner, or worse, to eat it with the television on, is a profanation of the sacredness of food. Every meal taken with thanksgiving and shared in fellowship is an agape supper, a love feast.

Homer taught me to feast, and he taught me one further thing, something that goes with the feast and makes it all the richer. After Odysseus returns to Ithaca and Athena disguises him as a beggar, he is taken in by his faithful swineherd, Eumaeus. After sharing with the beggar his meager fare, Eumaeus offers his guest two options: They can go to bed and sleep, or they can stay up all night and tell stories. The beggar and the swineherd choose the latter, and I have spent most of my life choosing it as well.

Even one’s sorrows and woes, Eumaeus wisely explains, become precious things when they are shared, in recollection, with another. I pulled many an all-nighter during my college years, but very few of them were motivated by the need to finish a paper. I stayed up late to share stories with my college mates, even as I stay up late to talk and fellowship with the students who come to my home for Bible study every Thursday night during the fall and spring semesters.

Memory, I have come to believe, is the most intimate part of who we are, and when we share memories—whether they be personal memories or the collective memories of our culture and tradition—we form bonds that cannot be defined in biological or sociological terms. Yes, we are moral animals, and yes, we are political animals. But we are also storytelling animals.

I can know every fact about a person’s height, weight, hair color, ethnicity, education, and work experience, and still not know him at all. But let him share with me one story from his past, a story of how he interacted with a person or a book or a mountain, and I will know him as a fellow human being who is nevertheless distinct from every other human being who has ever lived and breathed and dreamed on planet Earth.

The Odyssey tells one of the great stories, but it also tells of the importance of telling stories. It tells of a one-of-a-kind man who comes home and a one-of-a-kind boy who becomes a man, yet both man and boy are universal figures whose stories are our stories. And the story goes on, and we are all a part of it.