Can a book with a heroine—as opposed to a hero—be a great book? 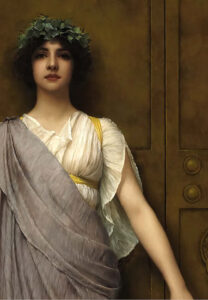 It probably sounds like a silly question—or a disingenuous one: one you would never be allowed to answer with a “no,” even if you wanted to.

Let me explain. Aren’t we generally more hesitant to ask boys to read books with female protagonists (Anne of Green Gables, Little Women) than we are to ask girls to read books with male protagonists (Treasure Island, Huckleberry Finn)? If so, isn’t this hesitancy based on the assumption that girls will relate to male protagonists more easily than boys will relate to female ones? Isn’t the deeper assumption that there is something more universal, less particular about the male experience of the world, or perhaps that the female mind is better able to perceive universality?

Or take this example: Ask a woman why she is reading the Iliad and I can almost guarantee that she will not reply, “In order to better understand men.” Such insight might be a byproduct, but it is rarely the intention. Female readers read the Iliad, just like everyone reads the Iliad, in order to better understand humanity. Achilles’ experience is not a gender-exclusive one. The longing for honor and immortality through great deeds, the terror of death and being forgotten, is manifested in his story in masculine ways (on the battlefield)—but it is a human terror and longing, not a male one. So with Dante lost and wandering in his dark wood. So with Ishmael and his damp, drizzly, November of a soul.

But can we say the same about books with heroines? Ask a man why he is reading an Austen novel and he probably will not say it is in order to better understand himself.

Can a heroine be an Everyman the way a man can? In Persuasion, the novel in which Austen most explicitly pits the male and female experiences against each other, she may offer some insight into why the female experience at least appears less universal. The novel’s heroine, Anne Elliot, broke off her engagement with naval captain Frederick Wentworth eight years before the novel’s opening out of an excess of prudence. As the novel draws to a close, their friendship has been partially restored, but Anne is uncertain whether Wentworth will be able to overcome the pride, resentment, and jealousy he feels enough to acknowledge and declare his love for her. In the novel’s climactic scene, she and Wentworth’s friend, Captain Harville, embark on a debate as they wait for Wentworth to finish writing a letter nearby. They debate the strength of male and female faithfulness— whether men’s or women’s love is more lasting. Anne’s argument is that because men live more active lives, because they have “exertion … profession, pursuits, business” that “take [them] back into the world” it is only natural—and, in fact, only fair—that men should have the weaker feelings: “You have difficulties, and privations, and dangers enough to struggle with,” she tells him. “It would be hard indeed … if a woman’s feelings were added to all this.” On the other hand, she says, women “live at home, quiet, confined, and [their] feelings prey upon [them].”

Whether or not Anne is fairly characterizing male and female experience, especially in the modern era, it strikes me that she is quite aptly characterizing male and female stories. Where male-driven stories tend to involve journey and adventure, risk and physical danger, female stories—stories with heroines—tend to be somehow confined, enclosing characters and readers inside something. To speak in broad terms, stories with female protagonists tend to have a different sphere of operations: internal, relational, domestic; much more goes on in the house, in conversation, in her head. More often than not, we watch a woman’s feelings prey upon her.

Perhaps, then, the problem of a female story’s universality has to do not so much with the central female figure as with the sort of world, the sort of narrative, she tends to inhabit. A fight to the death, a descent into hell, a sea voyage in pursuit of a mysterious phantom creature—all have something resonant, rich, pregnant about them that other and different experiences can plug into. Men and women alike can map their own experiences onto the grandeur and enormity of these visions—they have “room” enough inside them. We can each have our “Hector,” our “Virgil,” our “Great White Whale.” But are the narratives in which heroines tend to reside too particular, too interior to invite such association, to embrace such a range of experience? As they open inward, do they simultaneously shut out? If one doesn’t happen to have social acuity or emotional sensitivity or an interest in people and relationships, is one necessarily excluded?

The Odyssey is another book about sailors, homecoming, and faithfulness, another book in which a man and woman reunite after a long time apart. Odysseus has spent nine years wandering in the strange places of the earth, facing off against monsters, witches, antagonistic divinities, struggling to get home, while his wife Penelope awaits his return. When in the end Odysseus finally reveals himself to her, they embrace, weeping, and Homer uses a curious epic simile. It describes a man washing to shore “after Poseidon has smashed [his] strong-built ship on the open water” and he has “escape[d] the gray water landward by swimming.” It describes, in other words, the very experience Odysseus has just had. As the simile winds down, we expect it to refer, then, to him—as the shipwrecked man “gladly . . . set[s] foot on the shore,” so Odysseus is coming back to “land,” finding rest from his suffering in his wife’s embrace. But that is not what the simile describes. Rather, we find, it refers to Penelope:

… as the land appears welcome to men who are
swimming … so welcome was her husband to her as she
looked upon him, and she could not let him go.

Like most of Homer’s similes, this one demands that we re-see, re-understand, the thing being described in light of this comparison. Penelope, he is declaring, has also been on a terrible journey—despite the fact that she never left home. This journey is one the poem alluded to repeatedly but never dramatized: a journey that happened inside the four walls of her room as she paced the floors, suitors carousing below, son struggling for his manhood, a political situation fraying at the seams and only her fingers holding the threads together. It was a mental journey through painful memory, fearful anticipation of the future, the crawling anxiety and emptiness of the present, a constant vacillation between hope and despair. Her feelings preyed upon her.

But with this simile Homer declares that Penelope’s situation was no mere stagnation. As much as Odysseus’ return rescues her from it, she was not passive inside it. That experience was a drama in its own right, worthy of its own narrative, even if Homer is not the one to tell it. Down in the Underworld, Agamemnon declares that there should be a song about Penelope. Her faithfulness, he says, is what deserves the story.

Homer suggests that the journey that occurred in the confined space of a woman’s house and mind is every bit as much a hero’s journey as her husband’s wanderings and battles. But he suggests, further, that it is not merely the female version. If Odysseus’ experience can illuminate Penelope’s, then hers can illuminate his; her mental and emotional torment, testing, and triumph open up another layer to his experience, one that we might not be aware of otherwise: his fear and doubt, his agonized choices, his pining for home. That night, they both tell each other their stories: circumspect Penelope wraps her mind around her husband’s adventures, thus incorporating them into her own experience; Odysseus, the man of many ways, learns the way of his wife.

Persuasion too suggests that the vision of the world the heroine’s story opens to us is not in fact gendered— though women may in general find it easier to identify or articulate. Even though Anne and Captain Harville playfully pit male and female experiences against each other in their debate, the conclusion they come to really suggests their profound similarity. During the conversation, Captain Harville is driven to describe the internal turmoil the sailor undergoes as he pines for his wife and children and wonders if he will ever see them again. And Captain Wentworth, eavesdropping, of course, on their conversation, is provoked by Anne’s words not just into a declaration of his love but into a defense of his own emotional suffering and faithfulness—as if her words give him the words he has needed: “Dare not say that man forgets sooner than woman, that his love has an earlier death,” he tells her. If her experience has been like his, then his, he insists, has also been like hers; and it is her description of her suffering that enables him to articulate his. He was out in the world and on the ocean; she was trapped in dining rooms and drawing rooms and the four walls of her own mind. But in the end it was their mutual need for each other that drove them, the same faithful love propelling them forward. The experience of the man on the ocean is illuminated and enriched by that of the woman at home—and vice versa. The heroine’s story provides a window into another aspect of what it means to be human, enabling us as readers to inhabit more fully our own humanity.

Leta Sundet is a doctoral candidate in literature in the Institute for Philosophic Studies at the University of Dallas. She received her M.A. in theology and letters from New Saint Andrews College, and also received an M.A. in English literature from the University of Dallas. Her dissertation research explores narrative surprise in the work of Jane Austen, Isak Dinesen, and Flannery O'Connor.