Robert B. Charles was a former Assistant Secretary of State, who received degrees from Dartmouth College, University of Oxford, and Columbia University. Mr. Charles is a friend of the Mangione family, and sent this letter to A.J. Mangione, a student at Highlands Latin School, when he was informed that A.J. had memorized all 70 stanzas of Lord Macaulay’s Horatius at the Bridge. This is an exercise that all sixth grade students at HLS are encouraged to attempt.

I am overdue in providing this congratulations to A.J., a remarkable young man, for having so superbly, nobly, and with strength of conviction and singularity of purpose, first memorized, and then recited publicly, the entire epic poem “Horatius at the Bridge,” by Lord Macaulay. This is no small feat. This is a feat with meaning beyond this day, as Horatius’ own resolve was. I also want to congratulate all who attempted this feat, and particularly those who were able to achieve the complete recitation.

To A.J. first, I offer a great “Congratulations!” You—and any who did it with you—have done a remarkable thing! May it give you enduring confidence in what you can do in the future, and light your way to more remarkable things.

But there is more to this note, since I feel that this challenge itself should be rewarded. What you all have done is so very important. I wonder if you even realize how important this exercise is. You have chosen to highlight, recognize, and reward some timeless truths in this process. You are doing so at a time when these educational truths are everywhere being put to the test, watered down, disparaged and set aside. You have all—A.J., parents, and school—deliberately set the bar high, and without apology. Your school is a standout, since it has dared to put a real challenge in front of kids. And of course A.J., and some of his classmates, dared to step up and to accept it. That—that right there—is the definition of leadership—on both ends of your proposed challenge. So, I just wanted to express how gratifying, encouraging, and uplifting it is to know that somewhere in America this is still happening, that young men and women, boys and girls, are being challenged to look out over the edge of the box, and do something that is genuinely remarkable.

What A.J. has done, and what you all have allowed him to do, is a triumph of far more importance than mere mental concentration. Here is a triumph of the human spirit—of self-discipline, self-reliance, resolve, persistence, and personal commitment—or in a word, heart. These elements define a true leader, not just a true scholar.

Perhaps you know all this, but if so, humor me. I grew up in a little town of 500 people. By good fortune, I attended Dartmouth College, Oxford University in England, and Columbia Law School. Later, I taught at Harvard University’s Extension School. Coming from a family of teachers, I believe in the transformative power of a good education.

When I was a young man in England, I found myself taken with the history of Winston Churchill. Thus, on odd days, I would pedal my bicycle from Oxford up to Blenheim, to see Churchill’s childhood home. I walked the grounds and wondered what his thoughts had been, decades earlier. On other days, I would cycle up and quietly visit Bladen, where this extraordinary leader, a man of unwavering conviction and defender of our Western World—if you will, defender at our own “bridge”—is buried. He is buried simply—not in any grand tomb, not even a big church or churchyard, although he might have been. Instead, he left as he was born, humbly.

This great leader, Winston Churchill, is buried under a thin vertical stone, no bigger than this piece of paper. In that little village, under that little stone, no hoopla, no gates, no guards, lies the man who with so many other brave men and women of heart rose to defend freedom, and to win against the odds in what he called “our finest hour.” So, we all owe him a debt and we repay it, in part, by remembering. And remembering what he did.

Winston Churchill, as a young man, was buffeted by the winds of life. Not all things came easily to him—actually few did. As a young student, one of his leading biographers said, he was of “somewhat doubtful provenance.” He suffered disappointments in family and challenges as a scholar. 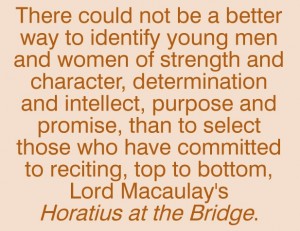 The turning point came when a lower-school English teacher, Robert Somervell, heard young Churchill “flawlessly reciting 1,200 lines of Macaulay’s Lays of Ancient Rome.” Horatius, as you know, is one of the four poems in that work. According to Roy Jenkins, arguably Churchill’s most complete biographer, “for this he gained a prize open to the whole school ….” In this act of tenacity, courage, and sheer will, Churchill demonstrated he was made of tougher stuff, mentally and as a matter of character. Although not gifted in all areas, he left Harrow for the Royal Military Academy, Sandhurst. He proved—as we all know—an exceptional leader and writer. He was accepted, in part, because “his memory was phenomenal, as was shown by the Macaulay feat,” wrote Jenkins.

So how does this feat translate today? I think just as well, maybe better. The need for such concentration of mind and heart is, if anything, greater today. The ability, will, and stick-to-it-ness that leads a student to accomplish this feat is as strong an indicator of future success as any test or challenge of which I can think. Why? Because we live in highly consequential times, and the qualities most needed are again patience and clear-headedness, courage to accept outsized challenges, and the capacity for singlemindedness–that rare concentration of purpose. Most of all, what is needed in this hour—our hour—is genuine heart and follow-through, the willingness to set a high bar and show the integrity to reach for it. What this poem’s recitation does is to pull into a student’s grasp what he did not know was even within his reach. And that is the triumph of heart, not to mention also the triumph of Horatius, of Churchill, of A.J., and those who with him reached toward an impossible goal.

Not so many years ago, I was Colin Powell’s Assistant Secretary of State. I came to that job after working in the White Houses of Ronald Reagan and George Herbert Walker Bush, two exceptional presidents and men, and after serving as Counsel to Speaker Hastert, another American of good heart and a teacher for sixteen years of his life. In Secretary Powell’s service, I was charged with a number of things, among them creating a plan of action and setting up training facilities for hundreds of thousands of Iraqi and Afghan police officers.

The world is an unsettled place, and there were other missions too. We were trying to seed or promote or help others understand an idea often called “rule of law.” One place we also worked was called Kosovo, a place in southern Europe, part of a country that not too long ago was called Yugoslavia.

And here is where the contents of Macaulay’s poem Horatius, the principles that Churchill personified, and the resolve and wit of students like A.J., all come together. What I am about to write has never been printed in the Western press, but it is as true as true can be.

On a moonless night in March 2004, a sudden and terrifying series of events emerged in what we now call “Kosovo.” These events swept the country for more than a day, and they called for great courage. In that place at that time, a few Americans were training the Kosovo police. These young American trainers worked for my group within the State Department. These American trainers were men and women, all civilians and all focused on their mission. They did not expect the events of that long March night to occur.

Kosovo—still newly configured at the time—had a series of small villages, literally fenced-off villages, called “Serbian enclaves.” These villages were filled with churches—and with people. Meantime, the Albanian Kosovar (largely Muslim) populations lived outside these enclaves. And making matters still more complicated, Kosovo was located in a larger Serbian state. So, if you can imagine the situation, Christian villages were contained within a larger Muslim Kosovo, which was itself contained within a still larger former Serbian Christian State. If I have drawn the picture properly, you can see that a tinderbox of raw emotions existed, since all this existed after a war had been fought between these peoples. Two populations that did not like each other were living at close quarters, ironically situated within each other’s territories, like Russian nesting dolls. Although it has gotten better today, you can see how this would be very awkward.

Here is what happened. A conspiracy erupted among the Kosovo Albanians and a nationwide attack began. It spread quickly, unsettling the Serbian enclaves; many Serbian monasteries and churches were suddenly under real attack. And now we come back to those American trainers who worked for me. There was a choice that had to be made. Would the Americans—who were not in the military but were all civilians—get involved, or would they stand back and watch this night of terror go unanswered? The Americans, of whom I am still very proud, decided to get involved.

They gathered and defended the small enclaves. They succeeded in saving many lives that night, young and old. In a critical moment, a set of bridges was involved. An armed mob of thousands was descending on a Kosovo town called Pristina. The American trainers made an educated guess. They believed that this dangerous mob would have to cross a river—on which there was a key bridge. And so they took old cars over to the bridge, and set them ablaze to physically block the bridge. They were not exactly Horatius, but they were heroic and their plan worked. It proved a pivotal and courageous decision. That move stopped the raging mobs, blocked the bridge entirely from passage, and permitted vulnerable people to find refuge and, ultimately, to live. Ironic, is it not, that such a piece of history should so strangely match the distant past? History never actually repeats itself, but it does unfold in patterns and with situations that often resemble each other. How fitting that this one in a sense reflects some of that heroic poem. The spirit of can-do and never-give-up also attended Churchill’s leadership, and even now attaches in a small way to the act of memorizing a long and difficult poem.

So keep thinking big, taking on the big challenges, and exceeding expectations. This challenge and collective achievement—reciting this long and epic poem, as Churchill once did—is exactly the sort of heart and commitment, scholarship and courage, character and resolve that will always define leadership and leaders. I am not on the admission committee of any institution I attended or at which I have taught, but if I were … I would say this: There could not be a better way to identify young men and women of strength and character, determination and intellect, purpose and promise, than to select those who have committed to reciting, top to bottom, Lord Macaulay’s Horatius at the Bridge.

So, well done! Once again, I congratulate A.J. and his classmates, the committed parents, school, and all those involved in this remarkable practice. This must be a remarkable school. My heart is lifted by hearing of all this, and I do think that those who pursue this have something special. What it is will exceed the moment. It reveals a gift that will continue to unfold throughout life. Thank you for letting me in on this achievement, for one and all!