G. K. Chesterton was said never to have produced a masterpiece. The reason is not because he never wrote a great book, but because he wrote so many. But if we had to pick one of Chesterton’s books as his best, it might be Orthodoxy—his case for Christianity. 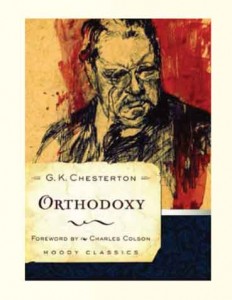 Chesterton became famous in 1904, when he responded to the provocations of Robert Blatchford, the atheist editor of the Clarion (a popular newspaper of the time), who invited his audience to respond to his attacks on religious belief. Chesterton’s four responses are now classics in Christian apologetics and were published in a small out-of-print pamphlet titled “The Religious Doubts of Democracy.” But these little apologetic gems have since come to be known simply as “The Blatchford Controversies.”

He next wrote a book called Heretics, a critique of the great thinkers of the Edwardian England of the first decade of the twentieth century in which he lived. This elicited a challenge from a friend: Now that he had pointed out what was wrong with the beliefs he opposed, wasn’t it time to tell the public what he considered to be the correct view of the world? This is what caused him to write Orthodoxy.

Chesterton begins by describing his own search for truth, in which he managed to construct a worldview that made sense of everything, only to discover, once he had put the finishing touches on it, that it was Christianity.

Chesterton starts his critique of modern worldviews by stipulating that modern thinkers begin their thought by doubting the only Christian doctrine that can be empirically proved: original sin. But, while they reject the idea of sin, what they do accept is the existence of insanity.

Proceeding on this common ground, Chesterton spends the rest of the book showing how every modern philosophy, from materialism to existentialism, displays the unique features of insanity.

The most salient feature of insanity, he points out, is its narrowness. It is the tendency to bring an idea “to one painful point.” It is to consider one idea in isolation from all the rest. It is distortive of reality. Chesterton proceeds to show that what modern thinkers have done is to ransack the wreckage of Christendom and found a school of thought on one part of the wreck.

Materialism, Marxism, and the existentialism of Nietzsche have the same sort of “insane simplicity.” They have “at once the sense of … covering everything and … leaving everything out.” The ideas championed by modern intellectual heresies are not bad in themselves, but only insofar as they are isolated from other truths. “The modern world is full of the old Christian virtues gone mad.”

Even reason itself has been taken by the rationalists, isolated from the imagination and turned into an intellectual madness. Chesterton’s defense of Christianity is also a defense of sanity itself, a sanity that can only be maintained through a Christian worldview.