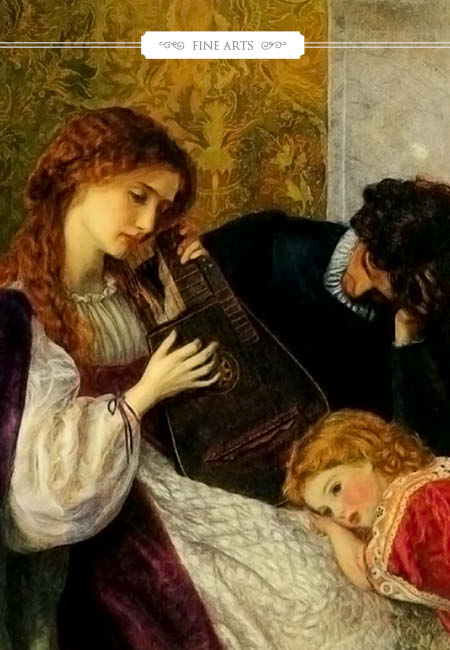 I was recently asked this question at a conference: “What classical music do you recommend I play in the background for my kids?”

Answering it is a bit of a delicate dance because I first need to say that any fruitful approach to classical music needs to place it in the foreground. Any serious art needs to engage the senses. There are of course times when background music can be enjoyable, and maybe even useful, but the amount of extraneous musical sound forced on us daily has conditioned us to view music merely as an accompaniment to something else. (Do we really need music blaring at us when we pump our gas?)

Children today, as well as many parents, dwell in a world of pre-recorded music. Few youngsters routinely encounter live music-making on the back porch, with neighbors bringing over banjos and accordions. Few children are likely to find themselves sitting midhall during a rehearsal of a good wind ensemble, symphonic choir, or orchestra. And even in church, fewer and fewer children experience the vast power of a pipe organ or the vigorous upsweep of traditional hymns sung by a congregation unafraid to sing.

Of course, recorded music provides a wonderful resource for both education and simple enjoyment. And background music seems so “easy” to present, a kind of distraction or automatic atmosphere-creator. But a child’s musicality is not well-served by this ease, at least not without an initial, cognitively active exposure to the music presented.

In our courses at Professor Carol, we offer concrete steps for students of all ages to move from passive to active listening so that they can get the most out of the music they are encountering. This is not to say that music needs to be approached as though a test is waiting in the wings. Certainly not! So let me offer a few suggestions.

First, have a purpose for picking whatever you choose to play. If students are studying King Arthur’s court, it is easy to find recordings of songs from the Middle Ages. Rather than plow through dozens of these admittedly intriguing pieces, pick two or three, and try to offer the child a chance to hear them performed in different ways, by different performers. Just this morning my granddaughter and I spent a little time listening to radically different renditions of a favorite old ballad: “Barbara Allen.” We moved from an old-time string band to a mesmerizing French chanteuse from the 1960s (Marie Laforêt, utterly new to me) to John Denver.

Similarly, children are better served by hearing a single movement of a symphony multiple times—particularly with different orchestras and conductors—than by a drone of symphonic works put on in the background.

Thus, a parent might pick the first movement of Beethoven’s Symphony No. 1 (or perhaps the whole work at just under thirty minutes). Here will be an attractive, easily accessible composition that one can find online to watch or listen to in countless performances. Start with two performances. First, perhaps, a performance filmed from a legendary conductor of the early or mid-twentieth century, likely a bit fuzzy and probably in black and white, but now magically available online. Then turn to a recent, slickly filmed performance, with great cutaways to the players so that kids can match the sounds of the oboe, clarinet, or cello to images of actual musicians.

Next, you could get bolder and listen to a piano version of this same work made by the nineteenth-century virtuoso Franz Liszt, who artfully arranged all nine of Beethoven’s symphonies into virtuosic tapestries for piano. Exposure to just this one unexpected version opens up transformative ideas that notes can take different forms, that the piano offers a completely different listening experience than an orchestra, and that a single player, with the right arrangement, can play through a complex orchestral or operatic work. Indeed, that is precisely what people used to do in their parlors for entertainment. 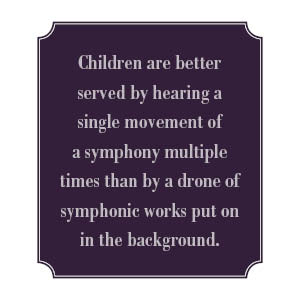 After these steps, particularly if you concentrate on one movement at a time, you will have given your child a sense of this work’s identity and personality. Accordingly, should you then decide to play recorded versions in the “background,” Beethoven’s Symphony No. 1 will have meaning and bear musical and cognitive fruit for your child. Don’t be surprised, for example, if you hear the child humming melodies from it or tapping out its rhythms.

In a similar fashion, much can be gained by playing the soundtracks of dramatic works (musicals, opera, film scores) in the background, so long as the child knows the works already, and particularly if your child has been lucky enough to experience them live in a theater.

And, yes, it is possible to go the other way by creating familiarity with a single song to lead into a new work. So, for example, if you expect that your family will be seeing a performance of The Music Man or Cats or Carmen in the future, then playing the songs (or, better yet, singing through them at the piano or along with a recording) is quite a good idea. But again, this is listening with a purpose.

Finally, even if the music is in the background, please try to have good speakers for delivering decent sound. The repertoire we call “classical” uses the full range of pitches (from high to low) and orchestra colors (string, wind, brass, percussion timbres). These musical elements absolutely require decent speakers or they are lost. Alas, people have accepted the inferior sound of music delivered through the speaker in a laptop or the ubiquitous plastic ear buds. That listening experience is neutral at best, and in many ways deleterious.

Oh, these tinny sounds would annoy the composers who sweated blood and tears to write their music! Their compositions were designed to resonate against the wooden walls of gilded theaters and concert halls, inside acoustically rich salons, or impressively vaulted cathedrals. Old-style speakers can deliver a semblance of this sound.

You can see why answering the original question is a delicate dance. To simply state, “Don’t play music unless you are connecting it or making it a focus!” seems harsh, particularly if your family just enjoys having what we used to call the “classical radio station” going twenty-four seven. And if the modern equivalent of that radio station (“Alexa, play some classical music!”) does delight you and your family, then have at it! But check your children’s eyes occasionally. If they are glazing over (which means their ears have already turned off), then little good is likely to come of it, and it would be good to turn to a more conscious strategy to help them build a musical understanding.