But don’t just take my word for it.

G. K. Chesterton described The Princess and the Goblin as “the book that influenced his whole existence.” C. S. Lewis called MacDonald his master. J. R. R. Tolkien read MacDonald to his children; perhaps it’s not just chance that goblins are ubiquitous in his works.

So what is it about this fairy tale that has garnered such distinguished regard? The answer is simple. It is completely Truthful, completely Beautiful, and completely Good (in every sense of the word). Ursula Le Guin, the author of the introduction in my tattered and marked-up copy, identifies the broad appeal of MacDonald’s book. She says, “He wrote for children, not down to them. He didn’t confuse being young for being simple-minded.” The Princess and the Goblin draws definitive battle lines and offers a wisdom that speaks to the innocent as well as the aged.

MacDonald was stern and clear about what nobility is …. [A] princess is a girl who behaves nobly. Curdie the miner, being brave and kind and behaving nobly and wisely, is a prince. The king is a king because he’s a good man. No other definition is allowed. This is radically moral democracy.

Thus, nobility is a choice that is accessible to all of us. This truth makes The Princess and the Goblin as hopeful as it is harrowing. The book’s heroes, the sun-people, must actively choose to follow literal shining threads that commit them to something higher than themselves. But the lesson is clear that we are all tethered too. Each of us has the freedom to accept our callings and follow our given paths to nobility like the sun-people—or else bury ourselves in darkness and revel in our hard heads and hard hearts like the goblins.

Like the stairs of Princess Irene’s castle home, the choice is up or down; moral middle ground is not allowed. The murky grays so pervasive in modern literature have no place in The Princess and the Goblin. Ascent or descent is illuminated with every comment and decision; small but important differences offer the lines of moral demarcation.

In this well-told tale, MacDonald shows what nobility is by giving us heroes (the sun-people) who are relatable but pure—at once believably similar to us in their struggles, yet authentically superior in their consistency and character. We see them being, not necessarily perfect, but admirably earnest. More than anything, they want to be good. They are sincere and truthful. Their virtue is believable because it stems from humility. Throughout the book, the sun-people are always striving and self-correcting, and so their sentences often begin with the words, “I should have ….” The arrogant and ignoble goblins, by contrast, too often start off with “You should ….”

MacDonald reveals the bad and the deceitful and the ugly in the goblins and their creatures. The goblins hate light, they hate verse, and instead of celebrating the glories of Creation, they believe the upper world “is far too glaring” and must be treated as an “outhouse.” Their values are distorted, just like their tender, toeless feet. They revel in their ability to make their own light and they shun dependence on that “thing hung up in the air” that they believe is “intended no doubt to blind.” 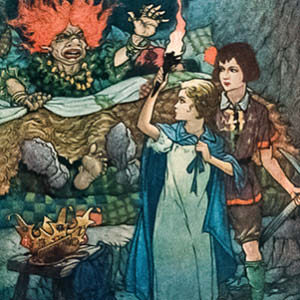 MacDonald’s goblins speak, think, and behave in complete contrast to the sun-people. They consistently run in the wrong direction and their affections are completely upside down. Always seeking autonomy, what they get is isolation. But as MacDonald warns explicitly, it is “foolish indeed … to run farther and farther from all who could help ….” He knew that it is not good for man to be alone. The goblins expose the gloomy consequences of hiding away and rejecting the Sun.

And though the goblins are reviled for their terrible decisions and tarnished souls, we are not allowed to dismiss them. We are told, importantly, that they weren’t always disordered. This makes them pitiable. Once members of the upper world, the goblins chose to sulk and cower in the darkness in pursuit of selfish, shortsighted goals. They were initially led into the ground by a bitter, jealous king, but, increasingly comfortable there, they eventually became creatures who couldn’t stand the light. MacDonald warns us that it was easy for them to acclimate to a life filled with bad words, deeds, and ambitions underground—but he does not allow us to forget that it is not their intended home. We are reminded that, like us, the goblins are never doomed to eternal darkness, but they must look up and climb out of the dirt.

MacDonald shows us what is possible in the sun-people who consistently seek the light. They resist threats against their cherished aboveground culture by seeking help from “above.” Confident in the very-dependable grandmother who lives upstairs, the wise children step out in faith instead of running away from conflict. Without knowing exactly where they’ll be led, they trust the paths revealed by their unbreakable guiding threads. As Vigen Guroian points out in Tending the Heart of Virtue, this “faith fortifies courage.” Ultimately, while defiance destroys the goblins, submission saves the sun-people.

MacDonald’s fairy tale offers clear and simple lessons that pierce the heart and demand reflection. He doesn’t allow ambiguity (or justification) to distract from the truth. He forces us to wonder plainly, “Am I a princess or a goblin?”

It doesn’t matter if you are ten or fifty, The Princess and the Goblin will guide you toward nobility. It exalts eternal truths about the human experience and speaks to every age in every age.