When you ask a fellow teacher or homeschool parent what classical education is, you’re likely to get a different answer every time. To one person it is the study of history chronologically, to another it is simply a challenging academic curriculum. To many, particularly in recent decades, classical education is seen as the application of Dorothy Sayers’ developmental model—the grammar, logic, and rhetoric stages of learning.

He relates the story of attending a meeting of classical educators at which a pastor in the audience asked, “At my school we use Saxon Math and Writing Road to Reading. What else do we need to be classical?”

It was inquirers like these that Tracy Lee Simmons must have had in mind when he pointed out, “We apply ‘classic’ or ‘classical’ to anything we believe to be excellent or universal.” (2) But is that all it is?

One of the first things to do when you are looking for what a term means is to look at how it was used historically. What was the original meaning of the term “classical education”?

Until recently, classical education meant only one thing: The “older definition of classical education,” said Simmons, was “a curriculum grounded upon—if not strictly limited to—Greek, Latin, and the study of the civilization from which they arose.”

If you reread the debates that took place in the early twentieth century, when classical education was under attack by the progressives, it was the teaching of Latin and Greek, and whether these two languages were still important in the modern world, that was the central flash-point of the debate.

The chief argument of the progressives was that the classical languages were outdated. The use of these languages to read the classics was simply unnecessary, they argued, given the wide availability of English translations. But classical educators knew that these arguments assumed a narrow view of the benefits of classical languages. This is why, when classical educators met at Princeton College in 1917 to try to regroup their forces in the face of the progressive onslaught, they chose to take their stand on the benefits of Latin. Two books which eloquently communicate the enormous benefits of the study of the classical languages are R. W. Livingstone’s A Defense of Classical Education (1917) and Charles Bennett’s The Teaching of Latin and Greek in Secondary Schools (1900).

In fact, it was these benefits of Latin that were a centerpiece in the document that rebooted classical education in the late 1980s—Dorothy Sayers’ essay “The Lost Tools of Learning.” That essay and the book Recovering the Lost Tools of Learning, by Douglas Wilson, together spawned the modern classical education movement that is even now asking what it is and what it is for.

And those who consider Sayers’ stages of learning as the thing that makes an education classical would do well to heed her advice as to how to conduct the first of these stages:

Let us begin, then, with Grammar. This, in practice, means the grammar of some language in particular; and it must be an inflected language. The grammatical structure of an uninflected language is far too analytical to be tackled by any one without previous practice in Dialectic. Moreover, the inflected languages interpret the uninflected, whereas the uninflected are of little use in interpreting the inflected. I will say at once, quite firmly, that the best grounding for education is the Latin grammar. I say this, not because Latin is traditional and medieval, but simply because even a rudimentary knowledge of Latin cuts down the labor and pains of learning almost any other subject by at least fifty percent. It is the key to the vocabulary and structure of all the Teutonic languages, as well as to the technical vocabulary of all the sciences and to the literature of the entire Mediterranean civilization, together with all its historical documents. [Emphasis added]

In other words, in order to gain a competent grasp of grammar, one needs to study a language other than English, since English is uninflected and therefore too analytical and abstract. Second, because it is an inflected language, Latin is the best language to use because it makes the study of grammar concrete and because of the historic ties of Latin to our own language and culture.

The advantages of Latin in terms of vocabulary and grammar have been solidly established and widely extolled—by Sayers and others. But it is the ability of Latin to teach students how to think that is the most underrated of its benefits. A grammar-based Latin study is not simply a grammatical study, but an exercise in what modern educators like to call “critical thinking skills.” 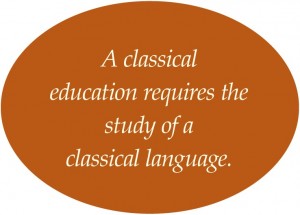 “The hard, precipitous path of classical education,” said Simmons, “ideally led not to knowledge alone, but to the cultivation of mind and spirit.” Writing to some friends about the education of his daughter, the Victorian essayist John Ruskin observed about the inflected Greek grammar what we can also say about the Latin: “To have learned one Greek verb accurately will make a difference in her habits of thought for ever after.”

Kopff, too, sees the fundamental intellectual advantages of a classical education based on the classical languages: “A curriculum does not aim at producing experts in each subject studied, but encouraging students to think critically and respond creatively in many areas, including topics not formally studied.”

Comparison and contrast are the two basic thinking skills, and the Latin grammar is full of them. “It need not be pointed out,” says Livingstone, “that the study of a language like this is a good mental discipline, an exercise in precise expression, in correct dissection of thought.” There is no better critical thinking skills program than Latin.

The classical languages, in short, have a value far beyond their use in reading great books. The classical scholar Eva Brann relates a favorite story her father (who was educated in a German classical gymnasium) told about his Greek professor. The professor was saddened that one of his students was being taken out of school for a business apprenticeship. “What a pity he couldn’t stay for the irregular verbs!” he said. “One more month and he’d have had something to sustain him in life.”

In commenting on the increasing interest among private and home educators in classical education, Simmons expresses his sympathy with them, but with a caveat: “I will only say to all these good people that extending ‘classical’ to mark an approach or course of study without reference to Greek and Latin seems an unnecessarily promiscuous usage.”

(1) E. Christian Kopff is the author of The Devil Knows Latin. He is Associate Director of the Honors Program of the University of Colorado, Boulder.
(2) Tracy Lee Simmons, Oxford University graduate in classics, author of Climbing Parnassus: A New Apologia for Greek and Latin.

One thought on “Why Latin Is NOT Optional”