Imagine an arrow shot into the air, and high in flight, it bursts into flame. How cool would that be?! If you saw this spectacle, you would probably deem it a wonder, or perhaps a symbol or sign. This is how Aeneas and the Trojan remnant (traveling with him after the fall of Troy) responded when they saw this marvel. Now if you haven’t read the Aeneid, do not worry. My purpose here is to bring you in to the story—to offer a brief glimpse of its exciting action, stunning beauty, and profound symbolism. And afterwards, perhaps you’ll dust off your copy of Virgil and begin to read again. 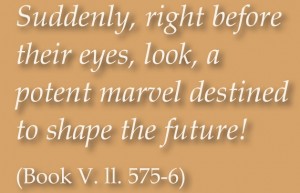 For such an endeavor, we need to descend from the heights of the whole text upon an acre of land in the Aeneid. Like Milton in Paradise Lost, Book 7, summoning his poetic muse Urania to “return me to my native element” so he can “sing more safely with mortal voice … standing on earth,” so we too will land on a small tract in the Aeneid and study it up close: Book 5—”The Funeral Games for Anchises” (Aeneas’s father).

Initially, it may be tempting to give Book 5 a cursory read, to see it as a mere resting place between two larger, more dramatic episodes—Dido’s tragic death on a burning pyre in Book 4, and Aeneas’s visit to the underworld in Book 6. But a closer look at Book 5 yields a surprisingly rich, symbolic interpretation. First, the funeral games can be viewed as a symbol of Roman history—its formation and empiric destiny; and second, as a metaphor for how the great text of the Aeneid can nourish our children in a classical education.

Let us begin by jumping on the ship with Aeneas, who is “steeled for a mid-sea passage,” looking back at the burning pyre, splitting the waves under a dark, ominous sky, searching for his destiny. But far out in the high seas, the ship is beset by thunderstorms, compelling Aeneas to wait out the storm at Sicily, the resting place of his father’s bones.

In Sicily, Aeneas will commemorate his father, Anchises (who died there one year ago), with two important events: ceremonial rites at his tomb and funeral (athletic) games. As Aeneas announces his plan for the commemoration, he makes a three-fold connection between his father’s bones, the plan of the gods, and a future city:

… here we stand
by the very bones and ashes of my father—not,
I know, without the plan and power of the gods—
borne by the seas we’ve reached this friendly haven.
So come, all of us celebrate our happy buoyant rites!
Pray for fair winds! And may it please my father,
once my city is built with temples in his name,
that I offer him these rites year in, year out (5.67-74).

This three-fold connection suggests that the funeral rites are not only important, but symbolic, indicative of destiny and the formation of a nation.

The initiation of the ceremonial rites at Anchises’ tomb also contains key symbolic elements. Aeneas ascends the tomb to pour libations in honor of his father. Aeneas’s son, Ascanius, and other young men follow suit (5.90). Here, in this funereal space, are three paternal generations of Roman identity and formation: Anchises, in the tomb, represents the Trojan past; Aeneas, atop the tomb, represents the present and vital link between the past and the future; and Ascanius, approaching the tomb with the other young men, represents the Roman future. In this sacred moment Aeneas says,

Hail, my blessed father, hail again! I salute
your ashes, your spirit and your shade …
… Not with you
would it be my fate to search for Italy’s shores
and destined fields (5.97-101).

The fact that Virgil frames the history and future of the Roman race in the context of religious rite suggests the sacred calling and destiny of the Roman people—they are born from unmixed wine, fresh milk, and hallowed blood (5.95)—a race chosen by the gods and destined for greatness.

So what is the role of the Aeneid in classical education? Perhaps reading the Aeneid is a kind of liturgical calling, born from the sacred education of the past, necessary and essential for our children’s literary formation. To understand this, let us return for a moment to the picture of Aeneas ascending the tomb to pour libations. In this scene we find an unexpected crisis, an arresting image that activates students’ thoughts and piques their interest in symbol and allusion: 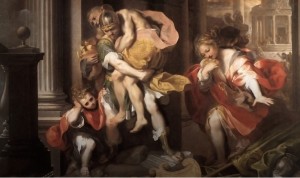 As Aeneas finishes his eulogistic words, “a serpent slithered up from the shrine’s depths, / drawing its seven huge coils … calmly enfolding the tomb, gliding through the altars” (5.104-106). Aeneas stops, struck by the sight. “The snake slowly sweeping / along his length among the bowls and polished goblets / tasted the feast, then back he slid below the tomb” (5.108-111).

Why does Virgil inhabit this sacred scene with a snake? Is the snake, as Aeneas asks, “the genius of the place or his father’s familiar spirit?” Or does the snake foreshadow something disturbing about the future Roman state—perhaps the entangled cost of empire? The inherent complexity and allusive nature of the Aeneid is why it remains a valuable read for those pursuing a classical education. Its multiple layers engender literal and analogous reading, thinking, and discovery.

Following this scene, the funeral games begin. When the ship race gets underway, it too can be seen as symbolic: The Trojans are “off to the races”—racing for Roman identity (in the text) and empire (in real life). And this, I think, was Virgil’s intent; he was writing as much for his Roman countrymen as he was for Augustus. One purpose for his epic was to write a nation into being, to form, from the power of verse, a country with purpose and design, myth and history.

Do you recall the image of the arrow bursting into flame? This prophetic sign happens during the archery contest. Acestes raises his bow and launches an arrow high into the air. Right before the citizens’ eyes, the arrow turns to flame and blazes out in fire:

… look, a potent marvel
destined to shape the future! So the outcome proved
when the awestruck prophets sang the signs to later ages.
(5.575-77)

The Trojans froze and prayed. Aeneas identifies this as an omen, the flaming arrow here a symbol of expectation and destiny.

Finally, but perhaps most importantly, the games peak with the arrival of the last event, the equestrian games. Ascanius and the young men ride in on horses, “trim in their ranks before their parents’ eyes” (5.607). As they parade by, the onlookers “murmur a hum of admiration” (5.611). For the Trojan remnant, the young men reflect the potential and hope for a new nation, a new people. After all, the equestrian games are mock displays of war—the very activity from which nations and empires are born.

I cannot help but think of our children, “trim in their ranks” before us, formed and ordered by the great education—a remnant of hope for the preservation of Western civilization.

I cannot help but think of our children, standing on the Aeneid, becoming before our eyes high-whipped arrows blazing into flames—”potent marvels destined to shape the future!” 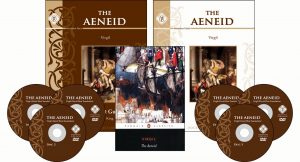 0 thoughts on “The Flaming Arrow of Classical Education: The Funeral Games in the Aeneid as a Symbol and Hope”