Jon Young is the Sherlock Holmes of the backyard. By watching birds through a window he can anticipate that a cat will appear. He knows that birds react one way to a slithering snake and another to a skulking weasel. And he can distinguish among a half-dozen purposes for a bird’s call thanks to his knowledge of what he calls “bird language.” His best-seller What the Robin Knows is a compelling case that we can become habitually aware of many kinds of biological interactions by attending to the subtle cues offered by the motions and signals of birds.

Young’s book is one of a flock of recent volumes exploring the cognitive lives of animals. As the number of biologists has grown exponentially in recent decades, and their tools for observing, recording, and analyzing the activities of animals have improved, so has popular fascination with the subject. There are good reasons to rejoice in this renaissance of natural history, not least the one Young celebrates, which is that it is an observational science. If we are to make gains in understanding animals, then we must dedicate ourselves to the labor of seeing and hearing them, which will require us to put down our phones and to hone our senses. Young rightly attests that the “additional skills and perceptions” required of the naturalist can help to “keep us from sinking into a state of focused self-absorption.” He missteps, however, when he goes on to say that this kind of skilled seeing and hearing keeps us “as alive as we’re ever going to be,” as though keen sensing were the height of human excellence.

The new literature of natural history has something of a tragic flaw: It often exaggerates the intelligence of animals and consequently minimizes the nobility of human beings. A characteristic example of this fault is found in Jennifer Ackerman’s The Genius of Birds. Writing in a Darwinian vein, she equates intelligence with the ability to survive, notes the worldwide profusion of birds and the fact that they outnumber us by over thirty to one, and then asserts: “To say that humans are more successful or advanced really depends on how you define those terms.” But this is to pay in bad coin. When she closes her book with expressions of gratitude, Ackerman thanks men and women, and one above all others, noting her debt to various qualities he possesses, among which figure “wisdom” and “humor.” These are attributes we are not even remotely inclined to ascribe to a dog or parrot.

Our confidence in the unique dignity of human beings should not be shaken by any enumeration of what Ackerman calls the “sophisticated cognitive abilities” of birds or of any other animal. When Jesus said, “you are of more value than many sparrows” (Matthew 10:31), He gave divine confirmation of something everybody knows, even if some will persist in denying it in speech. Attending to what the Robin doesn’t know can help us to be confident in our conviction that we are different and of a higher order than animals.

The first thing that the Robin doesn’t know is that it is a Robin. Animals do have an impressive cognitive awareness of their world. They are provided with instincts that allow them to respond well to threats and to possible gains, such as sources of food. That awareness even extends to the recognition of different kinds of things as presenting those threats or gains, as Young’s example of the wren reacting one way to the snake and another way to the weasel confirms. But instinctual awareness is one thing, and knowledge another.

When we come to know what a thing is, we gain possession of something that transcends our sensory interaction with the world. Consider the question, “What is a bird?” Merely to ask and to answer this question is to take flight into the world of universal ideas, concepts that have a certain perch in our sensory interaction with the world but at the same time are essentially aloft in the realm of “thinking.” 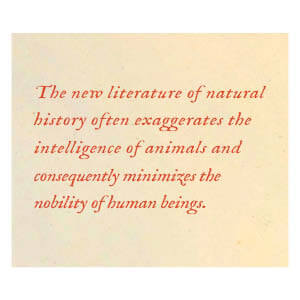 For a simple proof of this point, close your eyes and picture to yourself a bird. To picture a bird in your mind is simply a recollection of past sensory interactions. Because you have seen many kinds of birds, you may even specifically picture a penguin, an ostrich, or a cardinal. But considering the universal idea of what a bird is moves beyond that. You can picture a bird of a specific shape and color and size, but the concept of “bird,” what it means to be a bird (encompassing all birds of all shapes and sizes and colors), is beyond the function of sensory interaction with the world. It requires you to think. Whenever we think, we operate not merely at the level of the senses but cross the threshold into the kingdom of truth.

The sense of humor that Jennifer Ackerman attributes to her friend is another sign of the existence of that threshold. To find something humorous is to be struck by an incongruity. It is our ability to recognize the incongruous that Geico and other companies rely on to sell us what are otherwise entirely unhumorous things. But to recognize incongruity we must first be in contact with what is real and normal. That is, we must know at the level of universal ideas. There is something charming about Geico’s mascot, the talking gecko lizard, precisely because we know that “lizard” and “speech” are two concepts that don’t go together.

And that takes us to the second thing that the Robin doesn’t know: contradiction. We human beings are sensitive to few things as much as contradiction. We don’t even like being told that we are wrong about something entirely trivial, like the name of the last World Series MVP.

“It was Anthony Rendon.”
“No, it wasn’t. It was Stephen Strasburg.”
“No, it was Rendon—he hit that home run in game seven.”

And so on, with tempers flaring until at last someone appeals to Google. We especially don’t like the kind of contradiction that is involved in someone saying one thing and doing the opposite. The limit case of such behavior is the intentional lie: Someone says, “I love you” but then does “I don’t love you.” Nothing cuts so deeply into a human life as that. But no Robin is troubled by being lied to, because it doesn’t know that it has been. No, Robins are troubled by things like ice storms, weasels, and cats.

The third thing that a Robin doesn’t know is what Ackerman captured by praising her friend for his wisdom. We human beings do have instincts, but if we follow them unreflectively we generally end up in a ditch. Unlike the Robin, we must not only learn to thrive in the physical world of survival, but also to navigate the kingdom of truth. To be sure, we must acquire many skills that are closely tied to our five senses, as, for instance, the various skills involved in housekeeping and husbandry. Yet the most important quality for us to attain is surely that of the ability to treat with our fellow human beings through speech in such a way that we come to shared convictions about courses of action that we need to take together. Sometimes those convictions are framed by one party and merely understood and complied with by others, as when a coach gives a set of instructions to a team. Often, however, such convictions are arrived at by conversation and result in a free agreement to pursue a common goal. This ability to deliberate effectively and thus reliably to attain the things of which we stand in need, especially friendship, is a large part of what we mean by wisdom. And Robins neither have it nor need it. They are as “alive as they are ever going to be,” to return to Young’s formulation, by the exercise of their impressive instincts. But if we are to be fully alive, we must recognize that our lives unfold in the kingdom of truth.

Christopher O. Blum is Professor of History & Philosophy and Academic Dean of the Augustine Institute. He is the editor and translator of St. Francis de Sales' The Sign of the Cross: The Fifteen Most Powerful Words in the English Language (Sophia Press).