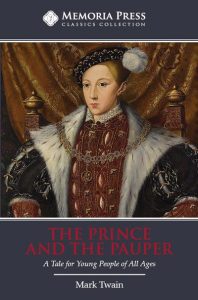 The Prince and the Pauper is a long-ago case of mistaken identity set in Britain’s glorious crown London, in what we in nowadays-America would call the suburbs. A poor boy (Tom Canty) and a rich boy (Prince Edward Tudor) exchange garments and lives for what they think will be a few vain, fleeting hours that instead turn into weeks! The pauper becomes real royalty, with even the king calling him “son” and “prince,” whilst the true prince endures the horrible, crusty life of a pauper in England.

In time and with help, the prince returns to claim his real position of king and the ragged “mock king” Tom becomes royalty in the eyes of the true king and family and public, who now view him with respect.

*This book will be included in the Simply Classical Levels 9&10 Read-Aloud Set.

Michelle Swope was born in 1995 with her twin brother, Michael. She enjoys reading, listening to music, and playing with her cat Silky. Despite having schizophrenia, autism, and learning disabilities, Michelle graduated from her classical homeschool in 2013 and has since written two books of fireside poetry, Through Time’s Looking Glass and her most recent release, God’s Harvest.