THE KEY TO THE ENGLISH LANGUAGE

The most practical reason for Latin study is that it also teaches English. Over half of our English words are derived from Latin—and it’s not just any half, it’s the difficult half! The common one- and two-syllable words of everyday speech are English, but the big, three- to five-syllable words are usually from Latin. These are the words students start to see in their reading in science, history, and literature beginning in the third and fourth grades.

Let’s say Johnny has worked hard, learned phonics, and can read and spell the word “father.” Is he now prepared to decode the meanings of all of the words he will encounter that come from the Latin word for father (pater, patris)? How will he learn the spelling, pronunciation, and meanings of words such as patriarch, patriarchy, paternal, paternalistic, patron, patronize, paternity, patrimony, etc.?

Without Latin, he will probably learn these words mostly on his own, in a hit-or-miss fashion. Most students never really develop a masterful command of the English language because they are not taught the English language in a systematic way after leaving phonics. They do not develop the vocabulary necessary to read well in their own language because they are not given the tools to attack the incredibly large number of English words.

The advantage of beginning Latin in the third or fourth grade is that we give our students the tools to decode these big words just when they begin to encounter them, instead of five years later. I have noticed that young students love to learn big words, even if they won’t use them often. I teach them words such as “ludicrous” (ridiculous, silly), which comes from the Latin ludus (game). Even though this is a word they may not encounter immediately, they enjoy saying it and knowing what it means.

Students begin to see Latin roots in words everywhere and tell their parents about the new words they encounter and where they come from. Parents are thrilled and students develop confidence. Students are being given a valuable tool: Latin—the key that opens up the door to the English language. Students need this key while they are still young enough to be excited about words, and while they are rapidly developing vocabulary through their new skill of reading.

Another reason to begin Latin in third grade is that students at this age still find memorization an enjoyable task—something not usually true of students in high school. Much of the vocabulary and the grammar forms of Latin can be learned in third through sixth grades.

Okay, so Latin is good for vocabulary development. Why not just study a hundred Latin and Greek roots and be done with it? Wouldn’t that be a lot quicker and more efficient than studying all that grammar, those awful declensions and conjugations that go on forever? No, because there are more reasons to study Latin than just developing vocabulary and getting higher SAT scores. One is contained in the expression “all that grammar.” All that grammar is exactly what students get in Latin that they don’t get in French or Spanish. 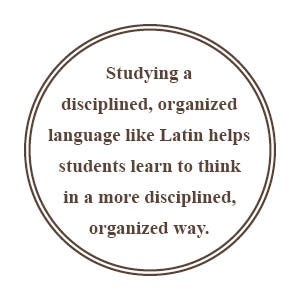 Why do we even care about grammar anyway? To really understand the structure of language (and that’s what grammar is), students must study a structured language. In Latin, grammar is the organizing principle rather than a vestige as it is in most modern languages. Students whose understanding of English grammar comes from a study of Latin grammar develop an understanding of language far superior to anything that can be achieved by the study of modern languages alone.

Most parents I know are really concerned about the poor writing skills of their children and have an uneasy feeling that the muddled writing of their children is evidence of muddled thinking. Studying a disciplined, organized language like Latin helps students learn to think in a more disciplined, organized way. The very nature of the language affects the way students think and write.

Homeschoolers today have a lot of interest in Unit Studies. There are a few reasons for this. One is lack of retention. Textbooks often present students with mountains of unrelated information year after year, producing precious little retention and much forgetting. Have you ever taught what you thought was the greatest lesson ever, only to realize three months later that your children swear they have never heard of the subject? How dare they forget what you were sure they would remember forever!

Another reason is the frustration with the proliferation of curriculum. So much to learn, so many books, so many programs, so little time. How do you pull all of this knowledge together and consolidate?

A third reason is fragmentation. If we could only make more connections between all of the various fields of knowledge, there would be more meaning in our children’s education, and less learning for the short term.

As my children went through their elementary years, I felt that there was something missing. There was no subject rigorous and challenging enough to train and discipline their minds, and there was no focus that helped pull everything else together.

I experimented with teaching them Latin and, although I did not have the materials I needed for their age, I found that I had finally discovered the subject that was my heart’s desire. My background was in math and science, but I fell in love with Latin. The more I worked with Latin the more I realized it was an educator’s dream.

Latin is the mother tongue of Western civilization. Because it has been the language that has transmitted our cultural heritage for over two thousand years, it pulls together language arts, history, geography, culture, art, architecture, music, values, religion, government, science, and math. Everything in the modern world seems to be related to Latin and the ancient and medieval cultures that spoke it. By examining the roots of our culture in its mother language, knowledge begins to integrate itself naturally.

The best way to put it is this: Latin is a Unit Study where the work is done for you.

Latin is the Basic Subject because it is the Basic Language; therefore, the way to really get back to the basics is to study Latin. This will be a new concept to many parents, but a school looking for a way to integrate and simplify its curriculum—or a homeschooling mother struggling to integrate and simplify her life—will find in the study of Latin not just a language but an organizing principle that could revolutionize their schools and homeschools.