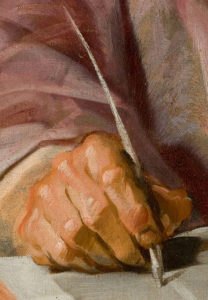 In Ernest Hemingway’s book A Moveable Feast, he gives the best advice I have ever read on dealing with writer’s block. He tells you to sit down, take up a pen, and write one true sentence. That’s it. Just one true sentence.

For example, I had writer’s block as I sat down to write this article. I have written probably hundreds of articles like this one, articles taking one truth about classical education and expounding on it for about seven hundred words, but I couldn’t think of anything to write about now. So I wrote a sentence that was true, and I was off to the races.

Take graduation speeches, for example. I have attended quite a number of graduation addresses and I have a hard time remembering any that really said much worth saying about the education the student listeners presumably received. It is in these speeches and in other chatter from the educational establishment that we hear a blizzard of slogans and catchphrases that betray a lot of enthusiasm but very little substance. We hear talk about “child-centered learning,” but education is not the development of a child. Rather, it is the formation of an adult. Before 2000 rolled around we heard talk about “building a bridge to the twenty-first century,” when, as it pertains to education, we would have gotten better results building a bridge to the nineteenth. And “no child left behind”? Do we really believe any program or practice will do that?

Likewise, all the education prattle about “research.” Research in general—even in the hard sciences—can be unreliable and misleading, as Richard Harris points out in his book Rigor Mortis: How Sloppy Science Creates Worthless Cures, Crushes Hope, and Wastes Billions. But in education the research is especially terrible. In a meta-study done by two researchers from Duke University and the University of Connecticut, they found that only 0.13 percent of education research has been replicated (a basic measurement of competent research).

What if we said: Education is the cultivation of wisdom and virtue through the study of the True, the Good, and the Beautiful, in order to develop fully formed human beings.

Hemingway doesn’t tell us to end with one true sentence. But there it is.