One of the most noticeable tendencies in modern education is an aversion to the word “knowledge.”

Why is this? Why is the one word you would expect to be at the center of the education enterprise the one word that so many modern educators find distasteful?

Anyone who has taken the time to read the documents that guide our nation’s educational policy finds this tendency hard to miss. In my own state of Kentucky, several years ago policymakers decided they were going to reform the state’s school system. In looking for something new, they reached for all the trendy educational fads that happened to be making the rounds at that particular time (the early 1990s). And in trying to find the newest and most cutting-edge educational practices, they did what education reformers in this country always do: They implemented the same shopworn “progressive” ideas that have repeatedly failed to educate children.

No one ever mistook Kentucky for a leader in education innovation. In fact, it has consistently competed with a few other states for last place in most measures of educational achievement. Kentucky’s reforms of the 1990s, it turns out, didn’t help its reputation. Despite the largest tax increase in the state’s history and a reform law that turned the state’s schools upside down, Kentucky’s public education still languishes near the bottom on many state-by-state comparisons.

When the program was implemented, it didn’t take long to figure out what was happening: vague, meaningless education standards; permissive approaches to classroom management; an underlying philosophy that rejected common-sense notions about truth and human nature; and a redirection of attention away from academic concerns toward broader social concerns that had nothing to do with education.

But the first thing I noticed about these supposedly progressive reforms was the lengths to which education reformers were willing to go to avoid having to say that word “knowledge.” The word was almost completely absent from the documents that were guiding educators.

I once sat on a committee that was responsible for offering recommendations on school family life education, and, after months of reviewing materials designed to teach students how to make decisions about sexual activity, drugs, etc., I remarked to the committee that it was significant that the word “conscience” was so studiously avoided in all of the materials. This became especially obvious after some newer materials began to tell the students to consult their “inner guides.” The word “conscience” connotes the idea of a real right and wrong outside of the person, regardless of what his “inner guide” may tell him. 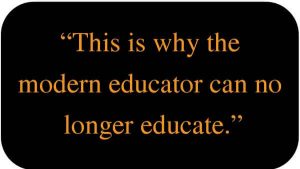 Western civilization was built upon the Christian and Aristotelian concept of knowledge as real and objective, and the classical model of education which predominated in American schools until the early twentieth century was based on it. When modern philosophers in the eighteenth and nineteenth centuries began to reject the existence of God, they were forced to search for a modern basis for knowledge. But the skepticism about the existence of God quickly led to a similar skepticism about the reality of knowledge itself. The only true knowledge, it was decided, is math and “scientific facts.” Everything else is mere opinion and not worthy of the designation knowledge or truth. The eighteenth-century philosopher David Hume stated this view in its purest form:

Ironically, the book in which he said this, The Enquiry Concerning Human Understanding, was itself neither a mathematical nor a scientific book, but a book of philosophy and, therefore, by Hume’s own criterion, should have been “committed to the flames.”

Immanuel Kant later set about to rescue knowledge from this reductionist view, but he ended up completely destroying it. He eliminated Hume’s distinction between true knowledge (science) and everything else, but it was a Phyrric victory because he essentially said that not even math and science are ultimately knowable. Kant said that man can only understand reality through the innate structure of his own mind; man is trapped in his own mind, incapable of really knowing truth.

This is the source of the modern educator’s problem with the word “knowledge”: The only thing man can really know is his own mind; therefore, the only thing our students can really know is themselves. According to Kant, all knowledge is subjective, not just values and morals. Each individual has his own unique experiences, constructs his own meaning, lives in his own world. This is the reason that it is the process of learning that is important, not the content, which is why educators emphasize learning by experience.

In their book Education and the Nature of Man, Earl Kelley and Marie Rasey express the modern view succinctly:

Knowledge, then, is what we know … It is subjective in nature and unique to the learner. It does not exist before learning begins, or if it does, that fact does not really matter. It is the result of process and is subject to continuous modification.

This is why children are now asked to “construct meaning” rather than simply “read and comprehend.”

Diane Ravitch writes of how this approach to the curriculum became evident in American education as early as 1910, when figures such as John Dewey openly questioned the old classical model and began promoting a new progressive philosophy in colleges and schools. College schools of education, which to this day are the origin of much educational mischief, began sending experts out to schools, preaching the new doctrines and undermining the classical curricula. This was called “the curriculum revision movement,” says Ravitch, and the impression that emerges, she says, is a pronounced shift in the stated goals of schooling, away from a concern with intellectual development and mastery of subject matter to concern for social and emotional development and the adoption of “functional” objectives related to areas such as vocation, health, and family life. Generally, the revised curriculum was … a conscious attempt to denigrate the traditional notion of “knowledge for its own sake” as useless and possibly worthless.

It is ironic that when man began the modern adventure of constructing a world without God, he thought he could know everything. He has ended up deciding he can know nothing. As G. K. Chesterton put in his book Orthodoxy:

And in the act of destroying the idea of Divine authority we have largely destroyed the idea of that human authority by which we do a long-division sum. With a long and sustained tug we have attempted to pull the mitre off pontifical man; and his head has come off with it.

As Diane Ravitch has pointed out so eloquently in her book The Troubled Crusade: American Education, 1945-1980, the reform efforts based on the modern view of knowledge have produced nothing but a litany of failure. If the education establishment attempted to return to earlier assumptions about truth and the classical model of education that was based on it, they would be accused of “turning back the clock.” The real truth is that they would be coming home—to common sense and sanity.