What does Classical education mean today? We find that, in an uninstructed age, the old regimen needs not only defending but also defining. Once classical education pointed to an elite course of instruction based upon Greek and Latin, the two great languages of the classical world. But it also delved into the history, philosophy, literature, and the art of the Greek and Roman worlds, affording over time to the more perspicacious devotees a remarkably high degree of cultural understanding, an understanding that endured and marked the learner for life. 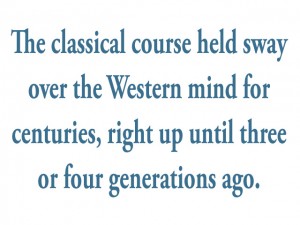 Classical education was classical immersion. Students in the great and exclusive Public Schools of England were once made to learn far more about the archons of Greek city-states and emperors of Rome, and commit to memory far more lines of Greek and Roman poetry and drama, than they ever had to learn about Tudors and Stuarts, about Chaucer and Shakespeare. But the languages never took second seat: mastering them came first, and doing so became the crowning achievement of a classical education. Why? Because knowledge and information were not quite enough.

Classical education did not set itself to instilling knowledge alone; it also sought to polish and refine. And neither rigor nor beauty in one’s use of language were obtained firmly without Greek and Latin. Together they provided both a mental gymnastic and a training in taste.

Today we use the term licentiously. We apply “classic” or “classical” to anything we believe to be excellent and universal. Once I was asked my field of study. “Classics,” I replied. To which my interlocutor responded, “Oh, you mean Dickens, Melville, and all that?”—a response common and understandable now. Sic semper verbis. Also, the field of classics, while still signifying the old meaning (Greek and Latin) to most of the intellectually inclined, has been extended to embrace a study of the classical world innocent of the languages, a sense we readily recognize in university course catalogues as “Classical Civ.” and “Classical Literature,” both customarily indicating (often fine) courses of reading in translation.

Thus nowadays may classical education refer to something not linked to the classical world at all and get equated with what might once have been simply called traditional or orthodox education. This is schooling based on “classics,” on books of the Great Tradition, an education that serves to inform us of the best works of our civilization and to provide us with models for spotting ethical and aesthetic norms. These two functions the valuable “Great Books” programs try to perform. Used in this way, classical education describes the quest for what has also been called a “liberal education” or, more particularly, an education in the “humanities.” And now legions of well-intending homeschoolers rush to put dibs on the term and bask in the light of the glory they believe it to exude. To many homeschoolers, “classical education” simply means the opposite of whatever is going on in those dreaded public schools. We can sympathize with them. I will only say to all these good people that extending “classical” to mark an approach or course of study without reference to Greek and Latin seems an unnecessarily promiscuous usage. But I am afraid we’re stuck with it.

Here I trust the reader will allow me the archaism of reverting to the older definition of classical education as a curriculum grounded upon—if not strictly limited to—Greek, Latin, and the study of the civilization from which they arose. For though my allies have appropriated the term for good purposes, I can find no other that carries the weight of classical study as does “classics,” the pursuit of which results, if we’re lucky, in a “classical education.” To use any other term would also break my rule of respecting the past, not to mention causing a semantic severance with generations of men and women who used the term quite differently and, I think, more accurately. I’ll stick to the antique ways.

Mount Parnassus, a limestone mass hovering over the ancient shrine of Delphi, has stood as a prime symbol of poetic inspiration and perfection since the dawn of the West. It fixed anxious eyes on the heavens. The Castalian spring, being a sacred source of life-sustaining water, trickled far below. The hushed tones of ritual echoed from its slopes. But over time it came to embody those things which man, at his best, wishes—and ought to wish—to achieve. It became a sign of his better, divinely inspired self. While representing the unattainable for most pilgrims, Parnassus also pointed to those treasures bestowed by the muses upon the faithful and diligent ones who wait and work. “Climbing Parnassus” eventually became a code for the painfully glorious exertions of Greek and Latin.

The hard, precipitous path of classical education ideally led not to knowledge alone, but to the cultivation of mind and spirit. Knowledge did not, in and of itself, justify the sweat. The climb was meant to transform one’s intellectual and aesthetic nature as well. The classical course held sway over the Western mind for centuries, right up until three or four generations ago. Much of our intellectual history from the Dark Ages, through the Renaissance, and on to the modern world witnessed the assiduous spadework of clerics and lay scholars alike reaching back to the ancient world to retrieve, preserve, and propagate the wealth of learning and experience it held. And the classical languages enshrining that wealth had to be taught. Thus a classical education was the queen of all scholastic endeavors; it constituted the original humanities curriculum. Whatever hodgepodge of diverse and disconnected topics humanistic studies have become—their emaciated children now simply called “the humanities”—they were once, first and last, a prolonged inquiry into Greek and Roman achievements in literature, history, thought, and art. That path is still a valid one to tread.

Yet this too we must admit all these centuries later. Classical claims, while bolstered to tradition and intellectual coherence alike, cannot be advanced with proof. They are not the stuff of Venn diagrams. We cannot cash them at the bank. A classical education is different in kind to the training of a technician, where the trained man demonstrates his training with a testable skill. This we may say, is training in the narrow sense, not an education—and many people today, without admitting it, prefer training to education, and they must have their heart’s desire. Much of the value of classics we must take on the witness of mellowed experience. Arguing this case now is partly an impressionistic exercise; it always has been. A firm knowledge of the classical languages, history, and culture will not of itself create virtue. It cannot shine a light into corners we have elected to keep dark, nor into those that cannot be illumined. But this knowledge can form the mind and light a path to understanding. For it is noble to rediscover and attend to the voices of the past. We ignore them to our peril and to the peril of all those whom we would presume to teach. Without a finely tuned and oft-nourished sense of the past, both near and distant, we have no culture.

Climbing Parnassus once helped to form the unformed mind. The arduous ascent fostered intellectual and aesthetic culture within 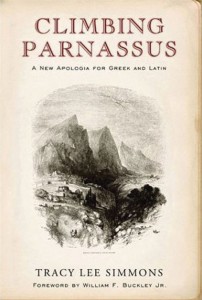 those who had endured the strain. It helped to bring mental and even emotional order out of chaos. And a classical training still provides the surest footing for the education of nations. The foundations of the modern world are viewed more competently from this height. Poetry, drama, democracy, idealism, scientific curiosity, and so much else furnishing our minds are better grasped, and better judged. We drift without classics, floating on our own deracinated exiguous islands. And we become fodder for demagogues. We need not a revolution, but a restoration.

The classical pursuit fosters gratitude for the fruits of the past and feeds the sense that we stand on the shoulders of giants. The student of history gains a means of judging other times seriously and fairly. He learns to see that a civilized culture is a delicately poised edifice, a fragile creation, erected with monumental exertion, yet easily destroyed. The historian Christopher Dawson once wrote that culture—in the older sense here—is “an artificial product. It is like a city that has been built up laboriously by the work of successive generations, not a jungle which has grown up spontaneously by the blind pressure of natural forces. It is the essence of culture that it is communicated and acquired, and although it is inherited by one generation from another, it is a social not a biological inheritance, a tradition of learning, an accumulated capital of knowledge.” And one, we may add, always in danger of perishing. The Greeks dream, in the words of Werner Jaeger, of “building a state so skillfully that it might keep strength and spirit in perpetual equipoise,” while recognizing that “even the most solid of earthly powers must vanish into the air, and that only the seemingly brittle splendor of the spirit can long endure.” The classical world is a richly instructive model of civilized life. We are bound as heirs to ask anew what made it great, with all its faults, and why it expired, with all its strengths. Who knows? We may find ourselves on the decks of our own listing ship someday.

Classical education again needs defending. We labor, after all, under the modern and, for this reason, rarely challenged belief that the classical world and its works have little to teach anyone but specialists, scholars, and teachers of classics. Let there be no mistake. For well over a century, classicists themselves have helped to create this fix. They have encouraged classical teaching emulating the methods of technicians. They have tried to habituate classics to the halls of science and, in doing so, have ignored or obscured those humanizing balms many of us believe classics to apply. If indeed classical study is to consist merely, and for everyone, in nothing but memorizing grammar or toting up the number of slaves lugging amphorae in the Athens of Pericles, then truly classics has become a domain of specialists only, warranting no more—though no less—reverence and respect than any other worthwhile scholarly pursuit. This is the way many professional classicists would have it be, to which we can say only that they have their reward.

Culture does not breathe on its own; it is preserved by those convinced of its value. This is not a new gospel. It is simply true. The classical vision has been renewed time and again down the long centuries after having been threatened with extinction by prophets touting their New Jerusalems.

For centuries classical education set about the task of teaching the noble arts of the mind and heart, and it can do so again. Those arts are not dead. They’re merely hibernating. A clever and ingenious world must find within itself once more the humility to learn—and to teach—those noble arts if any semblance of civilization, any shard of inner greatness, is to survive the havoc wrought by generations of aphasia and well-meaning neglect. We can regain our memory and tell its tales to those waiting to hear.

Tracy Lee Simmons is a journalist who writes widely on literary and cultural matters. He holds a master's degree in classics from Oxford.