If you were to walk into a gym today, you would see men and women doing repetitive exercises that are seemingly pointless. Take, for example, lifting weights. Someone who had never been to a gym before would be confused. “Why does he keep lifting that heavy piece of metal and putting it back where it was before?” he would ask. Then he would see a person running on a treadmill and exclaim, “But she is going nowhere!” “But they are getting fit,” we would say.

We constantly do things to reap their secondary benefits. We could be moving bales of hay—a productive activity—and thereby acquire a more attractive and healthy form, but instead we repeatedly lift blocks of metal that serve no other purpose than to increase the size of our muscles.

Latin is frequently viewed through this same lens. “Latin will increase your vocabulary!” we cry from the rooftops. “It teaches you how to think! It’s the real critical thinking program!” But some people ask a similar question to that which the gym visitor would ask: “Why not learn a modern language, then, and acquire the ability to communicate with another people while also acquiring these same benefits?”

While there are plenty of answers to this question that focus on those same skills, there is another answer: Virgil. And another: Cicero. And still more. Latin should be taught so that the student can read the classics of Western civilization in the original language. In fact, until the twentieth century, that was the only reason Latin was taught. The linguistic benefits were an extra boon, not the central goal.

Our predecessors were not incompetent at translation. They could have provided the classics in translation. They chose not to because they knew translation is an art, not a science. Words express concepts, and concepts often contain much more than the words signify. Consider the word “republic.” For us, it means a form of government in which elected officials choose what is best for the nation. For the Romans, it had the same significance but also literally meant “the public affair.” It was their joint project, something that expressed the nature of their community. Translating res publica as “republic” neuters it—and the concept brought to the mind of the modern English speaker differs significantly from the concept in the Roman mind.

Connotations also differ widely, but this too gets lost in translation. Ferus and agrestis both mean “wild,” but ferus (from which the English word “feral” is derived) refers to a more savage wildness, in contrast to agrestis, which has more of a rural feel. When the reader is confronted in translation with “The boy was wild,” he does not know which connotation to apply. 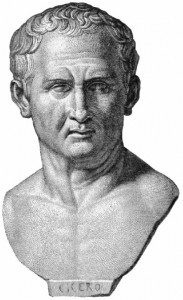 We can only emphasize our point by our tone of voice or by using italics, capital letters, or the like. Cicero, however, had the option of rearranging his sentences to serve his purpose. His language generally places the subject at the beginning of the sentence and the verb at the end. When he breaks typical Latin word order by moving the subject next to the verb, the effect is like the explosion of a firework. Just as we hear the whistle as it ascends before it lights the sky, the reader first gets a taste of what is to come, and then in a clarifying instant he hears and sees the beauty of Cicero’s communication. All this is lost in translation.

For these reasons, it is clear that every translation is an interpretation. Ostensibly the translator only interprets by word choice (e.g., whether “wild” is better than “savage”), and if that was the only issue, perhaps we could overcome these drawbacks by including myriad footnotes with the translation. However, the translator also struggles unconsciously with preconceived notions and personal tendencies. He does not translate in vacuo, as much as we would like him to. The selection of “wild” or “savage” does depend on the translator’s knowledge of the source language, but it is also affected by whether he likes or dislikes the character being described. When reading the Iliad in class, invariably there is a student who sees Achilles as the hero and another that reveres Hector. The translator will fall into one of those categories, and that will prejudice the translation—and the worst part about it is that the reader will be oblivious to this problem.

Poetry adds a host of new problems to translation. The translator, acting as a bridge from the author to us, must decide whether to put his translation into poetic form or into prose. If prose, then an integral part of the work is lost. If poetry, then, as Tracy Lee Simmons puts it, “The burden of translation is compounded, perhaps beyond the breaking point, with lyric poetry, which is, even in the best hands, not so much translated as guessed and poked at” (Climbing Parnassus, p. 219). In other words, because of the nature of poetry, which includes short and long syllables, rhyming patterns, imagery, and more, any attempt to translate it will be nothing more than an approximation.

There are so many works worth reading in Latin. I will never forget the time I was reading St. Augustine’s Confessions and found “Fecisti nos ad te et inquietum est cor nostrum donec requiescat in te.” It did not convey anything different from the familiar “You made us for yourself and our hearts are restless until they rest in you” (though the ad te does imply motion, making the meaning more like, “You made us to come to you”), but the beauty of the language struck me as something valuable and attractive beyond the concept that it transmitted.

Another moment ingrained in my memory was slaving through the opening lines of Virgil’s Aeneid. It was my introduction to Latin poetry, and at the time it was not enjoyable. But as I returned to it over the years, I entered the

ranks of those that loved the Aeneid for its lyrical beauty. “I sing of arms and a man” just does not have the same ring to it as “Arma virumque cano.” It is like Michelangelo’s Pieta—a glimpse of its beauty can be seen in photos, but beholding it in person reveals its irreproducible quality.

The fullness of so many of our culture’s greatest works are locked away in the treasure chest of Latin—as they should be. Who appreciates a treasure more than one who devoted his life to unlocking it? And who will appreciate Cicero’s Pro Archaia more than the student who has devoted at least four years to learning Cicero’s language?

Imagine how the works of Shakespeare must suffer when translated into another language. Can you even conceive of hearing “A rose by any other name would smell as sweet” in Spanish? Or “Haply I think on thee,—and then my state” from “Sonnet 29” in French? English works are meant to be read in English—for good authors are not called wordsmiths for naught.

Latin works should be read in Latin—and what a tragedy it would be for a student to spend two years or more mastering the language and never get to dialogue in the company of Augustine, Cicero, and Virgil.