When I was in graduate school, the literature department hosted a lecture on ecology, which is the science of our relationship to our surroundings. The speaker was promoting a book in which he proposed the elimination of the term “nature” from academia. Our use of the word, he asserted, fosters an imagined division between inside and outside. He denied the existence of any such division. There is no “in here” as opposed to “out there.” We are part of nature, he said, and so should have no word for it. Insomuch as this division between “in” and “out,” “here” and “there,” seemed to me the entire point of literary craft, I reacted to his lecture with two significant responses that have guided my reading ever since. The first was to find it odd that a literature department would welcome a thinker whose thoughts were so opposed to literature itself. (Readers should be wary of writers who empty words of meaning instead of filling them.) The second response led me to become a teacher, because at no other time have I learned more, while being taught less, than when I sought my master’s degree in literature at a modern university. The reason for this is fundamental. Because the value of books—and our cause in teaching them—depends upon a traditional definition of nature as authored and distinct from us, the modern denial of this results in a neglect of literary art itself.

Literature is a subject besieged by modernity, and nature is its citadel. The best approach to reading is one that assumes a traditional vision of the cosmos as created and prepared for us. This approach adheres to ancient notions. The modern approach, because it is irreligious, denies such supernatural or intentional preparation of nature. This controversy involves literature, for if the universe is not created, neither is a book. Naturalism implies that every creative decision has its source in the conflict of natural forces and not in the sovereignty of an author’s mind. Modern critics dismiss works of individual genius, preferring instead to analyze influence. The word “classic” has vanished from literary studies, even as “nature” threatens to. Yet today’s progressive literature departments, like logging companies, pride themselves in planting more words than they reap. Feminism, Marxism, psychoanalysis, post-colonialism, patriarchy, gender, race, and, of course, ecology, are now all literary terms. Academics assert that these are necessary to the study of the external forces that define a text’s morphology, alike to Darwin’s finches. Yet there is a division between an author’s mind and his surroundings, an inside and an outside. His very act of writing proves it. Adhering to his vision and not to any other, a writer defies external pressures. He has something to say, which is a quality of belief independent of circumstance. So the great authors themselves mount the staunchest resistance to modern literary studies, assuming a certain vision of nature by the very act of sharing it with readers. It is not the content but the form of literature that proves creation. Authorship is in harmony with a traditional view of the cosmos. 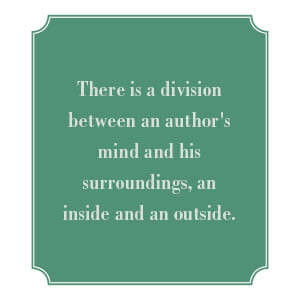 It is by this assumption that authors converse. Great books are not written from within nature, but exist instead as a commentary from without. An author’s portrayal of the world, which must be full of individual expression, constitutes an assertion about the universe itself. When we imagine the “great conversation,” we should picture great authors gathering at a window, gazing at the world outside. Everything depends on the window, which separates the creative author from authored creation.

Look outside. Each creature is fit to a place. Our wonder, which craves the diversity of the blue frog and the blind fish, depends on our surprise that, while strange to us, such creatures seem familiar to nature. We delight in the fitness of a fish, in that it needs no wings—unless it is a flying fish, in which case we would never wish it were a bird! Authors delight in well-made things. Nature provides them with an inexhaustible spring of imagery. So Dante likens his sinners to frogs, his saints to butterflies. Blake’s tiger burns where a lion could not. We wonder as nature displays its goodness. It is well-made. This is the window, the distinguishing fact; for man once fit in a garden too. Looking at nature, we see what we were and we imagine being what we no longer are. Our creative efforts aspire to Eden. We imitate that well-made place, for as every child sportsman has his hero, so each author has his. Writers read nature like a book, written by somebody wiser. They do not build nests; they build libraries. That is to say, they are not outside; rather, they are looking outside.

So why would a literature department seek to shatter the window through which we look? Why ban the word “nature?” Because that literature department does not believe in the Garden of Eden. The universe, they say, was not created and was therefore never perfectly “fit to a place.” Instead, it was born of social and geographical circumstance―the result of conflict, disharmony, and catastrophic big bangs, alike to the scientist’s vision of nature. Three outcomes follow from this view, each destructive to literary art.

First, this approach results in wretchedness, which offers but poor inspiration to write. Dickens speaks of the guillotine with a razor wit―we laugh our heads off. Not so with contemporary authors. It is not enough that we must suffer, we must do it without humor, for we must swallow every dark pronouncement. Second, modern literature talks itself into silence. It says there is no such thing as invention, and so stops inventing. Our guest lecturer made a fine example: to eliminate “nature” as a term requires its frequent use in his lecture. (Of course, though such a contradiction is quite human it is not natural, and that is the point.) Thirdly, the modern critic must preserve diversity in isolation, like Darwin’s finches, in order to analyze it at all. Each text must inhabit its own lonely isle of selective influence. The graduate classrooms in which I studied were defined by this isolation. Each student had his personal view, to be accepted by the class in the spirit of equality but never really responded to in conversation. Contemporary critics cannot see that authors must converse from a common window. Each has something to say about what we all see.

When we read, we gaze from this window through the most comprehensive pairs of eyes. They look out at creation, that well-made work to which their craft aspires. The lesson is seeing what great authors see. That is the literature teacher’s job. Students listen to Shakespeare because Dickens did, not because teachers tell them to. Science separates and classifies, which is essential to thought, but it is nature’s propriety that we think about. So we listen as each author turns from the window back to the room. Nature is in his mouth; he is naming its imagery even as Adam named its beasts. Only by this might we imagine ourselves.