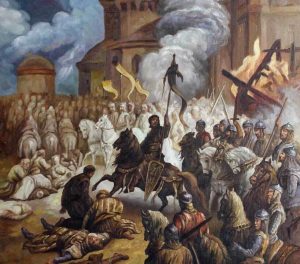 The Old Testament is replete with examples of God’s people conquering their enemies. They never fled, except as a ruse. When we discuss the issue of how Christians should deal with the writings of the pagans, that is an important thing to remember.

Culturally speaking, Christianity conquered Greece and Rome. And when you conquer something, you can do two things with the spoils of your conquest: destroy them or use them.

It is instructive to note what the Church, in fact, did. It did not destroy the classical civilization that it superceded. Instead, it took the cultural spoils and used them for itself.

A small handful of early fathers, such as Tertullian, asked what Athens had to do with Jerusalem, and some of these gave no definitive answer to the question. But as early as the second and third centuries, fathers like Clement and Origin argued that the works of the Greeks and the Romans did have something to do with Jerusalem and should not be categorically rejected, but instead used for the glory of God.

Not all of the learning of the ancients could be used in this way, of course. When the Israelites took of the spoils of their enemies, they presumably took those things that they could legitimately use, destroying those things (like their idols) that were an abomination.

And as the Roman Empire was crumbling, it was a man who was himself one of the greatest beneficiaries of classical culture and learning who became its greatest champion, a man who later would be called a saint.

St. Augustine, considered by many to be the greatest thinker of the first 1,000 years of the Church, spoke of the learning of the pagans as “Egyptian gold,” something which the Church not only could, but ought, to take unto itself and use.

It is no historical accident that, at the time of his conversion, Augustine occupied the highest academic position in Rome. He had received the best schooling a young man of his time could have, an education in which he drank deeply of the learning of Greece and Rome. His position as professor of rhetoric in Milan was not only academically prestigious; it required him to occasionally write speeches for the emperor.

His conversion marked not only a personal transformation—it wasn’t only Augustine who was baptized. Through his thought and writing, classical culture was itself baptized, and put to work championing, not military conquest, but spiritual conquest. The centuries following Augustine have often been called the “Dark Ages” because the fall of Rome brought about a time of cultural barbarism. During this time, monks toiled away in their monasteries, copying the manuscripts they had salvaged from this cultural catastrophe.

Thomas Cahill’s book, How the Irish Saved Civilization, recounts how, in isolated monasteries on outcrops of inaccessible rock, monks whose names we will never know devoted themselves to the preservation, not only of Christian works, but those of classical culture as well. Had it not been for the work of these great but unheralded men, most of this learning would have been lost.

This same attitude toward classical civilization characterized later medieval and Renaissance thinkers, as well as the Puritans and the American founding fathers. They knew that the truths discovered by the pagans were not pagan truths, but truths whose Author the pagans themselves did not know. They were truths taken, said Augustine, “from the mines of God’s providence,” and recaptured when Christianity conquered paganism.

Today we see this learning not only being abandoned, but actively undermined. As our schools become more devoted to things other than truth, it becomes more incumbent on us to champion truth.

It would be a great historical irony if, after having benefited from the spoils of cultural conquest, we would so easily throw `it all away.