Classical is a word that has interesting associations: something that has withstood the test of time, the best, something with form, structure, and beauty, like a symphony or classical architecture. When put this way, all parents want a classical education; they want the best, the education that is time-tested, the education that has form and structure, discipline, and beauty. It sounds good to parents who are tired of the latest innovations that never seem to work.

Why study old dead languages and civilizations? First of all, Latin is not dead. It is still read by millions of people in every nation, and most of the classics in Latin are still in print, and many new books such as The Grinch Who Stole Christmas and Winnie the Pooh have been translated into Latin. There are many dead and dying languages in this world, but there are no more influential languages in history than Latin and Greek. It is true that they are not used for everyday conversation, but it is completely false to characterize Latin and Greek as dead languages. They are not dead–they are truly immortal. 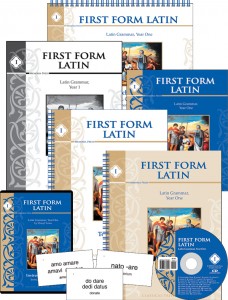 Yes, Latin helps with SAT scores. It does make learning a modern vocabulary easier. True, Latin is abundant in the technical vocabularies of the soft and hard sciences and law. A student of Latin should also gain a firmer grasp on English vocabulary by recognizing that all the big words come from Latin. While these benefits are impressive, they are minor compared to the real value of Latin. There are more important objectives that Latin achieves better than any other subject: The first is mental development, and the second is English language skills.

Latin develops the intellectual powers of the mind as no other subject can. Think of physical fitness, a student who is an athlete versus one who is a couch potato. The mind can be developed like the body. How does Latin do it? The best way to understand the power of Latin is to consider something you are probably familiar with–namely, math.

Math is systematic, organized, orderly, logical, and cumulative. In a cumulative study, each skill builds upon the previous one, nothing can be forgotten, everything must be remembered. All knowledge and skills are interrelated. The student continues to build a tower of learning block by block, until he has reached a very high level of skills and knowledge.

Math begins with memorization, computation, fractions, decimals, percent, word problems, and proceeds to problem solving, algebra, geometry, trig, and calculus. Math is hard because it builds so relentlessly year after year through every year of the child’s education. Any skill not mastered one year will make work difficult the next year. It is unforgiving. It has to be overlearned. That is why few students reach a high level in math. They reach a glass ceiling because the cumulative nature of the subject catches up with them. Eventually they are over their heads and quit.

How does math develop the intellectual powers of the mind? Math forms the mind of the student to accuracy, logical thinking, and problem solving. It is formation, not information. Math truly educates, transforms, and changes the mind of the student to become like math, orderly, logical, accurate, organized. The true purpose of education and all of the subjects we study in school is to develop, shape, and transform the mind and character of the student. The nature of the subject transfers its character to the student’s mind.

What is special about math? Math is a language, and a language is not really a subject. It is something much more basic and fundamental than a subject. Astronomy is a subject. The Civil War is a subject. Science, history, literature, government, and sociology are subjects. Subjects are by nature topical. Yes, there are basics to any subject, and, ideally, they are taught in as cumulative a way as possible. If a student doesn’t do well in world history one year, however, he can pick up and do fine the next year in American history. If he zones out during the cell structure, he can wake up and knock off an “A” in the classification system of plants. If he doesn’t get Hamlet, he can tune in for Macbeth. Subjects are not as demanding as languages and thus, will not produce the same caliber student.

Now what do we have on the language side of the curriculum that is comparable to and that balances the rigorous, challenging, cumulative, formative, study of math? Without Latin, the answer is “Nothing.”

Math is important, but it is secondary to language skills. In fact, math is dependent upon language skills. The math teacher teaches the concepts in words, and the mathematical symbols are used in place of words so they can be easily manipulated on paper. A truly educated person can be pretty lousy at math, because language skills are still the measure of the educated person, one who can speak and write with clarity and has power over his native language, English.

Latin provides the missing component in modern education, the systematic language training comparable to and balancing the mathematics side of the curriculum. Almost everything I said about math, you could have substituted Latin for, but not English, science, history, nor French.

Why not English grammar? English is not a classical language; it does not have the structure or form, the logic or the rules. It would be like studying modern architecture or pop music, rather than classical architecture or classical music. English doesn’t follow the rules. The Romans were disciplined, and their language marched in columns, row after row, like soldiers. English is lax and loose, bending and changing wherever it fits our fancy. We are an independent, liberty-loving people, and our language shows it. Languages reflect the culture of the people who speak them. The language influences the character of the people of a nation–and likewise the language is influenced by the people.

Furthermore, students have a very difficult time studying their own language. Students have grown up with their own language; they take it for granted; they are bored by it. They are amazingly reluctant to analyze it because they can already put it to practical use instinctively. Beyond that, English grammar is abstract, whereas Latin is concrete. In Latin, you know the direct object because it is in the accusative case. In English, you have to figure it out based on the context. By teaching a language that is very different from English, the student, for the first time, really starts to see how his own language works. His own language comes alive.

What about modern languages? Like English, they are not classical; they lack the structure, form, and logical order of the classical languages. The classical languages-Latin and Greek-are so different from modern languages that they seem strange to students. They open up a whole new world and give students the ability to think about language–a very difficult task since students use language naturally. The indirect method of instruction works best with languages. Studying another language, a classical language, makes your own come to life. It allows the student to contrast and compare, to see the function of each part of speech and its role in our language. It’s like putting on 3-D glasses, so that you can see how your own language works.

Latin develops and enlarges the mind to a far greater degree than math and brings the necessary balance to the curriculum. The study of Latin is a complete education in that it develops the intellectual powers of the mind and, at the same time, develops English language skills far more effectively than English grammar, thus achieving the two most important goals of education at the same time.

Latin, like math, gives the student the experience of studying one subject to a mastery level. This is what is missing in modern education, where we try to teach everything and we cover too many subjects too superficially. The student is always on the surface, always a beginner, just stuffing in a lot of unrelated facts. There are few opportunities to use higher order thinking skills when you are merely a novice. It is only when the student has studied a subject enough to have some depth that his mind can be stretched and challenged with higher order thinking skills. Latin and math give students the invaluable experience of studying one systematic subject to a mastery level over a long period of time, K-12 and beyond. This is a key to mental and character development and is the most valuable academic experience a child can have in school.

Latin and math, when taught to a mastery level, teach the student how to climb the mountain of learning. And if a student climbs one mountain, he knows what it takes to get to the top, and he will be prepared to climb all of the

mountains that he will meet in life.

What does it take to get to the top of the mountain? Is it great intelligence? No. It takes perseverance, hard work, stamina, will, grit. It takes a plan, a never-give-up attitude, wits, flexibility, and preparation. The education process is like sports; the teacher is a coach who can take the student to the top, the summit of his ability and prepare him for life. Latin takes the student to the top of Mt. Parnassus to survey the grassy plains below, where he frolicked as a child, and calls him to remember how little he knew years ago when he thought he knew everything. It says, “Now that you have done it once, you can overcome any future challenge you may meet.”