Saint Valentine by Robert Sabuda tells the story of the real Saint Valentine who lived in ancient Rome and worked as a doctor, tenderly and generously caring for his patients. Valentine was also a Christian who diligently prayed for everyone he served. One day, a Roman jailer brought his daughter to Valentine and asked him to heal her of her blindness. Throughout the little girl’s treatment, Valentine came to care deeply for the jailer and his daughter. When Christians throughout Rome were arrested and Valentine was condemned to death, his parting note to the jailer’s daughter inspired the holiday we now celebrate as Saint Valentine’s Day.

Saint Valentine by Robert Sabuda features mosaic illustrations made from marbleized and hand-painted papers. This book is included in our Second Grade Read-Aloud Set. 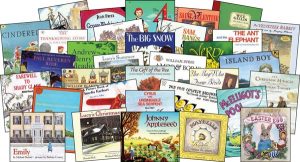