From the publisher: Benjamin Franklin was one of the busiest men in the American colonies. Through his own hard work, he established a printing business in Philadelphia. He was also a postmaster, an inventor, a writer, and a diplomat. When people in the colonies were fed up with English taxes, Ben went to England to try to prevent war. But when war seemed unavoidable, he supported America in the Continental Congress. Like the timeless adages from his Poor Richard’s Almanac, Ben Franklin still sets an example for Americans today. 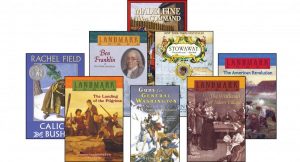