In 1969, philosopher Henry Veatch wrote a book called Two Logics: The Conflict Between Classical and Neo-Analytic Philosophy. It scandalized the philosophical establishment of the day.

The book challenged the underlying assumptions behind the new logic that had been taught in colleges and universities for over fifty years. The issues addressed in the book were complex, but the main issue was clear: There was a difference between modern and classical logic, and this difference constituted a clash of worldviews.

Most people who have been to college have encountered modern logic somewhere along the way, usually in a mathematics class. While traditional or classical logic sticks close to human language, modern logic favors formulations such as “P ⊃ Q” (which means “If P, then Q”), “P ∨ Q” (“Either P or Q”), and “P ∧ Q” (“P and Q”).

In practice, the systems look very different. The symbolic, mathematical look of modern logic is a striking contrast to the traditional logic’s emphasis of ordinary human language. It was Veatch’s point that the difference between the two systems was not just cosmetic—that, in fact, modern logic reflects a particular worldview, one much different than that assumed by traditional logic.

Modern logic was a product of the logical positivism that became popular in the 1920s through the work of Bertrand Russell, Ludwig Wittgenstein, and A. J. Ayer (this was the “neo-analytic philosophy” of Veatch’s title).
In one sense, logical positivism was an outworking in philosophy of the religion of science—the idea that the only legitimate avenue to truth was through either mathematics or natural science. In the case of the positivists, this took the form of the belief that the only logically meaningful statements were either statements that were true by definition or statements that could be empirically verified.

It was this view of meaning and language that flowed into the development of modern logic. Its central manifesto was the book Principia Mathematica, written by Bertrand Russell and Alfred North Whitehead, a book that became required reading in philosophy programs until the late twentieth century. And lurking in the authorial background was Wittgenstein, whose book Tractatus Logico-Philosophicus had infiltrated the thinking of the two authors.

The Tractatus, as it came to be known, cast a sterile and frightening vision of a world bereft of meaning and purpose. “The world,” said Wittgenstein, “is everything that is the case.” In other words, the only meaning in the world is formal logical meaning, which consists exclusively of definitional and scientific truths as they are expressed in logical propositions.

For the logical positivists, truth was merely a property of propositions. Under this philosophical regime, “truth” became “truth value”—the assigning to a statement of either a “T” (True) or an “F” (False). In fact, it was Wittgenstein who invented “truth tables,” a mechanism of modern logic whereby the truth or falsity of a statement could be determined solely on the basis of the truth value of its components. 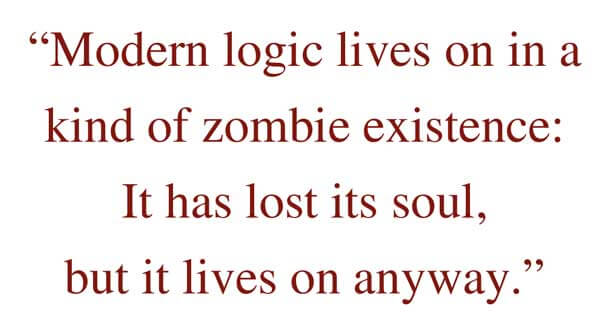 In other words, the truth of a statement like “It is sunny (P) and hot outside (Q)” is true if, on the one hand, P is true, and if, on the other hand, Q is also true. But if either P or Q are not true, or if neither is true, then the whole statement is false.

Quantifying language in this way allowed the positivists to make all meaningful language into a sort of calculus: You could “solve” for the truth value in the same way you “solve” an equation in mathematics. In fact, all computer languages are based on modern logic.

The positivists, of course, were mostly atheistic as well, and so there was the additional benefit that religious language was rendered meaningless.

What Russell and Whitehead thought they had discovered was a purely scientific language which encompassed all meaningful statements which could then be used to solve all scientific problems. Such a language had been a dream of modern philosophers since at least Gottfried Leibniz in the eighteenth century.

Although this system of logic went on to displace the old Aristotelian system in colleges and universities, at least one of the original authors, as well as Wittgenstein himself, later repudiated many of the key assumptions behind the Principia. Not only that, but the philosophy that produced it (logical positivism) has since gone out of fashion among many professional philosophers.

The philosophical establishment never answered Veatch’s challenge 40 years ago, and the system of modern logic he defied is still studied and taught today, but with little understanding of its now-rejected foundation. It continues to live on in a kind of zombie existence: It has lost its soul, but it lives on anyway. It has become the philosophical equivalent of The Walking Dead.

Traditional logic is not a calculus by which we can “solve” for the truth. Modern logic speaks the language of the computer, which was created by men; traditional logic speaks the language of men, who were created by God. While modern logic is how computers think, traditional logic is how human beings think. We are not computational beings and our language is not some kind of mathematical calculus. When we think and speak and write, we do it not as human machines, but as logocentric (language-centered) creatures. And we need a logic that takes this into account.