If I see my logic program listed in the math section of catalogs one more time, I’m going to pull out my hair!

Not that they’re trying to make me mad or anything. In fact, they’re just trying to sell my book, and they probably think that ought to make me happy, and they’re right.

So what’s my problem? Why would it bother me that people think logic is math?

Well, first of all, logic isn’t math. And, second, the fact that many people think so is an indication of how much we are influenced by modern philosophy—and how far we have come from a classical Christian view of reality.

Indeed, when most people think of logic, they think almost exclusively of the modern system, because that is what most logic programs teach. If you pick up any popular college text, you will find that, although it includes a small section on traditional logic, most of the book is focused on the modern symbolic logic.

The difference between the two systems of logic is quite dramatic, but most people can recognize the modern system because of its prolific use of symbols, in addition to common modern fixtures, such as truth tables and Venn diagrams.

These things are almost entirely absent from the traditional system. There isn’t enough room here to explain why that is, but there are very good reasons for it. The question I want to ask and answer here is this: If logic is not math, then what is it? The answer, of course, is that logic is about finding truth with words, not symbols and with language, not math. I cannot stress this point strongly enough. For classical educators, this point is absolutely crucial because it will determine the very makeup of their curriculum.

Classical educators have always known that the Trivium is about language. Grammar teaches the structure of language; logic teaches right reasoning with language; and rhetoric teaches the adornment of language with power and beauty for persuasion.

A cursory look at how the Trivium was actually used will suffice to establish my point. What kind of logic
was used in the Middle Ages, when classical education was at its zenith? The answer, of course, is traditional
logic. In fact, modern symbolic logic is the creation of modern philosophers, such as Bertrand Russell, a 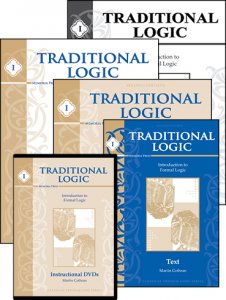 nd didn’t even exist until the turn of the 20th century.

Can we simply take the modern system of logic and place it in the Trivium? The first answer is, simply, no—not if we believe the Trivium is about language, which it most certainly is. But we could also answer the question—whether we should replace the traditional with the modern system of logic—with a question: Why would we want to? Is there something
wrong with the traditional system that would require us to do this?
Modern secular thinkers, such as Frege and Russell, might say that there is (in fact, Russell said exactly that in no uncertain terms). Are we then justified in replacing the traditional system with the modern? Only, of course, if we accept their assumptions.

We are not obligated to cast our reasoning into wholly mathematical terms in order to escape the common sense implications of language. In fact, the idea would have been fundamentally alien to the classical educators of the past. Traditional logic preserves the ancient common sense view of the world, which is why it stays with language.