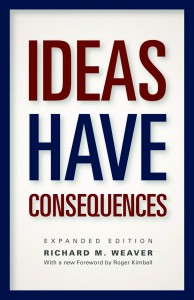 Though written in the late 1940s, Ideas Have Consequences, by Richard M. Weaver, remains more relevant and prescient than ever. The work, grounded in political philosophy, theology, virtue, and history, presents a piercing assessment of modern culture. Yet these fields are incorporated for the sole purpose of revealing the truth about our modern culture and way of thought. Thus, the work is not filled with academic jargon, but straight truth for the common thinker and scholar alike.

In the book, Weaver locates the beginning of the decline of the West in William of Occam’s nominalism in the fourteenth century, which denies that universals and abstract objects have any existence or reality; only particular, concrete things are real. What follows is a rejection of absolute truth, since no truth can exist outside of man—outside of physical, particular things.

Weaver traces the decline teleologically, by a string of “consequences” that follow from the mistaken idea of nominalism. These consequences are presented in each chapter, beginning with the negation and erosion of “distinction and hierarchy,” essential notions for the preservation of society. The fallacious idea of “equality” is untenable and deceptive, creating a society of confusion, alienation, and self-promotion—as Plato says, “a ‘democracy’ filled with wonderful variety and disorder.” Instead, Weaver suggests the much older and reliable concept of fraternity—brotherhood—which goes “immeasurably deeper in human sentiment,” an organic social order of uniting parts that are distinct.

Further consequences are presented in the chapters “Fragmentation and Obsession,” “Egotism in Work and Art,” and “The Great Stereopticon,” a phrase that encapsulates the technology and media construct that manipulates the worldview of society, separating us from reality, truth, and our humanity. “This deceitful construct keeps the ordinary citizen from perceiving the vanity of his bookkeeping and the emptiness of his domestic felicities,” i.e., his materialism and consumerism.

Though the diagnosis is dire and horrifying, Weaver does offer a measure of hope. The first means of reform is to preserve the right to private property, “the last metaphysical right,” which is “a sanctuary, a self-justifying right.” The second is to restore meaning to language, which he outlines in “The Power of the Word.” He professes that a “divine element is present in language, …  that speech is the vehicle of order, … and that all education is learning to name rightly.” This chapter fruitfully parallels Wendell Berry’s superb collection Standing By Words.

In the closing chapter, Weaver exhorts a return to piety, justice, and reverence—virtues that restore in us a proper relationship to nature, our neighbors, and the past.

Ideas Have Consequences should scare the cultural deception right out of us, offering radical clarity, repair of sentiment, and redress of soul.

David M. Wright is the Writer and Director of the Upper-School Literature at Memoria Press. He has taught AP Literature and English with a focus on the Great Books for the last ten years. He received his master’s degree in English Lit. from DePaul University, and is currently working on a PhD at the Univ. of Louisville. He is the Founder and Director of the annual Climacus Conference.