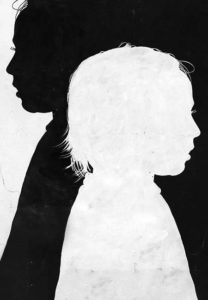 I once rescued my autistic grandson from a pack of bullies at church, so I have his undying devotion. He calls me via FaceTime just about every day and tells me everything going on in his life. (I recount what follows with his and his parents’ permission.)

My grandson is a sweet young man, but when crossed he can fly off into out-of-control rages. Sometimes this can include punching and hitting with whatever he can get his hands on. This scares me, especially considering how his little sisters and brothers can annoy him—and especially after he became a big, strong teenager.

After these episodes, though, he is always conscience-stricken. He knows his catechism, likes to go to church, and pores over his children’s Bible. So I was not too surprised when he put his bad behavior into a spiritual context. “The devil tempts me,” he would tell me. “I always do what he wants.” That really scared me.

I tried to dig down into why he sometimes tries to hurt his siblings and why he obeys the devil. “I want to win,” he would tell me. “I always lose, but the devil helps me win.”

Finally, it occurred to me, retired English professor that I am, to draw on stories. “In the Star Wars movies and all of the other stories that you love, who always wins?” I asked him. “The good guy or the bad guy?”

Judging from his expression he seemed to be taken aback. “The good guy.”

“Right!” I told him. “The good guy wins and the bad guy loses. So if you want to win, you need to be the good guy!”

Yes, I know, the good guy doesn’t always win, either in this world or in all stories, including classic literature. But this is a general rule in traditional and popular stories. Even modern stories that favor the “bad guys” usually do so by making the anti-hero seem “good” in some way.

Over the course of many FaceTime calls, we discussed the difference between good characters, who help and protect others, and bad characters, who are selfish and hurt others. We did so with the help of Star Wars. I am aware of the theological problems with “the Force,” with its “light side” and “dark side.” But light and darkness are also Christian categories, as we see particularly in John’s Gospel and Epistles. So I was able to Christianize the imagery: “The devil is darkness. Jesus is the light.”

But it was my grandson himself who came to the key realization: “Darth Vader”—his favorite character—”used to be good, when he was Anakin Skywalker. But then he became bad when he turned to the dark side. But at the end of Return of the Jedi, he becomes good again when he saves Luke and throws Emperor Palpatine down the reactor shaft. He turns back to the light because he loves his son!”

The “bad guy” is not simply defeated, he is transformed. He becomes a “good guy.” Jesus is not just the ultimate hero who defeats the villain; He is the Savior who saves the villainous, which all of us are. As our everyday experience, the best stories, and the Bible make clear, light puts an end to darkness. “I have come into the world as light, so that whoever believes in me may not remain in darkness” (John 12:46).

Nor is Christianity simply about being good instead of bad. Rather, Jesus redeems us “bad guys” by taking on our badness, paying our penalty, and giving us His goodness.

I had to supplement Star Wars with the catechism, the Bible, and the meaning of church, but Star Wars got us started in a way that immediately engaged my grandson’s imagination.

We also discussed other stories he liked. He is a fan of Open Season, an animated feature about a deer named Elliot and a bear named Boog. My grandson brought up a scene in which Elliot is bullied by a much larger deer named Ian, who calls him “Smelliot” and mocks him for having lost an antler. We agreed that the scene is really funny, but it also has a very relevant meaning.

My grandson knows what it is like to be bullied, but he had also developed the bad habit of bullying his little brother. The movie showed him what bullying looks like and why it is so wrong. “The devil is a bully,” I pointed out. “You don’t want to be like that to your brother.” And he agreed.

He brought up how the big one is picking on the little one, and how the bear Boog stands up for his friend and the girl deer Giselle comforts Elliot by saying that his antler will grow back. We should be like them. At the end, when Elliot helps defeat the bad guy poacher, the bully, Ian, in another transformation, “learns his lesson” and accepts the smaller deer back into the herd. My grandson made the connection, saying, “I learn my lessons too!”

Another of his favorites is the Walt Disney version of Robin Hood. My grandson thinks Prince John, an adult lion who sucks his thumb and throws tantrums like a baby, is hilarious. This led to conversations about growing up, acting your age, and becoming mature. My grandson’s critique of this comical villain is that “he never tries new things, doesn’t do his lessons, won’t leave his castle, and is mean to Hiss [his advisor snake] and Skippy [the little rabbit he robs].” As my grandson ridicules this phony king of England, he is also repudiating some of his own behavior. 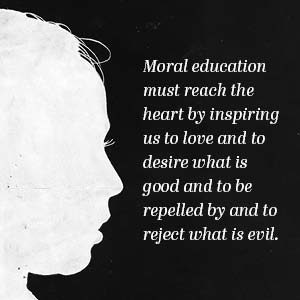 His behavior, I am told, has improved greatly—he no longer hits—as has his attitude. In our FaceTime talks, he reports on “good deeds” that he has done and says how he now enjoys “getting along” with his siblings, though he is still “working on” that. He sometimes “slips up,” as he says, but he tells me all about it, whereupon we ask Jesus for forgiveness and, he says, “I become good again.”

Stories can influence my grandson for the good, but they can also influence him negatively. He started swearing. “Where did you learn words like that?” I asked him. “Back to the Future,” he explained. I suppose I have become so jaded that I didn’t even realize that problem with the Michael J. Fox movie. It took some doing to make it clear that he should only imitate the good things in stories, though some of them have bad things. “Why do filmmakers put in those negative elements?” he asked, using a term I used. “That’s a great question,” I told him. “I don’t think they are Christians,” he responded, in a great answer.

Star Wars, Open Season, and Disney’s Robin Hood are not Homer, just stories that appeal to my grandson. But what I have been describing is a classical approach to story, drawing on its universal human elements, and a classical use of story, to engage the moral imagination.

Teaching morality—whether to a child with special needs or to anyone—is not just a matter of conveying information to the intellect. Human beings pretty much know, deep inside, what actions are good and what actions are evil. Moral education must reach the heart by inspiring us to love and to desire what is good and to be repelled by and to reject what is evil.

As the Christian writer and professor William K. Kilpatrick has shown in several of his books, the way this was achieved, historically, was through stories. These imaginary slices of life raise moral situations in a concrete way, showing us the beauty of goodness and the ugliness of evil, and giving us models to emulate in our own lives. And sometimes they can show redemption.

My grandson sees his own life in terms of his stories. He now says, “I used to be good, when I was little, but then I turned to the dark side. Now, though, I’ve changed and I’m on the light side. And I’m never going back! I have thrown the devil down the reactor shaft!”

Dr. Gene Edward Veith is professor of literature emeritus at Patrick Henry College. He received his Ph.D. in English from the University of Kansas, served as professor of English at Concordia University Wisconsin, and holds several honorary doctorates from Concordia Theological Seminary.