The Golden Egg Book by Margaret Wise Brown tells the story of a little bunny who finds an egg. The bunny begins to imagine all the different things that could be inside the egg. He tries to open the egg by jumping on it, kicking it, rolling it down a hill, and throwing acorns and small rocks at it. Eventually, the bunny gets so sleepy he curls up next to the egg and falls asleep. While he’s sleeping, a little yellow duck hatches from the egg. The duckling wants to wake the bunny up so he jumps on him, throws a tiny rock, and rolls him down a hill. Finally, the bunny wakes up! The duck and the bunny become friends and never have to be alone again.

The Golden Egg Book is Big Little Golden Book by Margaret Wise Brown. It features the brightly floral illustrations of Leonard Weisgard. This book is included in our Junior Kindergarten Read-Aloud Set. 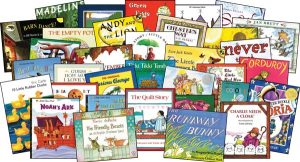 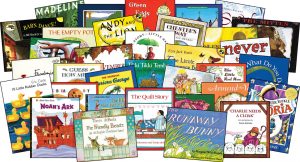