Patrick: Patron Saint of Ireland by Tomie dePaola tells the story of Saint Patrick. Patrick lived in Britain during Roman rule, but one day he was captured and sold as a slave in Ireland. During his time as a shepherding slave, Patrick’s faith in God grew stronger. Eventually Patrick miraculously escaped and returned to Britain. However, God called Patrick to return to the island he had escaped from as a missionary. This book details through prose and beautiful illustrations the many miraculous events which occurred in the life of Saint Patrick and the lasting impact he had on the land of Ireland.

Patrick: Patron Saint of Ireland by Tomie dePaola features the iconic artwork of the author. This book is included in our First Grade Read-Aloud Set.

Be the first to review “Patrick: Patron Saint of Ireland” Cancel reply 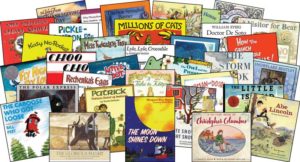