From the publisher:  Have you ever noticed how blue Earth looks in photographs taken from space? This is because of our oceans. Earth is the only planet in our solar system with water on its surface—more than 200 quadrillion tons of water—and it’s constantly in motion. You don’t have to live near the ocean to know its power. Changes in temperature far out in the sea can cause a drought thousands of miles away. The oceans affect us all. Award-winning science writer Seymour Simon brings you an in-depth exploration of the oceans.

Be the first to review “Oceans” Cancel reply 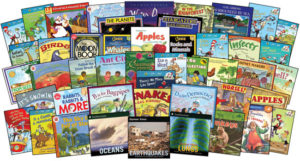